The Story of My People: Part 9: A-Game

"Ugh! It's Fluffy!" I respond, disgusted at having to constantly correct A-Game and Valley Girl. They're both pretending to forget my name — on purpose — just to aggravate me. I know it.

And that's how I met the one and only A-Game. I was taking a break at some scenic overlook on Hat Creek Rim, just south of Mt. Shasta. I had stopped to pop and close up some blisters on my feet, and A-Game and Valley were already there chit-chatting with Monster and Peanut. I think the four of them were all in the process of editing my trail name for the billionth time.

A-Game strolled up, dropped her pack, and just jumped in.

A-Game is the third of four red-heads I befriended on trail. First Allen, then Tim, then A-Game, and finally Joe Dirt. Like Tim, A-Game could tan, making her a "unicorn", as Tim (Peanut's boyfriend) called it. OK, sure. Sounds cool.

After our brief encounter at the scenic overlook south of Mt. Shasta, I saw A-Game on and off after that. Peanut, Lt. Dan, and I were in a group of our own, and she was hiking with another, slightly larger, group. From time to time, our groups would hang out together during a break or at lunch.

At Porcupine Lake we went swimming together. I was standing waist deep in the lake with Peanut, both of us psyching ourselves into submerging under the frigid water. A-Game strolled up, dropped her pack, and just jumped in. Swimming was her thing. She'd try to stop and swim at as many swimming holes, lakes, and ponds as she could. She must have set some kind of PCT record for most locations swum, or something. Is that a word? Swum? A-Game would know. She's one of the most read people I've ever met. She'd leave bits of poetry and book quotes in the trail logs. I thought that was pretty cool, and wish I'd have thought of that.

The alpine lakes in Northern California have been lovely. It's been tricky to get action shots of all of our swimming adventures. My friends Thunder Fluff and Lt. Dan really helped to capture one of the best swims of the season. Porcupine Lake, Shasta National Forest. #stayingfound #liketotally #fersurefersure

Roi and I, photo-bombing at Porcupine Lake.

Our two groups would play leap frog for a few hundred miles. It wasn't long before we had so much fun together that we just merged into a PCT Power Group, to coin a phrase. This late in the trail, we were all self-sufficient, professional (but unpaid) hikers, or so I told myself. Everyone in the super group was comfortable hiking the trail by this point, and that made it easy to get along.

The first time I remember our super group camping together was the night after hiking the West Rim trail at Crater Lake. We left the Rim Village together, only to spread out along the trail during the day. Eventually, we all clumped together that evening at a crossroads on the trail. We found beer in a roadside bear box that night and A-Game gathered some snow to cool it down. We sat around the world's smokiest fire laughing and telling stories until we could take the mosquitoes no longer. What a fantastic night that was.

The next time I saw A-Game was Bend, OR, also known as The Promised Land. That's what we called it. Everyone was putting off zeroes until Bend, where we'd all take a few zeroes in a row — together.

Live music at Crux in Bend, OR

We split up for a few days after that, but in White Pass, WA, A-Game walked out of the forest to join Donkey, Pollywog, Peanut, Joe Dirt, and I for the remainder of Washington. As friends, we would walk together through the beauty of Washington to the Northern Terminus of the Pacific Crest Trail and on into Canada.

Hiking with A-Game was sometimes an exercise in, well, I don't know, but Donkey once called her "bonkers." One time, later in the evening, the six of us stopped briefly to take a water break and plan how far we'd go the rest of the evening. As is the custom of breaks, very little of it has anything to do with making plans. It usually devolves into banter about this or that. This time this-or-that consisted of A-Game making the claim that "cats are more affectionate than dogs." Donkey let her finish her statements and then took the floor to address the group.

"Ok," he said completely deadpan, "Can we all agree that that statement (thrusting an accusatory finger toward A-Game) is completely bonkers?!" His voice raising at the end.

There was a brief awkward pause as Donkey made eye contact with everyone in the group, and then laughter erupted. Well, that's the way I remember it anyway. Poor A-Game! She never lived that down for the rest of the trail.

A-Game would later provide video evidence that her cat is, point of fact, affectionate.

sound up for full effect. holding hands with my favorite lump of fuzz. promise i am popular and well liked by some humans too.

I hiked the rest of Washington with A-Game. She always had a story to tell about whatever topic came up. She'd often regale us with long stories about home, being a backcountry ski guide, or stories from the Appalachian Trail. Her stories only served as further evidence that she was independent, and I think that's what admired about her most. We would all give her grief from time to time about mansplaining, or her cat, or microagressions inherent in the kid's game Cops and Robbers, but she was a good sport. Lord knows you had to be in this group — Joe Dirt and Donkey could be merciless when they smelled an opportunity for a joke. When there's blood in the water, go for the joke. 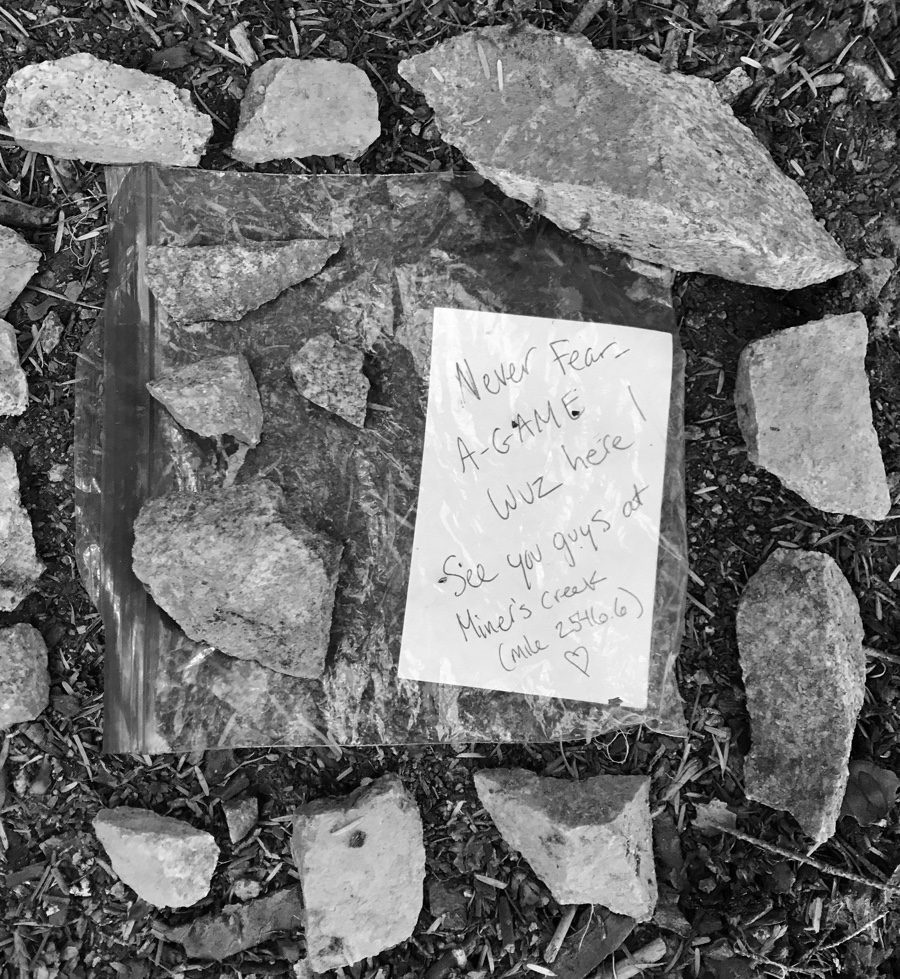 She cut across a river — alone — just to catch up with the group.

A-Game had her stuff together in ways I simply didn't. From hiking to packing up in the morning to resupplying to fixing dinner at night. She seemed to do it all with ease. She was tough, and smart, and she knew it. She seemed to handle any sort of trail conditions with a grace that I could never seem to master. This was her second long distance trail, making her a more professional hiker than I was (or rather, claimed to be). I admit I was a little jealous sometimes, but mostly impressed most of the time.

Having already thru-hiked the Appalachian Trail, A-Game was also more prepared than I was. Somewhere around Ollalie Lake, I was suffering through a pretty bad shin splint in my right leg, and really didn't know how to deal with it and keep walking North. When A-Game found about my situation, she grabbed my leg, propped it up, and started applying KT tape—just because that's who she was. That small act probably saved my thru-hike and I am forever grateful to her for that. 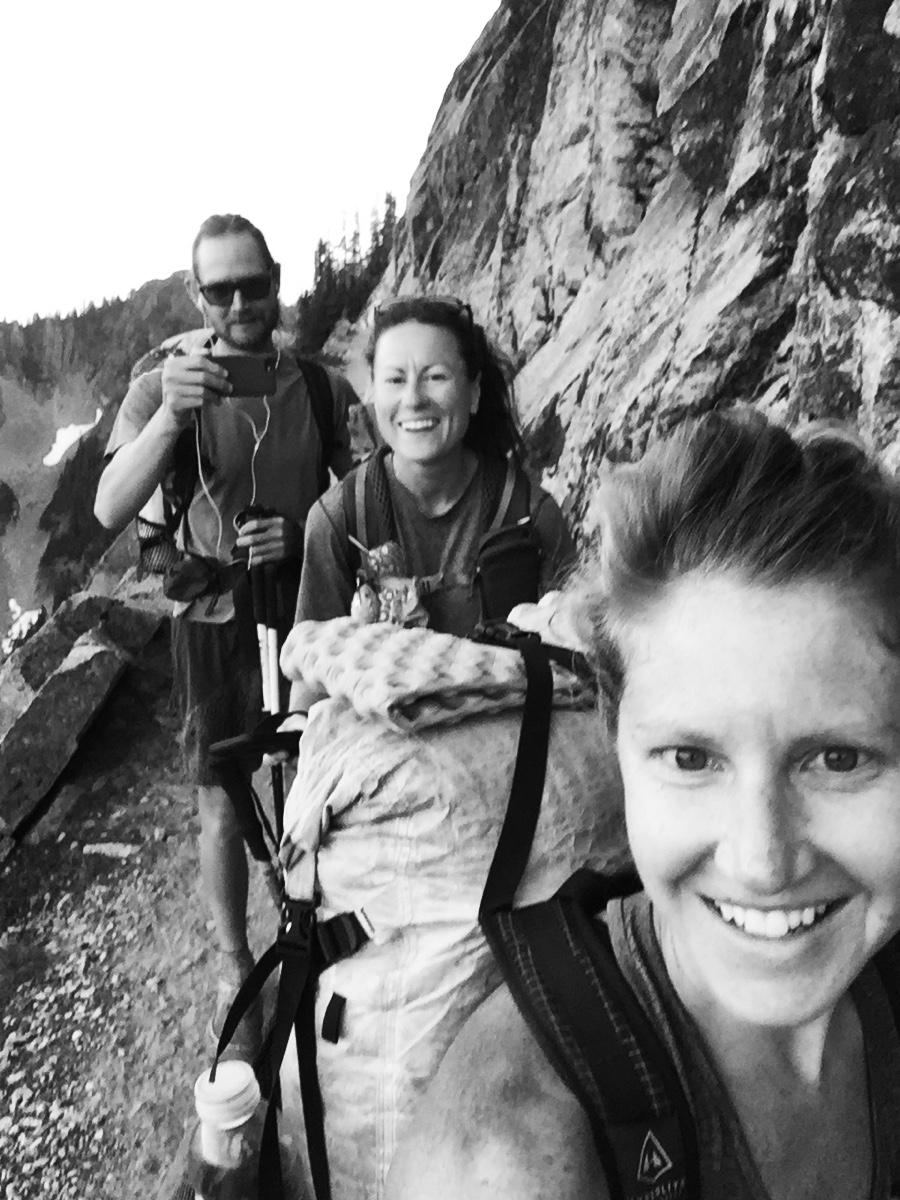 Washington went by quickly. Too quickly. I was with people I loved and I think that made life, and the trail, fly right by. Suddenly, we all found ourselves standing at the Northern Terminus, staring at the monument. I, for one, was a little dumbfounded and slightly confused. This was it. I had hiked so far and now I didn't know what to do or how to feel. A-Game, on the other hand, knew exactly what to do. She popped a beer and posed for photos. Professional hiker, folks. 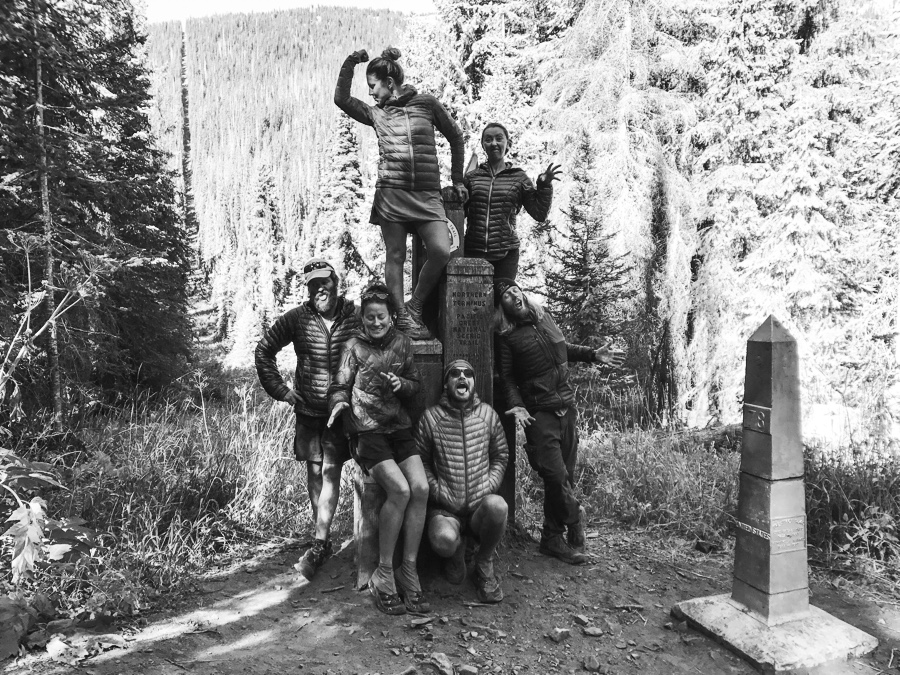 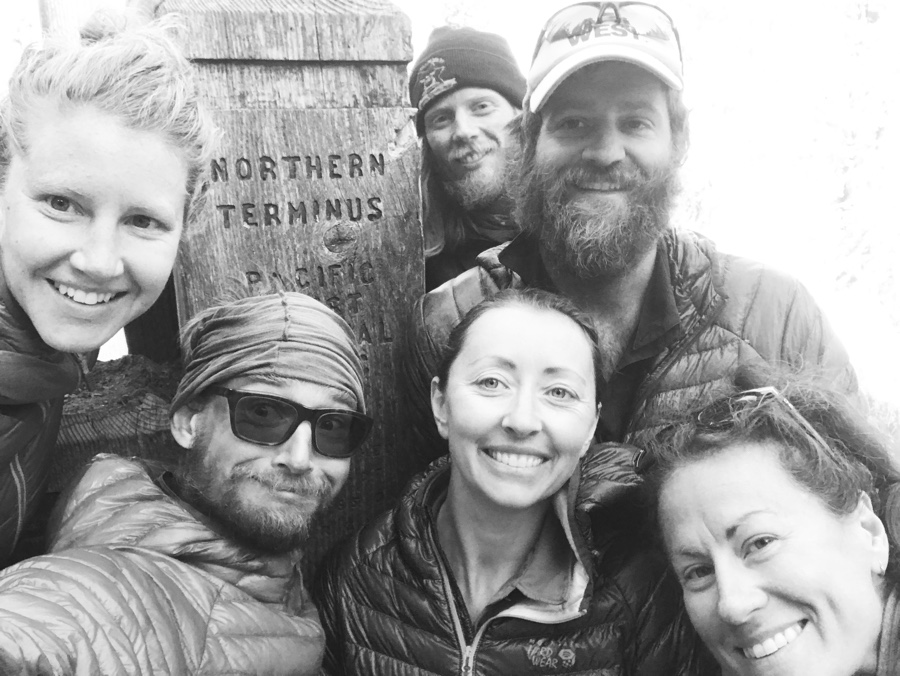 A-Game's entry into the log book at the Northern Terminus

From here, Peanut, Joe Dirt, A-Game and I would all go back to the Sierra to finish up, but A-Game was doing it SoBo, with the rest of us going NoBo. At least I got to see her one more time in Toulumne Meadows. It was heartwarming to see a friend one last time before bringing an end to such an epic tale.