Valley. Girl. A girl from The Valley, am-I-right? That's like totally gotta be it. Like, fer sure. Um... like, not even. Valley Girl is an up-talking, not-from-the-valley-or-even-from-California guy. A man's

Valley. Girl. A girl from The Valley, am-I-right? That's like totally gotta be it. Like, fer sure.

Valley Girl is an up-talking, not-from-the-valley-or-even-from-California guy. A man's man—who wears a hiking skirt. He is a newly christened Triple Crowner, having thru-hiked the Appalachian Trail, the Continental Divide Trail, and the Pacific Crest Trail. He spends his summers in the Northern hemisphere in Alaska and his summers in the Southern hemisphere in Antarctica.

Yep. Didn't see that coming, now did ya?

To be clear, like totally and fer sure, fer sure are staples of Valley Girl's vocabulary. Nary a day went by where he did not utter those simple words, so "Valley Girl" was absolutely an appropriate appellation. If he weren't the most positive human being I've ever met, I half expected him to say things like "What's yer damage?" or "Gag me with spoon!"

The first words Valley said to me was "Fluffy expletive? Fuzzy another-expletive?"

Sigh "No," I said, tired of correcting Valley and A-Game. "It's just Fluffy. It's not hard. Repeat after me: Fluffy."

Valley would pretend to forget my name for the next 200 miles, until he finally settled on Thunder Fluff, which is an awesome trail name. Thanks Valley.

I had seen Valley a few times before meeting him formally at the scenic overlook at Hat Creek Rim where he griefed me over my trail name. He was hiking with another rival group. We would leap frog each other on trail for a few hundred miles, before our two groups merged into a PCT Power Group. That's not really a thing, but it sounds cool.

I got the impression that Valley loved his breaks. Whenever he would get ahead of my small group, we would inevitably catch up with him sunning himself, cross-legged, and sitting on the side of the trail—shirtless, hatless, shoeless, and sockless—rocking nothing but a hiking skirt and sunglasses. I always imagined the moment he stopped for a break that his clothes would explode off from him and onto the nearest bush or tree to dry in the sun. It wasn't long before I started to do the same thing; I'd stop to take a break and immediately take off almost all of my clothes. What can I say? NorCal and Oregon were hot.

At Mazama Village below Crater Lake, I found him chillin' outside the General Store wrapped in nothing but a filthy Tyvek groundsheet while he waited for his laundry to finish. To be honest, at that point in the trail, nothing was shocking for me anymore. I would have done the same thing in his situation. That same day, Peanut discovered that her resupply box was full of mouse poop and kept the resupply anyway—also not shocking.

Valley was eternally positive. Even mosquitoes, more mosquitoes, and still more mosquitoes just couldn't bring him down. I remember hiking with him briefly in the morning after leaving Crater Lake in Oregon. The mosquitoes were bad. Like, really bad. Stop for one second and you were continually swarmed with minuscule, needle-mouthed demons. While the two of us hiked down the trail trying to avoid exanguination, Valley was wearing a hiking skirt—commando—and a head net, you know, because you need protection.

Anyway, we gabbed back and forth while we walked for 15 or 20 minutes until he veered off-trail to take care of Valley Girly business and I careened up the trail, determined to out-run a nebula of bloodsuckers.

Some people thought that Valley had great legs, but it was often said that I actually had the best legs on the PCT in 2017. I humbly acknowledge that this was absolutely true. It was an honor that I never expected to receive, but frankly, it's completely true. I'd like to thank my mom, my dad, and all the people that supported me and... 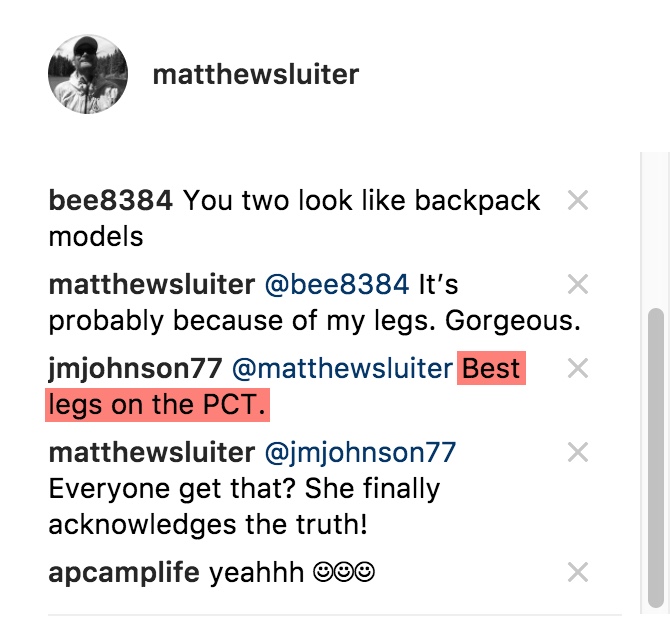 Proof that I had the Best Legs on the PCT.

Ahem. Sorry. This is supposed to be stories about Valley. He had some good legs too, I guess, or at least some people thought so. I don't really pay much attention to that sort of thing.

As of this year, Valley completed the Triple Crown—that's 8,000 miles of trail, folks— and I, of all people, got to hike with him for a small portition of that massive accomplishment. The last time I would see Valley was in the Sierra. Just like me, he had flipped up from Kearsarge Pass to NorCal and planned on coming back in the fall to do his victory lap through the Sierra and complete the PCT. Peanut, Joe Dirt, and I were going NoBo and Valley was Solo SoBo. Just before we passed on trail, I heard him yell out "Thunder Fluff!" in the style of Thunderstruck.

The Story of My People: Part 7: Monster

The Story of My People: Part 9: A-Game