The Story of My People: Part 7: Monster

That night, he showed us pictures and videos of the Sierra from his iPhone. He told us stories about death defying creek crossings, digging down through the snow to find shelter, and how he was probably the first person to walk into — and out of — the Sierra in 2017. Amazing

It was only a day ago that Peanut, Lt. Dan, and I left Sierra City. We were now navigating through snow, blow down, tree wells, and, essentially, long stretches where there was no visible trail at all. If there was trail, it was often a collecting place for snow melt. When the trail disappeared under snow and fallen trees, we just made it up as we went along — and that's a lot harder than it sounds. After miles and miles and miles of route finding, it was starting to become demoralizing.

It was one of those no-trail-in-sight days when I met Monster. We had found a reasonably dry dirt patch in the forest and decided to stop there for lunch. I heard a thump thump thump crunch thump in the direction we had just come from and when I looked up to see what was making all the noise, the guy was already on top of us. "But three seconds ago, he was still over th..." the thought trailed off in my head.

"Hello!" he bellowed with big smile, and then the guy just sat down and started talking to us.

His name was Monster. Uh, yeah, I could have guessed that. This guy was at least 6' 6" or 6' 7" and probably around 220 or 230 pounds of nothing but muscle and chiseled lines. If his size wasn't enough, the commanding German accent just put the entire ludicrous scene over the top. The confusing part was that this guy was kind, pleasant, and sort of funny — in that handicapped way that Germans can be funny.

Monster told us that he was an ex-recon, German special forces soldier. "OK, so he can kill me," I thought. We spoke briefly about trail conditions ahead, and then he got up, and in what seemed like three steps, was out of sight. I was still alive, so I counted that as a win. 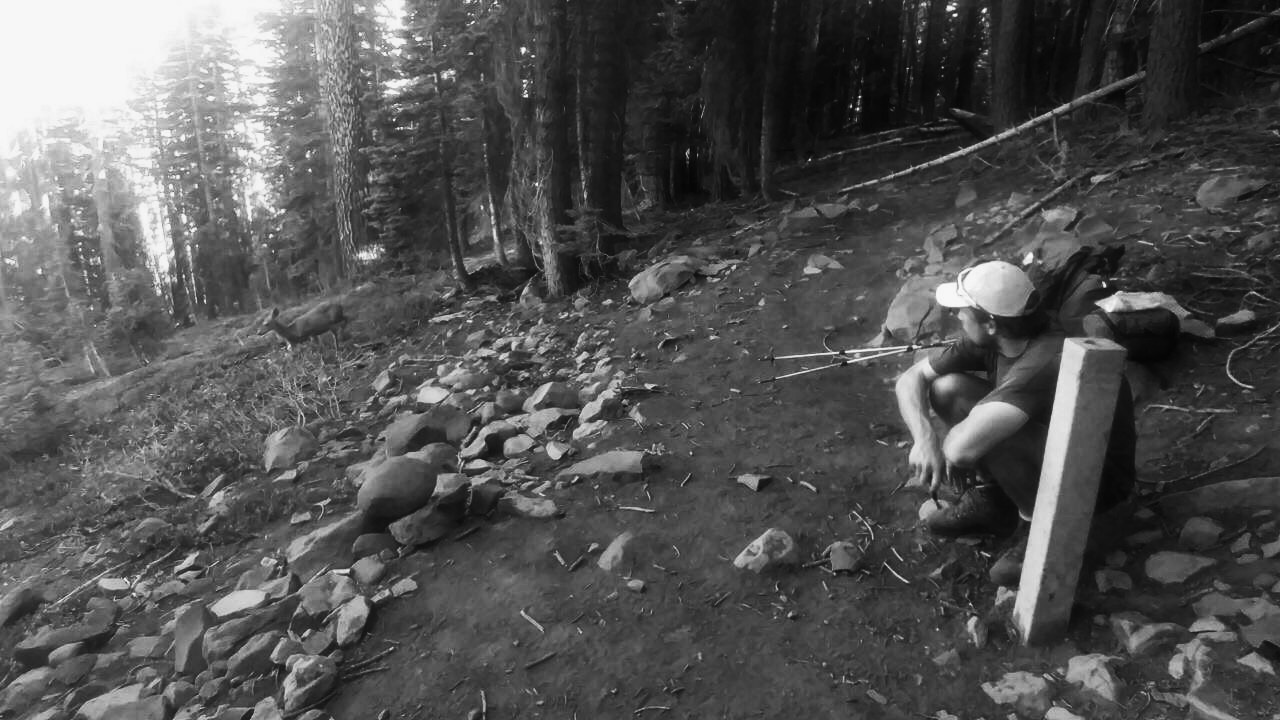 Monster, possibly considering how the deer would taste. Photo by Roi Ben Shoham

We were all headed for Belden, a "town" where we planned on taking a shower, doing laundry, and eating real food. Each one of those tasks would end up being some combination of disappointing, terrifying, or icky. Put it this way: I can now say that I was genuinely afraid of being murdered while doing laundry. Seriously. In retrospect, hanging around Monster in Belden is probably the only thing that kept Peanut and I from being killed by the locals.

It was Belden where Monster latched onto our small, three-person group. Peanut and I were doing laundry and Monster was sitting on the porch of the restaurant/bar, feet up and freshly showered. Since we were all waiting for our clothes to dry and our electronics to charge, the three of us passed the time by making small talk. Peanut, being the braver one, started the conversation and I joined in after I knew it was safe. Monster was apparently the first person to make it straight through the Sierra this year. We had flipped up to Truckee, but he went straight through and he was already in Belden! Monster. Starting to make sense now?

That night, he showed us pictures and videos of the Sierra from his iPhone. He told us stories about death defying creek crossings, digging down through the snow to find shelter, and how he was probably the first person to walk into — and out of — the Sierra in 2017. Amazing. In September, when Peanut and I went back to the Sierra, I couldn't help but recall his photos of Mather Pass buried in snow. I can hardly believe he did it, but I saw the proof.

That's why Peanut, Lt. Dan, and I were perplexed about Monster. Every time he rocketed ahead of us, I just assumed he was gone for good — but each time, we'd find him waiting for us on the trail. He was something of a trail celebrity and we, well, we weren't. 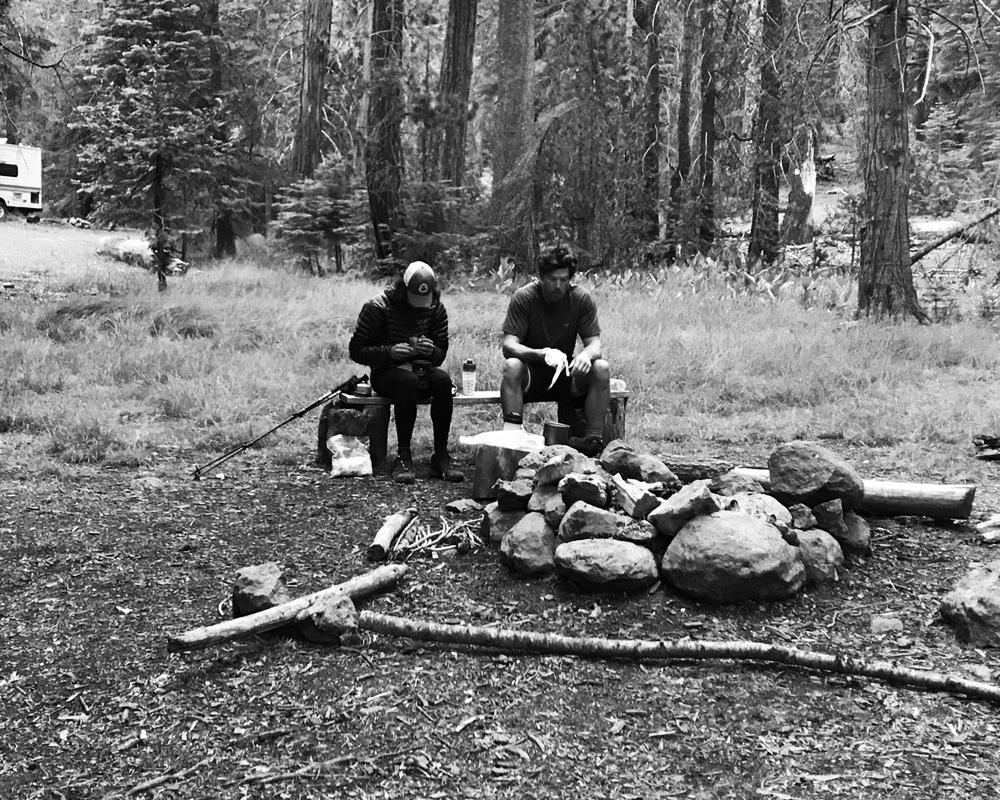 Monster gave me my trail name. Peanut, Monster, and I were taking a break for lunch at some point after leaving Chester, CA. Monster was inspecting my gear and asking me about this or that. When he asked how much my pack weighed, my answer shocked him. His pack was always hovering around 40 or 50 pounds. Mine hovered around 20. 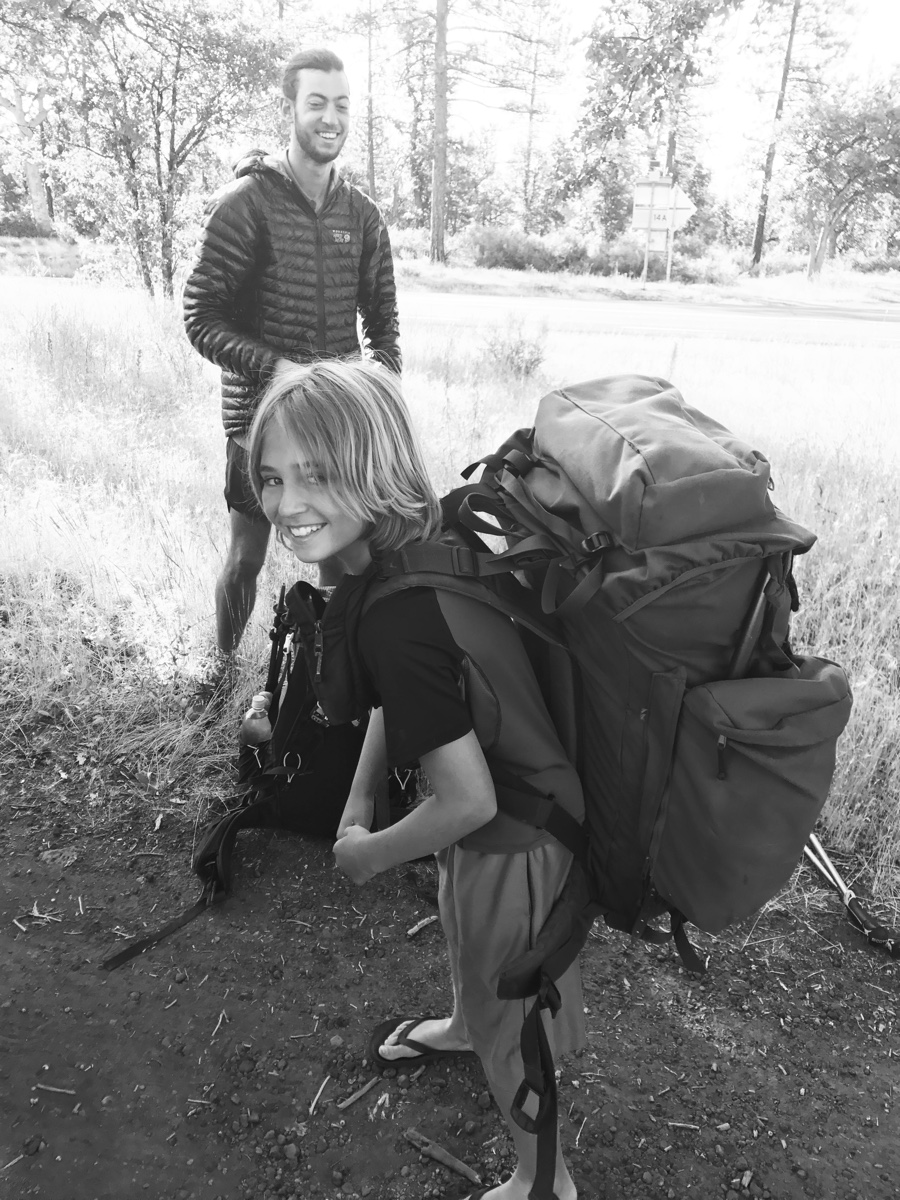 "You Americans and your fluffy gear," he said in his booming German voice. "I will call you Fluffy! Ho ho ho ho ho!" That's how he laughed. Imagine Arnold Schwarzenegger in a Santa Claus suit — that's exactly how it sounded. Peanut agreed that it was good name, but should be left open for addition. Monster immediately added "Beaverhausen." Why? I don't know, but he did the "Ho ho ho!" thing again. German humor.

He tried renaming Peanut to "Mommy" — because he thought she was old enough to be Lt. Dan's mom — but that just pissed Peanut off. I thought it was hilarious, until I tried calling her Mommy once. The murderous glare I got back put a halt to that.

The four of us hiked Hat Creek Rim to Burney Falls, where we all got a hitch into town from a trail angel named Mike. Mike let us stay at his home, do laundry, take showers, and eat a decent meal. The next day, Mike took us into town for a pancake breakfast, and then dropped us off at the trail again. 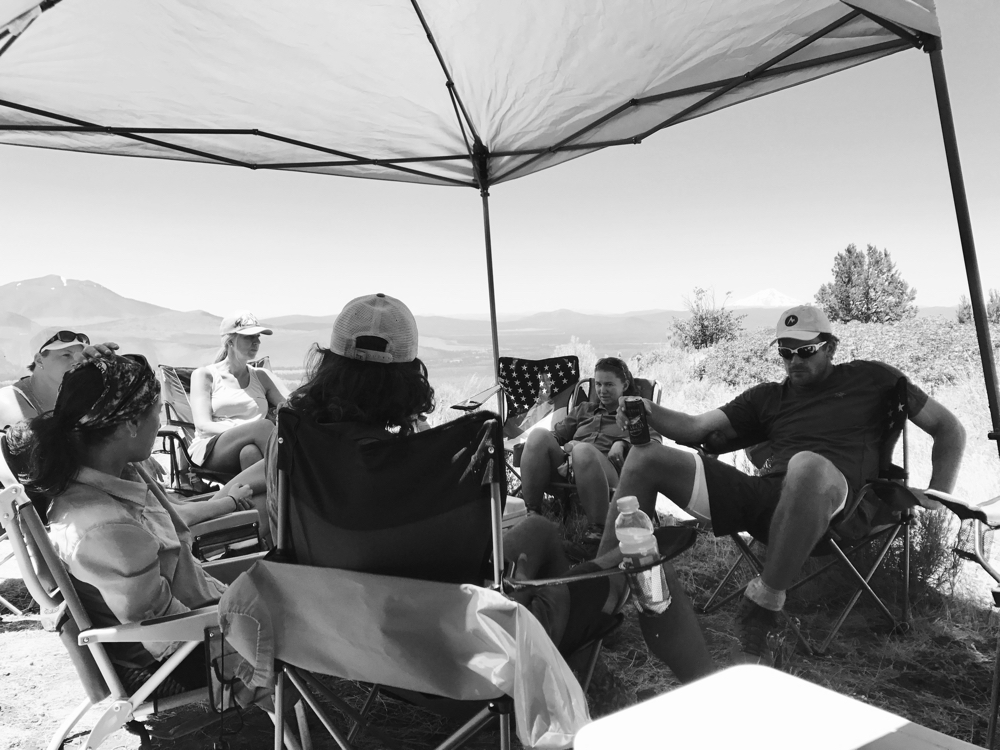 No chair can contain him 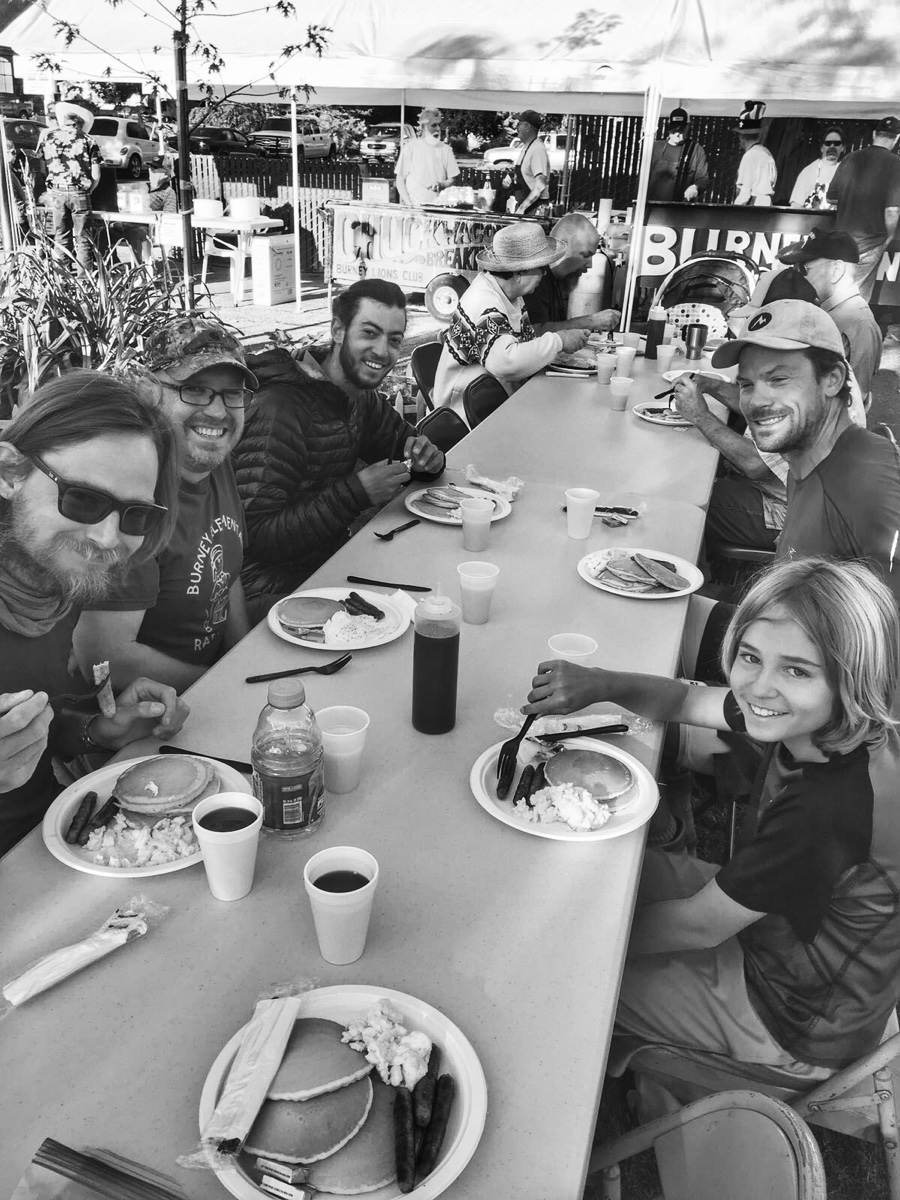 Pancake breakfast put on by the Burney Falls Lions Club 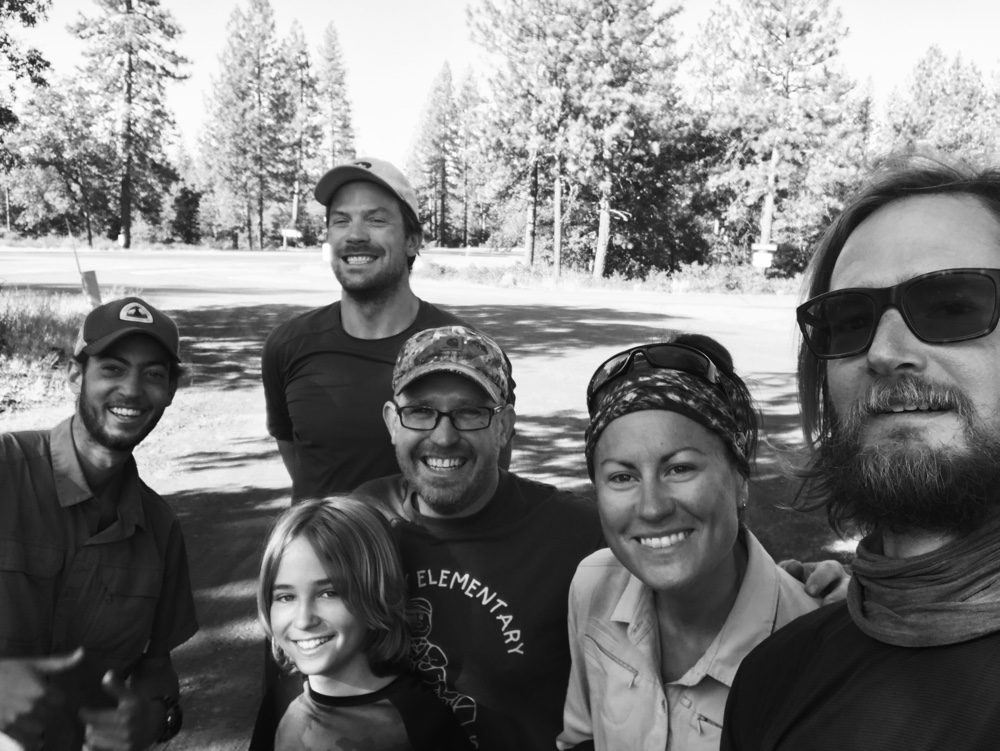 The best smile a German can make

Monster hiked with our small band until shortly after Mt. Shasta. One morning, he got up, quietly had breakfast, packed his things, and walked off down the trail, as he had done for the past few weeks. I didn't know it then, but that would be the last time I camped with Monster. Looking back, I have no idea why he wanted to hike with us. In my mind, we were just average folks, doing average miles. He must find tiny people entertaining, or maybe we looked like a backup meal to him. All I know is that we all enjoyed his company, brief as it was. I think he liked us too.

The last time I saw him was on top of Koosah Mountain in Oregon. I had done 34 miles that day and arrived at the chosen campsite early. To get away from the mosquitoes, I frantically set up my tent, threw everything inside, and jumped in after it. As I was reorganizing the mess, I heard thump thump thump coming up the mountain. "Monster!" I yelled, sight unseen.

"Fluffy?!" came back the accented response. I smiled from ear to ear.