The Story of My People: Part 10: Joe Dirt

We find our protagonists in the middle of an argument concerning the geologial forces surrounding the formation of Mt. Shasta and the Hat Creek Rim.

"How do you know?!" huffs Joe Dirt. He is becoming visibly frustrated with the direction this argument is taking.

"I'm a geologist." responds Lt. Dan, with a hint of arrogance.

"No, you're not!" JD shoots back, raising his voice in protest and stomping his foot in unison with the last word.

Everyone laughs, except Joe Dirt.

The cast is sitting on chairs in a circle under a canopy. They are frantically stuffing their faces with food, except Joe Dirt, who is on his second 20oz beer and in the middle of his comedy routine. A-Game can't finish her beer and decides to give the rest of it to Joe Dirt, who reaches for it gladly. Without skipping a beat, he continues doing impressions of his mother.

"This is the most foul-mouthed, son-of-a-expletive I've ever met." Fluffy thinks to himself. He recognizes the irony in that thought and chuckles quietly to himself.

"It's not how she [his mother] actually sounds, but that's what I hear." blurts Joe Dirt, putting a slow emphasis on the last word and gesturing to his ear.

Everyone joins in all at once, snickering and doing impressions of their own mother in the voice of Estelle Constanza.

It was contagious. Miles down the trail, whenever the rest of us would talk about our own mother, we'd do that impression. That is why I love JD so much. That right there. Smart as he actually was, he was just as funny and always ready to jump right into character at a moment's notice.

At this point, I feel compelled to mention that JD's mom is actually a very nice, very kind lady, and her voice is lovely. Kyle would emphasize this fact many times.

Right from the start, hiking with JD was a riot, in every sense of the word. I'll admit I was a little wary of him at first, but probably because he hadn't been properly vetted by Peanut yet.

Just before Hat Creek Rim, I had developed some pretty bad blisters on my feet from my terrible Brooks shoes, and the heat wasn't helping. Any sort of break was welcome. We came across a scenic overlook with a view of Mt. Shasta and that's where I met Joe Dirt for the first time. You see, Joe Dirt is actually a geologist. That's what caused all the hubbub at the scenic overlook. At this point, I didn't actually know who this feisty ginger was, and honestly, I didn't care—my feet hurt so bad. Bright bursts of blinding pain was the center of my world. Nothing else mattered.

At Crater Lake, a few hundred miles after Hat Creek Rim, JD provides proof that he is, in fact, a geologist.

The next time I saw JD was Burney Mountain Guest Ranch. He was hanging out on the porch at the Guest Ranch with the people from his group, chatting the day away. I remember thinking "Does this guy ever shut up?" Fortunately for me, my group was planning on staying with a trail angel named Mike in Burney Falls. Mike was awesome.

I didn't see JD again until Ashland, OR. I walked to Callahan's Mountain Lodge where I was told they had a great breakfast special for PCT hikers (which I found nowhere on the menu). When I sauntered into the slightly ritzy lobby, I was quickly ushered to the back porch—outside of the building. I don't fault them for wanting me outside. I was dirty, smelly, and sweaty, and everything a rich golfer-type doesn't want to be around. Fair enough.

JD was sitting at a table with a few other hikers, so I pulled up a chair and made small talk. We talked about our plans for Ashland and JD mentioned that he was going to stay the night with his mother's college friend. He then extended that offer to me. I was... well, I was kind of shocked. Joe Dirt was actually a nice guy. A really nice guy. He didn't know me from Adam, but here he was, offering me, Peanut, and Lt. Dan a place to stay. I didn't know what to say. 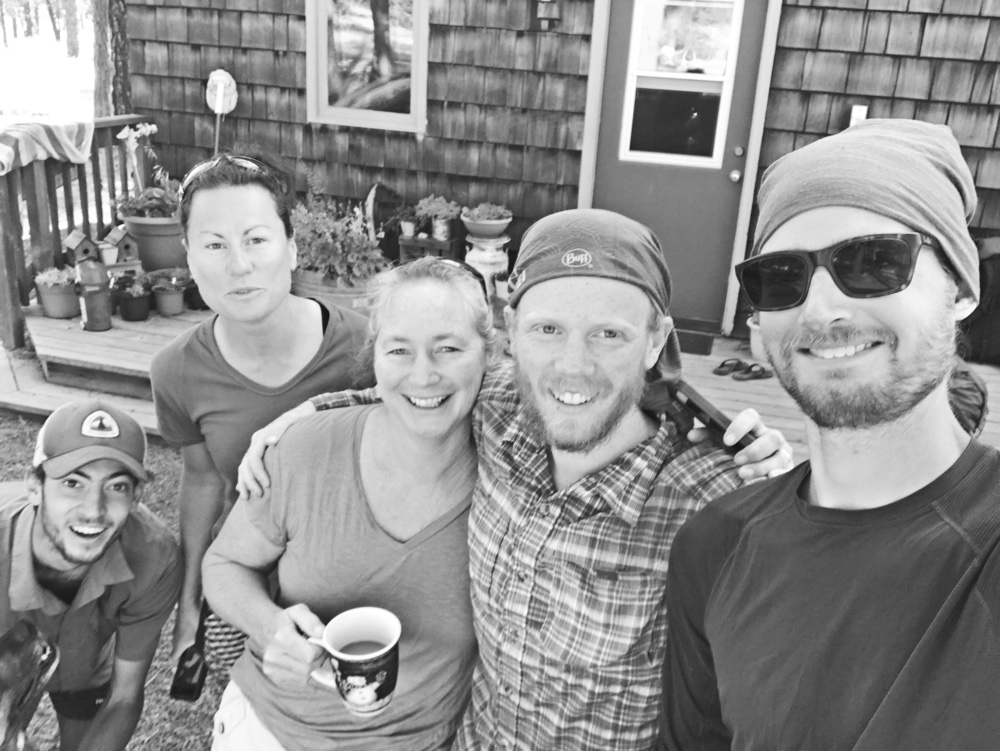 We ended up spending an extra day in Ashland — one last zero before reaching the Promised Land: Bend. Jennifer, the trail angel we were staying with, lent us her car (!) for the day, so we drove in Ashland and just relaxed. That day was awesome. In truth, I knew that JD would enjoy our company while we were in Ashland together, but I fully expected him to join back up with his group once we got back on trail. That never happened. JD, Peanut and I would stick together for the rest of the trail. The rest of the trail! I think back to those few days in Ashland and I would have never guessed that.

A bit of levity to mask a rather cold and wet morning in Washington.

When I was around JD, I would often sit back and marvel at him. He was so funny and confident and sociable and good-natured. I don't know why he wanted to stick around me; I feel I was a bit of a bore in comparison. We ended up hiking to the end together, some 1200+ miles. Not an insignificant amount of miles by any stretch of the imagination. 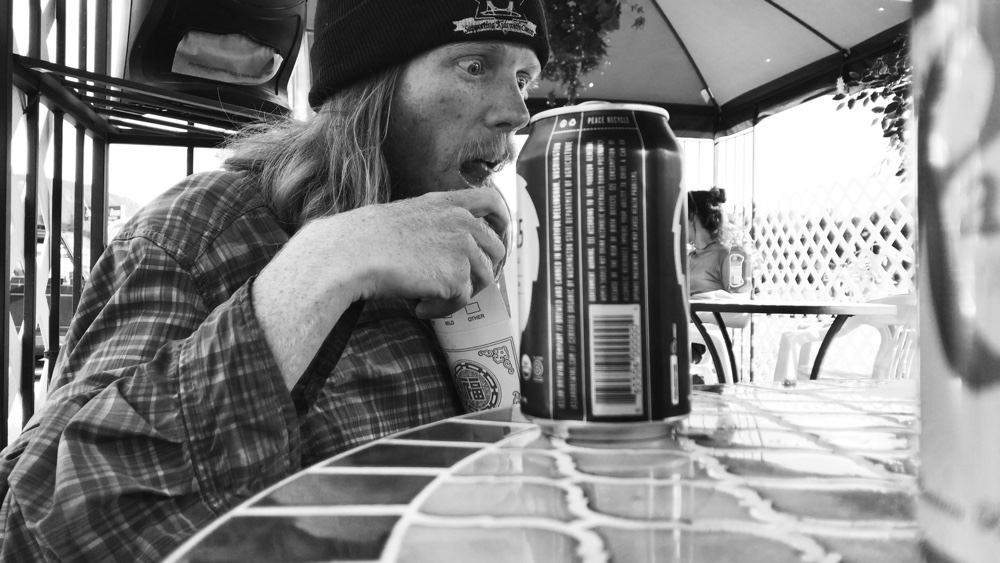 The very moment JD realized he had put too much Ghost Pepper sauce in his curry.

The only person that could keep up with JD's fast-paced, gut-busting humor was Donkey. I could make JD laugh from time to time, but Donkey could put JD in stitches. Seeing JD laugh like that was a sight to see. I'm smiling now just thinking about it. Putting those two together ran the risk of comedic collateral damage, the damage being that everyone within earshot would pee their pants from laughing so hard. 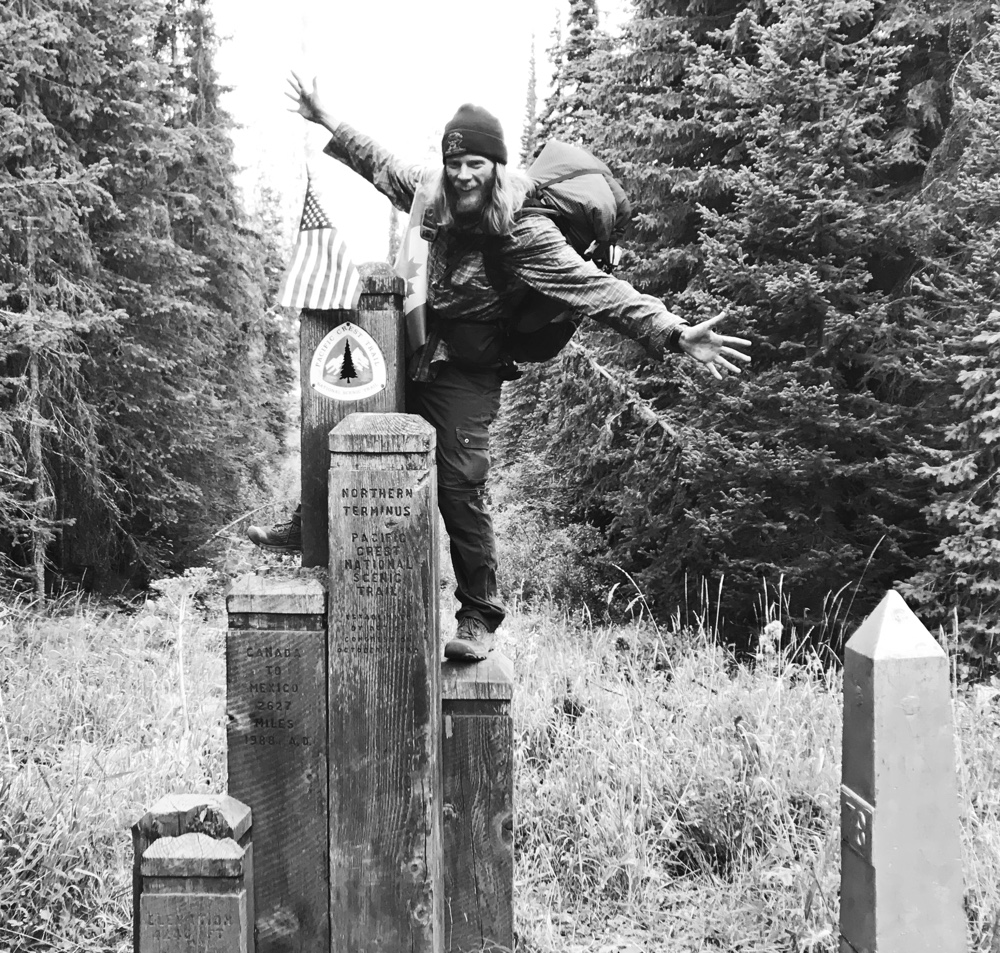 JD's offer to stay with him in Ashland wasn't the last time he would extend such an offer to myself and Peanut. The night before we went over Sonora Pass, we got rained on, then snowed on, then frozen into dirty, smelly, hiker-pops. We did twenty-one miles up and over Sonora Pass and down to Kennedy Meadows North. He got in touch with his sister Mandi, who got in touch with their aunt, who set us all up in her cabin for a night so we could finally warm up and dry out. 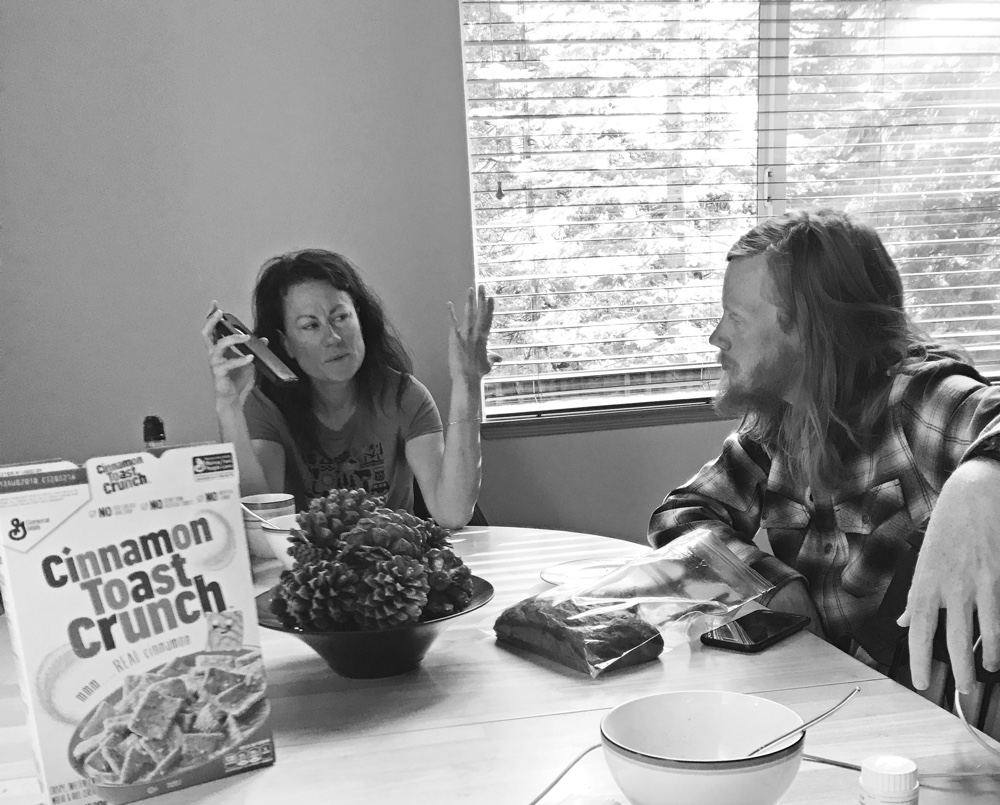 A clean, dry, warm, and brief moment of civilzation. 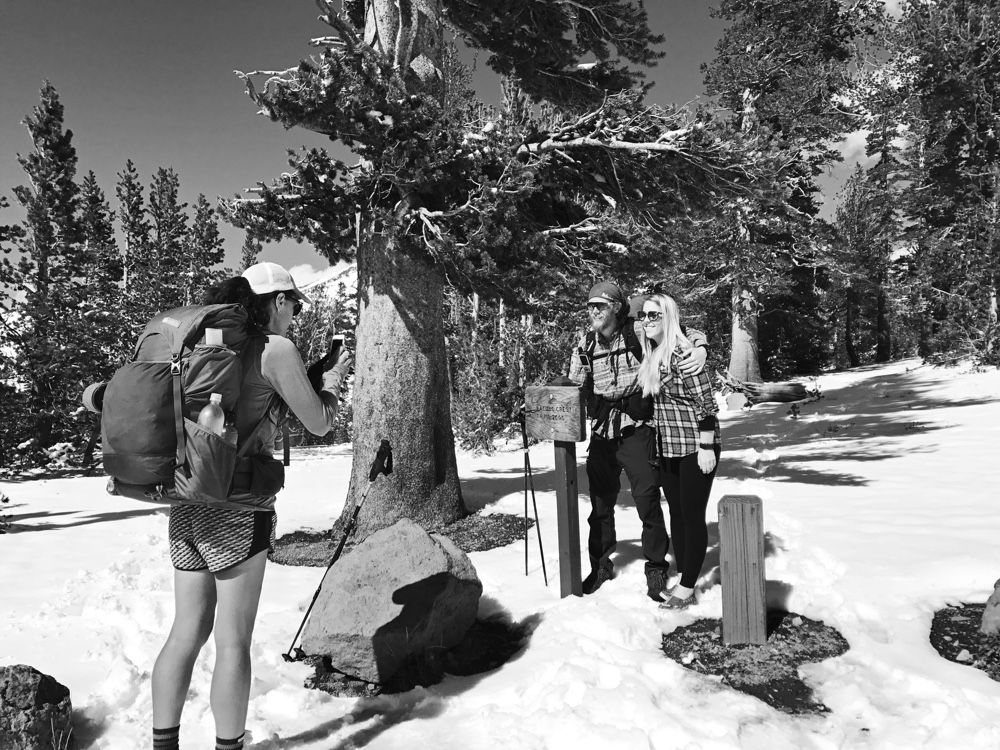 Leaving Sonora Pass, warm and dry (but not for long).

JD also let us catch a ride with him and his uncle Val (best guy ever) back down to Longview/Kelso, WA from the Canadian border. Val had driven up from the Bay area in California to give his nephew a ride back across the border. He knew there would be a gang of us arriving with JD, but he was ready for us. 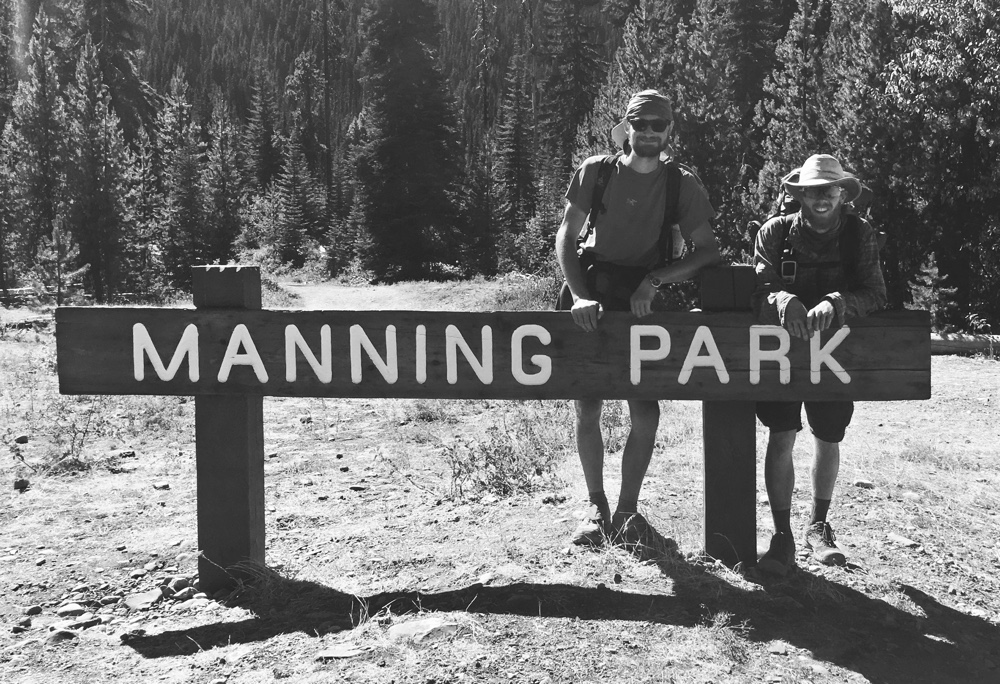 When JD trampled down the last bit of dusty dirt road to the Manning Park sign, Val was there with Gilby, his dog, and beer. Cold beer. Lovely, cold, delicious beer. The type of beer that...ahem. Sorry. It was really good beer. Moving on. Val was a good sport and we (Peanut, JD, Donkey, Pollywog, A-Game, me, and Gilby) all piled into the van and Val drove us to Manning Park Resort, where Peanut's boyfriend Tim had rented a room. We stayed one night and the following morning, Val shuttled us across the border and down to the Longview/Kelso area, about 45 minutes north of Portland, where Tim was waiting for us. 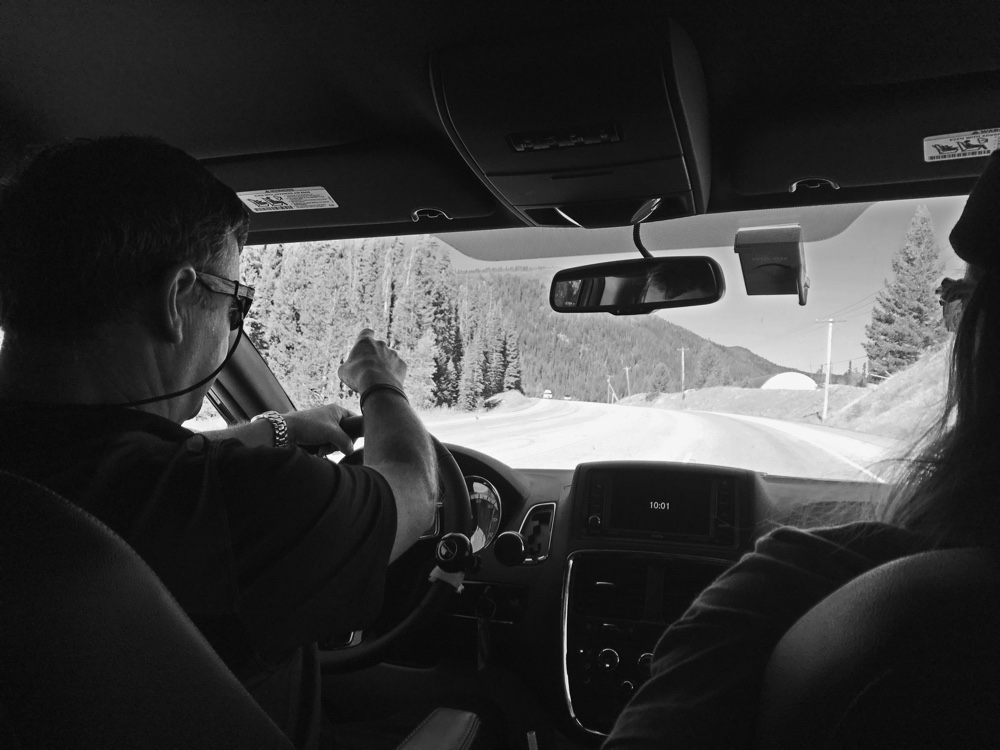 Uncle Val drives us back to the United States.

If you haven't noticed already, JD's family came through for us so many times. Giving us a ride to here, or a place to stay there, or a party at the end. You can walk the trail without this level of assistance, but it's waaaaay better with it. I can't thank any of these people enough, and I know the others feel the same way. 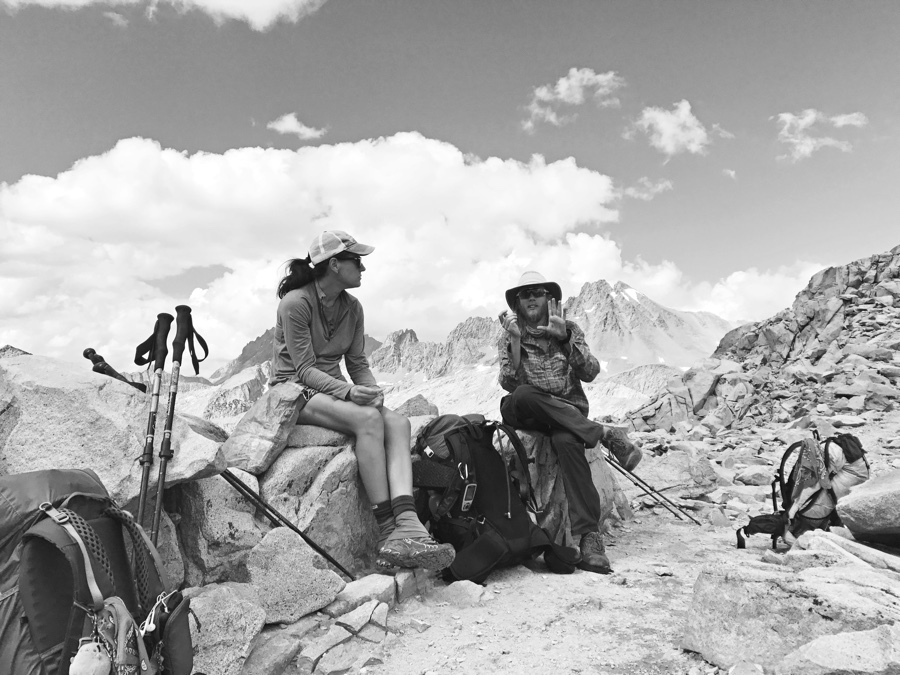 JD explains something astonishing to Peanut, who's flabber is completely ghasted.

JD was out there for the wilderness. He was usually ahead of me on trail, and when I would catch up with him, he was often at a scenic location—just sitting there filtering water and staring out into the distance. "Oh hey man! Isn't this a sweet view?" he'd say when I finally caught up with him.

"Sure, it's great" I'd wheeze out, leaning over my trekking poles and completely out of breath. "Great." Wheeeeeeze. 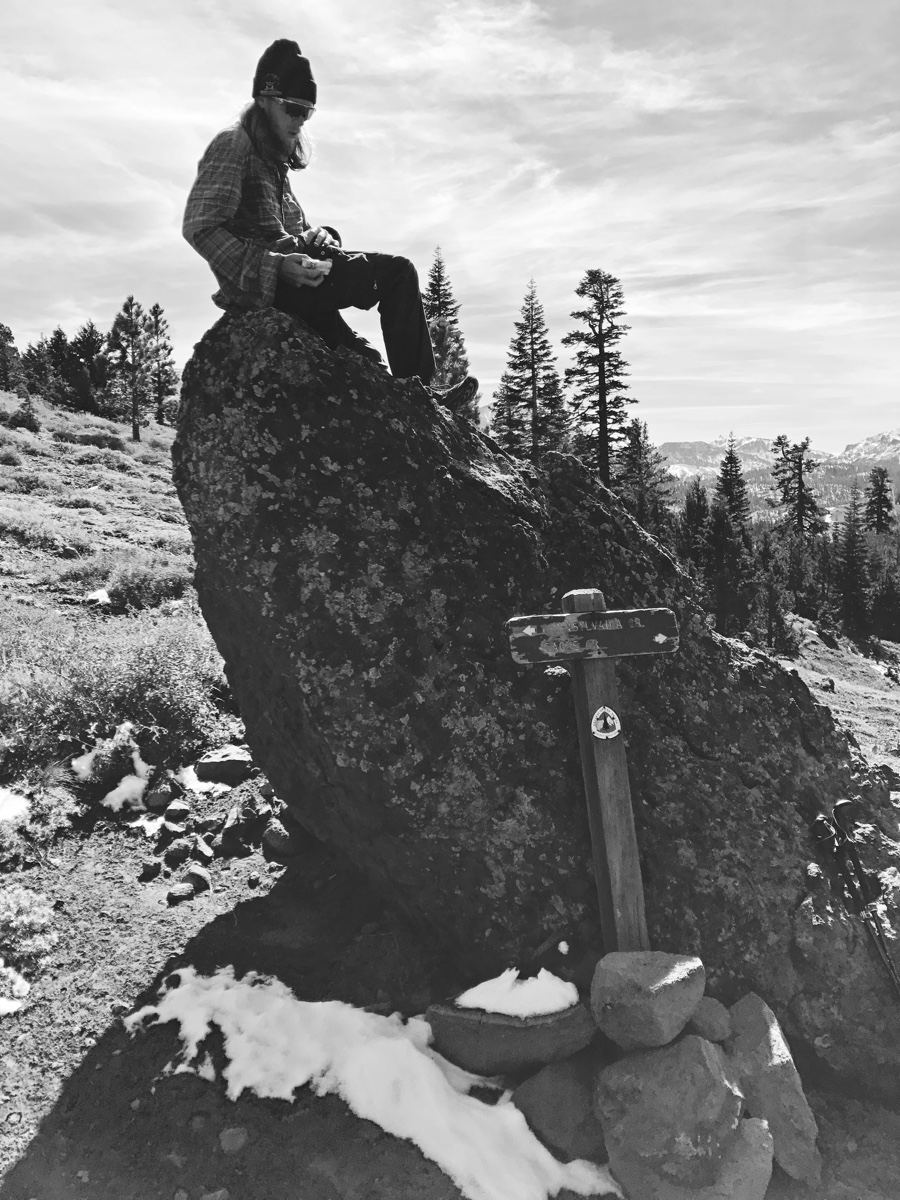 Hiking with JD was easy, even though I was 14 years his elder. No drama, no expectations, no boring moments. He was self-reliant to the point that he could choose to be with people or not. I never worried about him or his ability, and because of that, I'd hike any trail with him (CDT in 2019? Come on! Let's do it!). 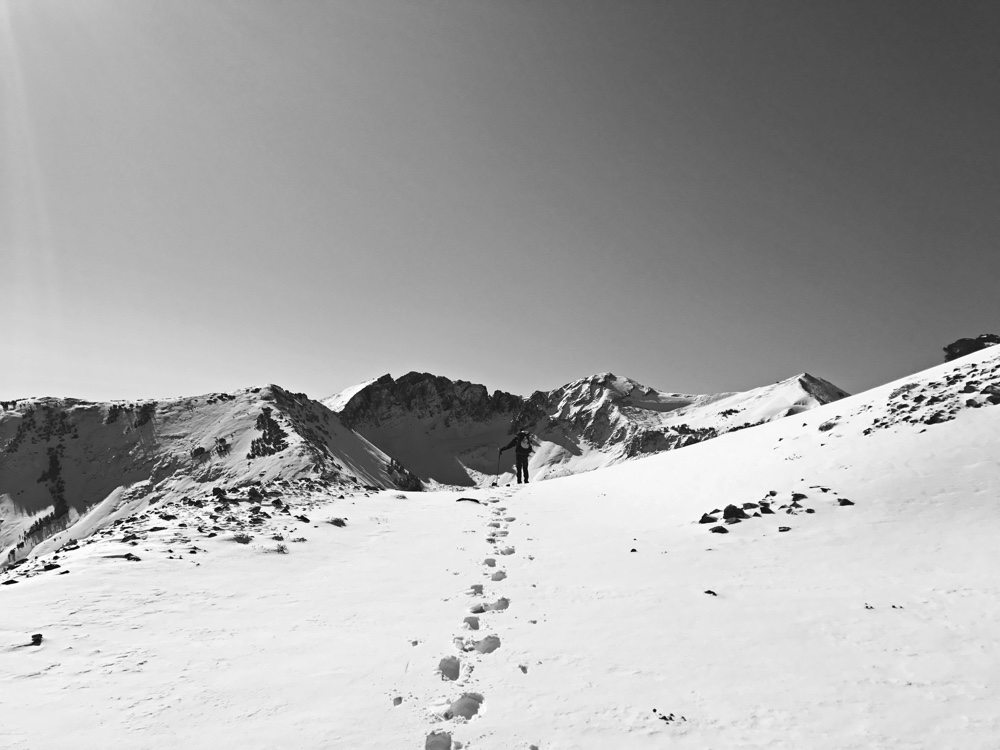 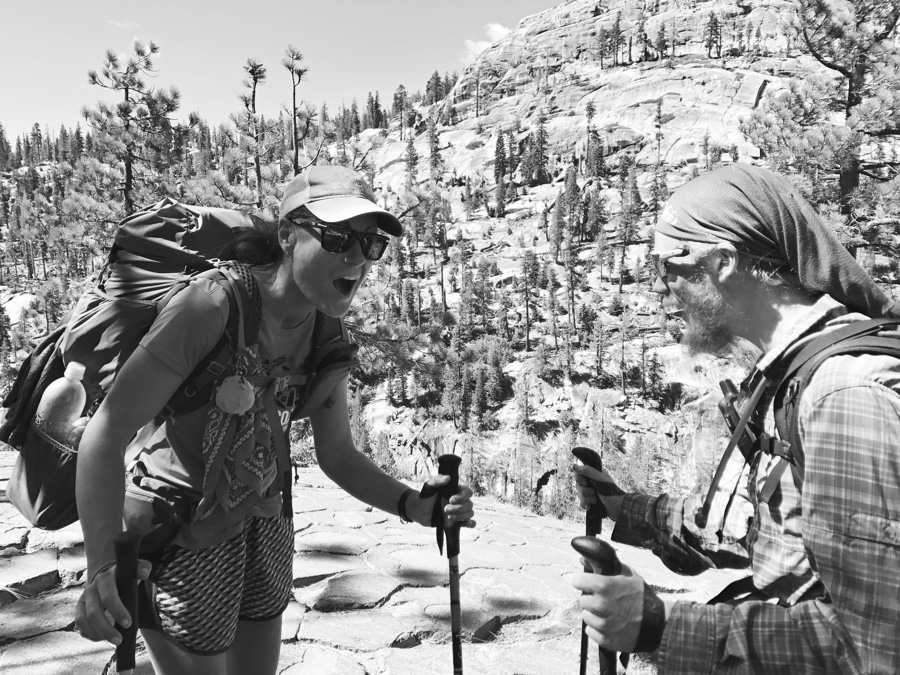 Peanut explains something amazing to JD, who is astounded.

From nearly getting struck by lightning near the base of Mt. Adams, to getting eaten alive by mosquitoes in Oregon, to looking out over Marie Lake, to joking around with Peanut at the top of Mather Pass, there was never a dull moment with JD. He was hilarious, but he also had a quiet peace in him when the moment or place required it. We were all pretty quiet at the top of Silver Pass, but that was OK. It felt right. 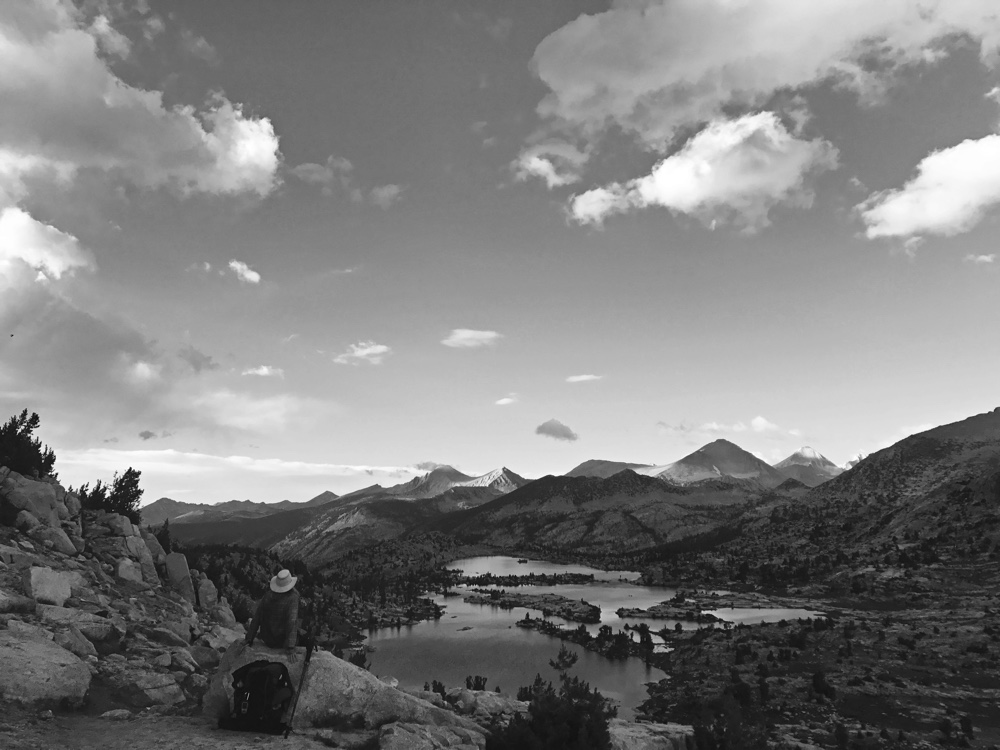 JD ponders the beauty of the moment while looking out over Marie Lake. 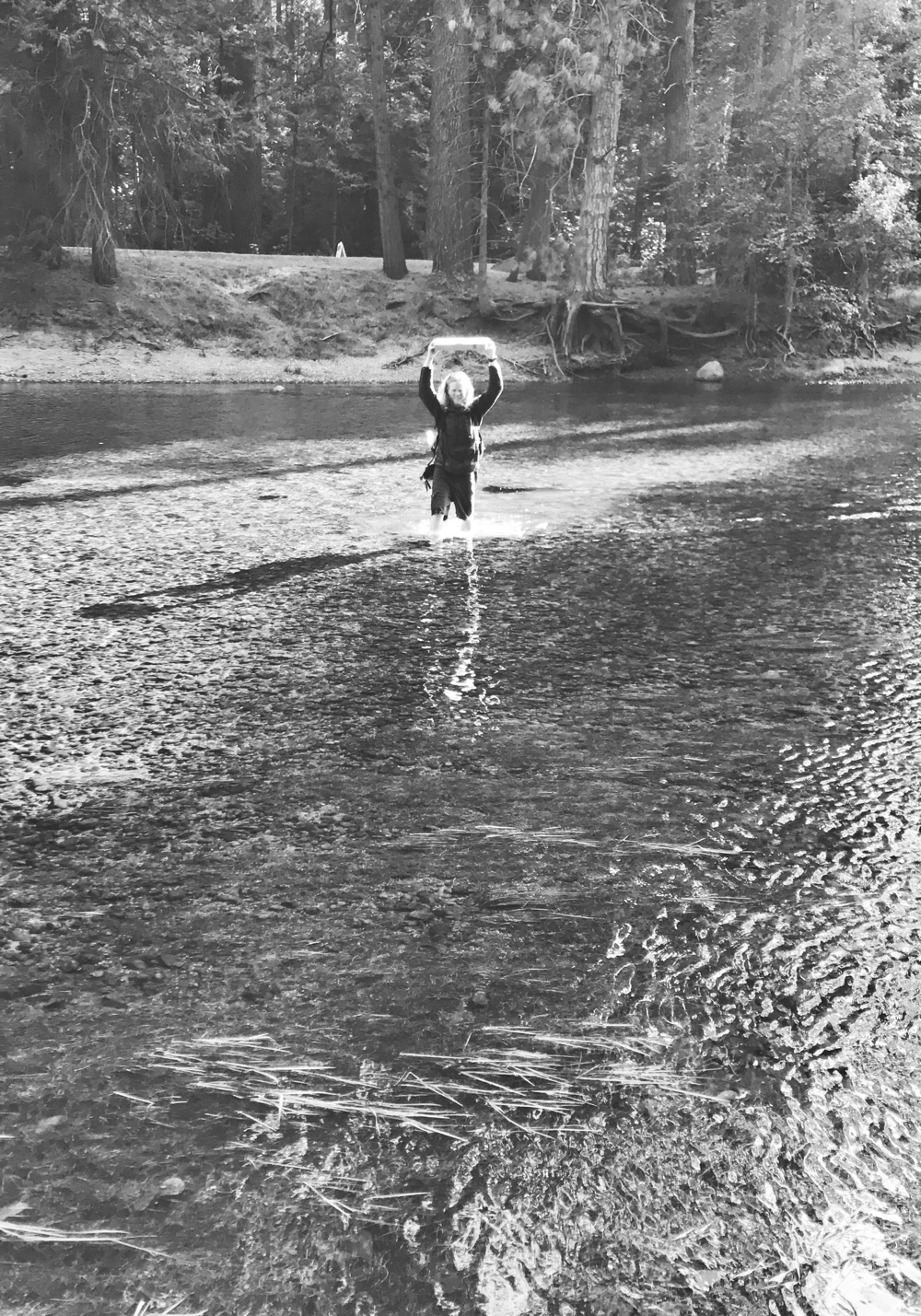 In a panic to catch the last bus out of Yosemite Valley, this was JD's greatest moment on the PCT: fording the Merced in the most populated area of Yosemite National Park with a pizza box held high. Only a thru-hiker would consider this a viable route.

JD also had a habit of ruining what could have been my greatest videos or photos. Why does everyone do that to me?! (I'm looking at you, Peanut, Katie, and Conner!) 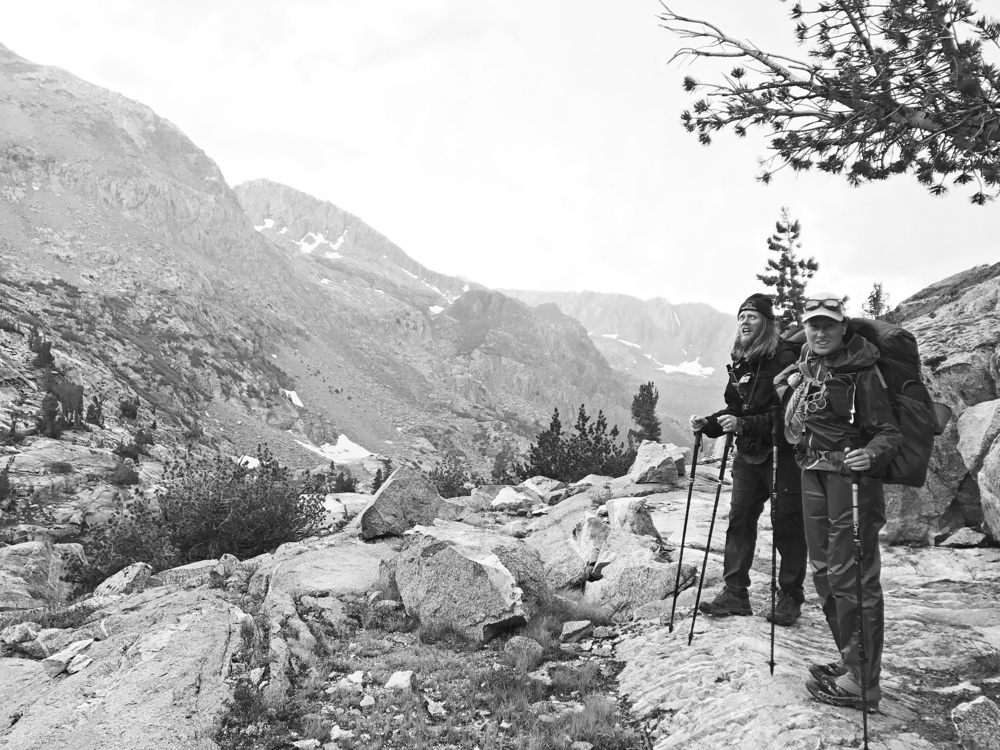 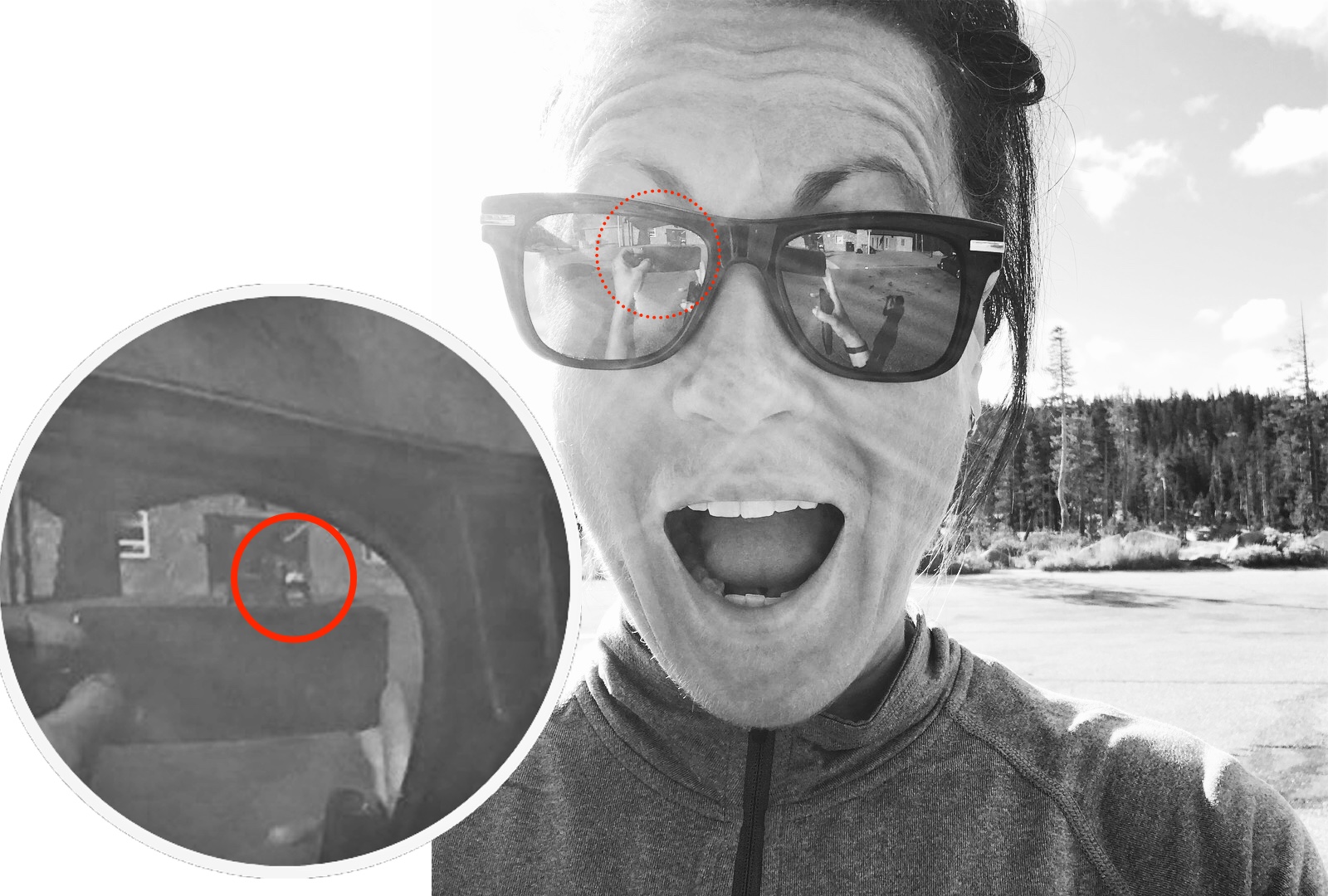 JD attempts to photo-bomb my finish photo by mooning the camera. Thankfully, Peanut was busy taking photos of herself (and not me) at the moment. Thanks guys, I think.

Call of the Wild!

JD led the way, as usual, and we walked toward the Rest Area at I-80. I let him get a little way ahead of me and then let the tears out. Paradoxically, I was happy to be done with the trail, but I didn't want to leave. As I walked, I listened to some wistful songs, then sad songs, then tried some happy songs, but cut them off after the first beat and went back to the sad songs. Then on accident, my phone shuffled onto "The Long Road" by Pearl Jam—it was perfect. I thought about my love for the trail, the love for my friends, the love for my family, and my heart spun from one to the other, confused about whom I wished for the most. In the end, I went home to my family, but The Trail followed me this time. It's something I just can't seem to shake.

"I have wished for so long. How I wish for you today." Goodbye #PCT. I'll miss you. #thelongroad #PacificCrestTrail #TheEnd https://youtu.be/Fotr4fPrBhI

JD's journey would end in Sierra City, about 40 miles North of the Rest Area. For the first time in more than 1200 miles, he would walk alone. I felt sad about that and couldn't imagine having to walk the trail without knowing my friends were close behind. JD finished strong at a mini-monument his father built for him, along with a beer and a burrito. 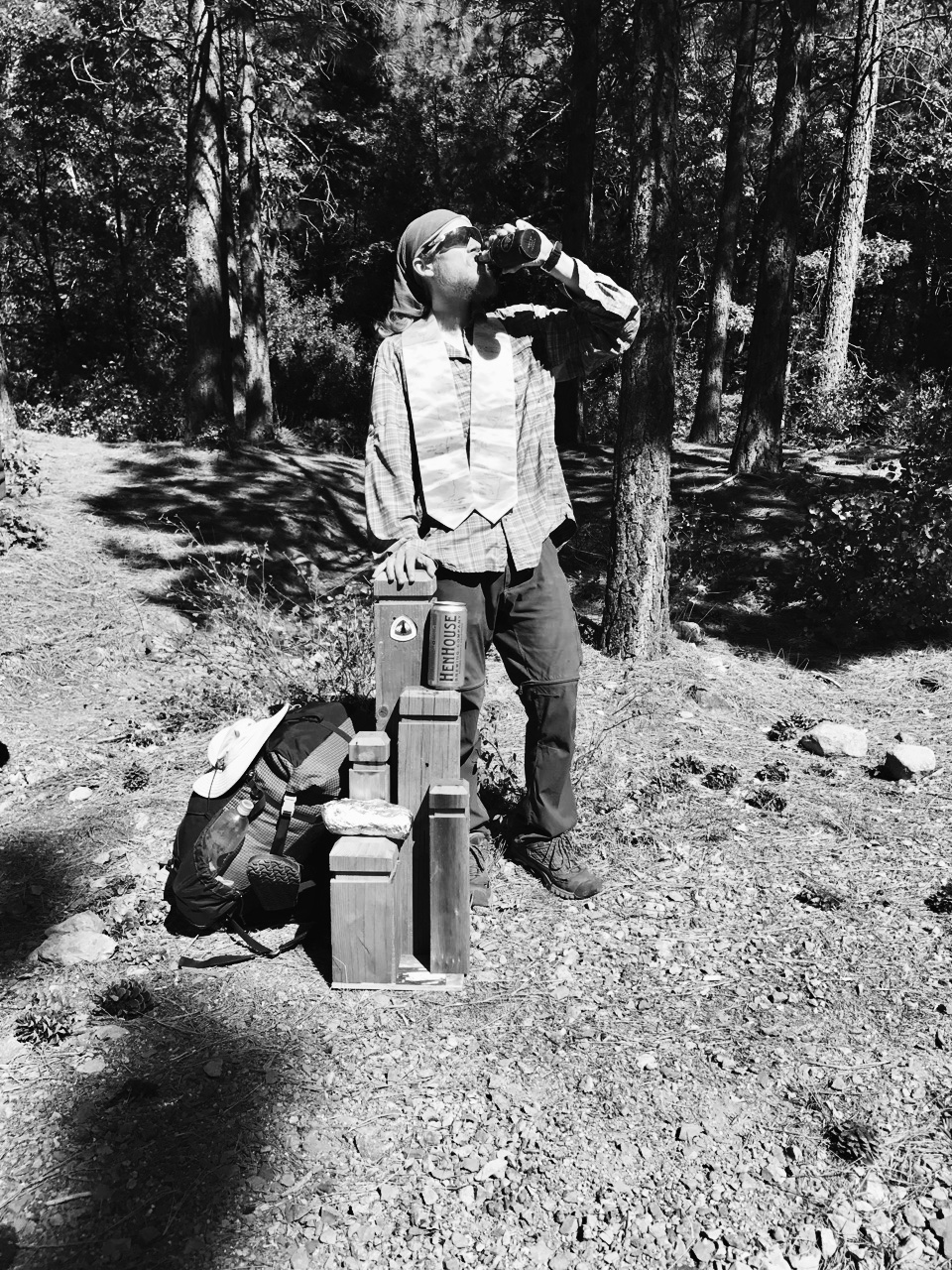 What is Old is New... Again