No, Donkey and the Wog is not the title of a cliché buddy-cop TV show, but it should be—and the lead roles should be filled by Matt and Sarah,

No, Donkey and the Wog is not the title of a cliché buddy-cop TV show, but it should be—and the lead roles should be filled by Matt and Sarah, also known as Donkey and Pollywog.

I'm not very outgoing. Like, at all. The prospect of meeting new people makes me anxious. For most of the trail, I only hung out with people that Peanut liked. As we neared the California/Oregon border, I thought I had zero interest in making more friends on trail (I had two friends already, which was enough for me). My memory is a little hazy, but I'm pretty sure the first time I saw Donkey and the Wog was at the Hiker Hut in Etna, CA. They were sitting on the couch inside the hut listening to Caveman pontificate about, well, whatever Caveman wanted to pontificate about (which was everything). The only thing I remember vividly was Donkey's bright, lime-green "KEY WEST" trucker cap and that both Donkey and the Wog were dressed in blue, head to toe. "Weird," I remember thinking to myself.

The next time I came across Donkey and the Wog was the night I left Etna. Peanut, Lt. Dan, and I left in the afternoon and had settled on hiking only seven miles that night. It was already dark when we arrived at camp, which was on an exposed ridge with a sprawling view of the sky. There was a tent already setup there, but I didn't recognize it (I found out later that it was Donkey and Pollywog). That night, as I was setting up to cowboy camp, I spilled clouds of chocolate-flavored protein powder all over the ground—right where I was sleeping—transforming this peaceful campsite into a mouse-magnet, and quite possibly, all of us into bear bait. Donkey and the Wog were tucked away inside their tent already and likely had no idea how much danger I put them in that night. I don't think I ever told them. Sorry? 😕 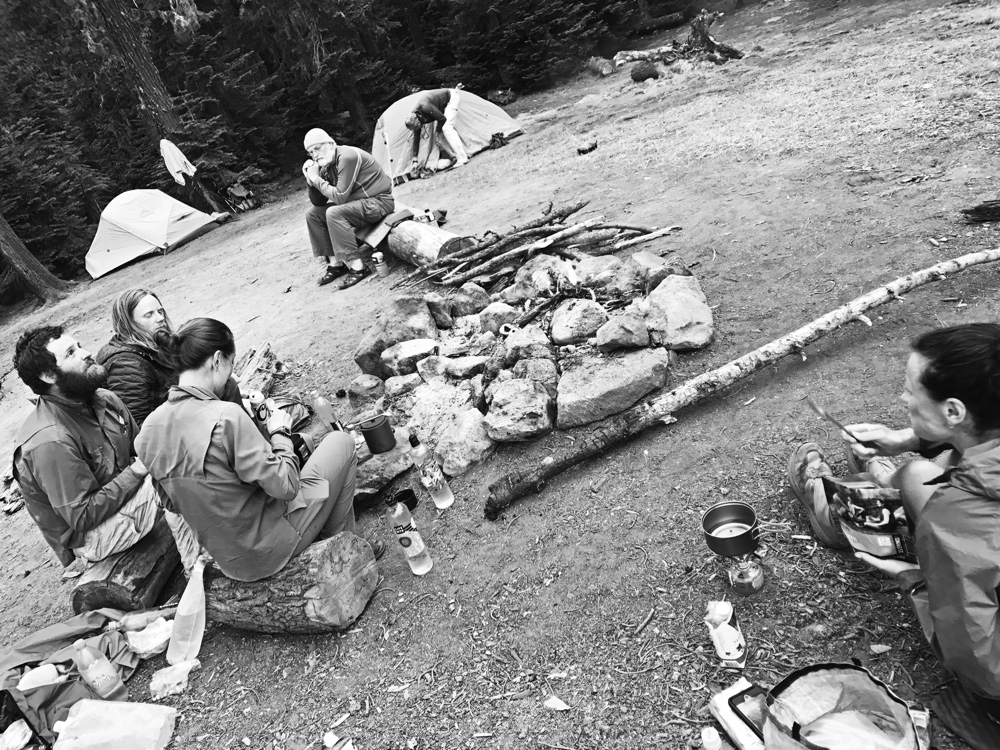 We played trail leap-frog for a few hundred miles after Etna and I gradually got to know them better each time we crossed paths. We knew all the same people on trail at this point and that made getting to know Donkey and Pollywog that much easier. 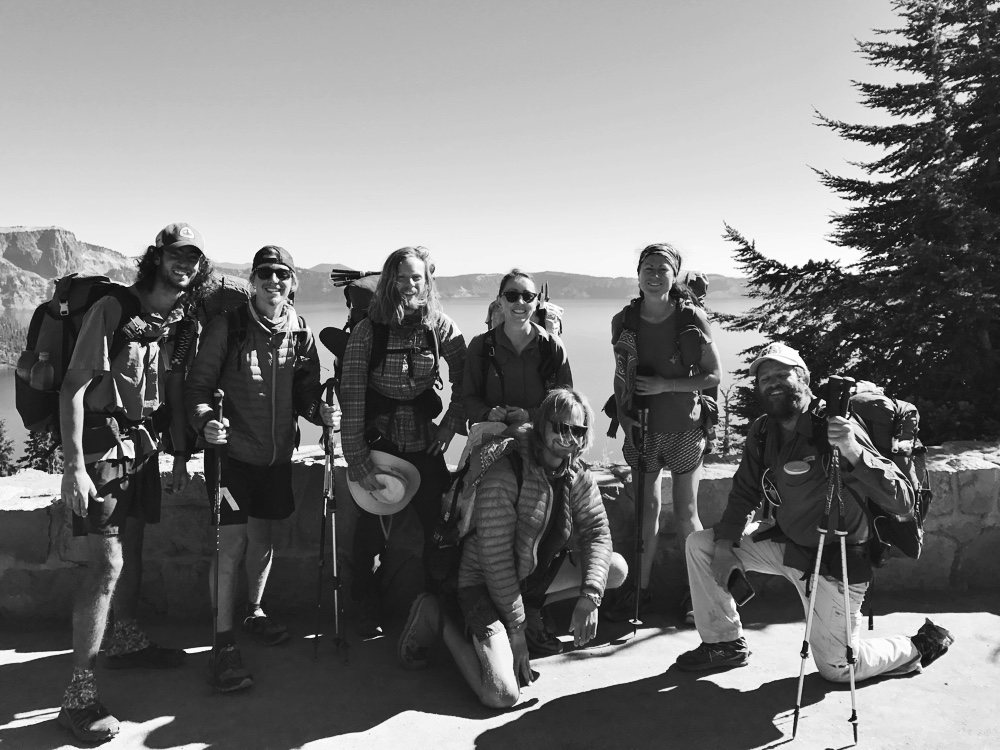 Apparently, Donkey and the Wog had been leaving inspirational messages on the trail for a guy named Scoops, who was known for being a bit of a downer. Positivity from others had a negative effect on Scoops. I got the sense the he just despised happiness in general. Knowing this, Donkey suggested that we continue to leave inspirational messages of hope and happiness for Scoops. "This is really gonna get Scoops upset!" said Donkey, as Peanut awkwardly sculpted a snow angel on the side of a mountain.

Positivity as a weapon. Only Donkey and Pollywog would think of that.

The day we hiked out from Crater Lake, Peanut, Donkey, Pollywog, and I stopped for a breather and a snack at a touristy scenic overlook. There were crowds of townies there, gawking at the lake and snapping selfies. We were watching them when I heard a beeping and vibrating coming from inside Donkey's pack. Somehow, his Spot geolocator had been triggered and it had sent out an SOS signal requesting emergency assistance. I remember him pushing buttons on the thing until it finally stopped. The comedy of it was that we were surrounded by hundreds of people, but had requested to be choppered out to safety. I'm not exactly sure what happened after that—we kinda just got up and walked off into the wildnerness. I'm now imagining a Medevac helicopter descending into a panicked scrum of tourists. The SAR team in red jumpsuits leaps out, and... there is no one to rescue. There is only a crowd of people taking pictures and selfies of the rescue team. I hope that didn't happen. I guess we'll never know.

After leaving Crater Lake, our PCT power group was gradually whittled down to Peanut, Joe Dirt, and myself. To mix things up a bit, Peanut had decided that she wanted to catch up with Donkey and the Wog, with the intention of hiking with them to Canadian border. "They're just so much fun!" she said. However, each time we caught up with them, they'd leave the trail for some R&R at a posh this or rizty that, while the rest of us slummed it at hostels or whatever else we could find. We'd see each other from time to time in towns along the way, but rarely hiked together. That's the way it was from Crater Lake, Oregon to Snoqualmie, WA. At Snoqualmie, we set out for the border as a group again. The band was back together! 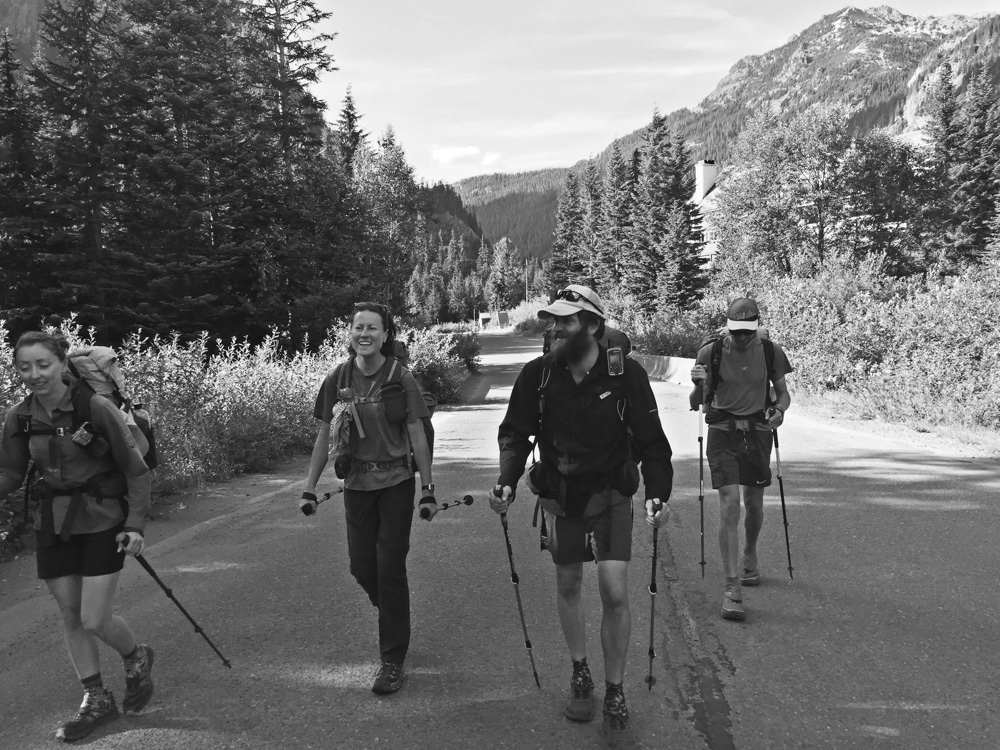 I got them to mime hula-hooping while hitchhiking. It didn't work any better than regular hitchhiking.

Donkey and Joe Dirt were the comedians in our group. Between those two, there was never a dull moment. There was at least one occasion in the Glacier Peak Wilderness where Donkey was on such a roll that he nearly made Peanut pee her pants. Seriously, she was laughing so hard that she had to stop and let Donkey and the rest of us pass her by. Anyone laughing that hard is definitely running the risk of peeing their pants. 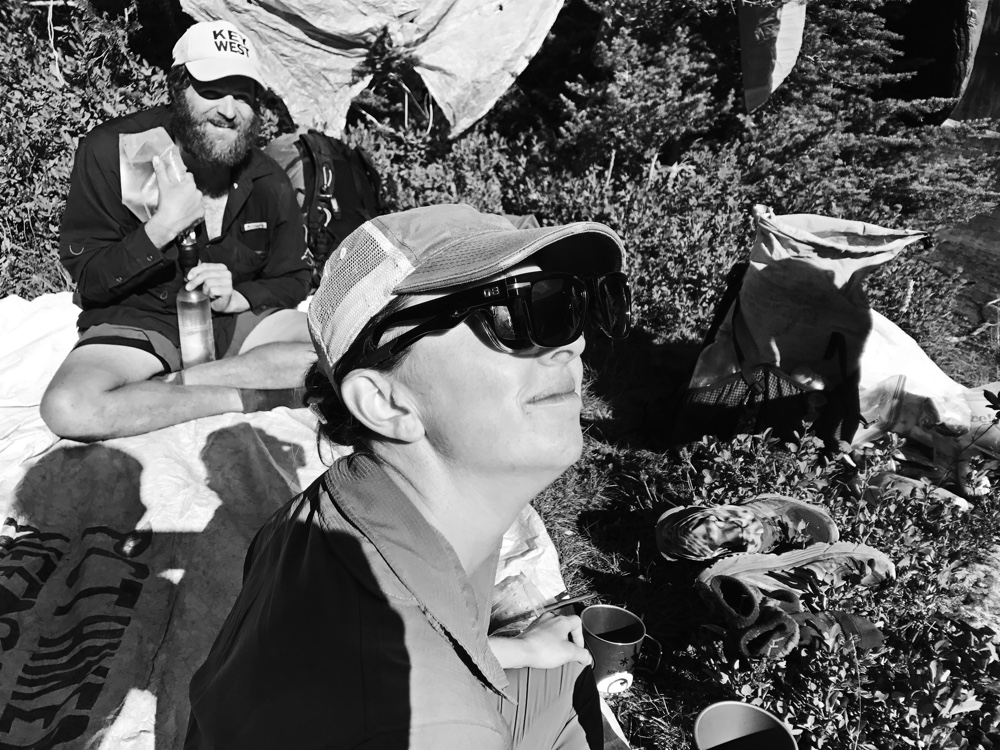 The thing is, Donkey and Pollywog had a wonderful bonding effect on the people around them. They always had something to talk about, and it was always funny or interesting. The two were full of one-liners that left everyone in stiches, which led to a bunch of inside jokes that no one but us would get.

Not one of those phrases are funny when spoken outside of our little group, but to us, they were loaded with comedy gold. Gold, I tell you. Speaking one of them aloud was akin to casting a laughing spell that would drop everyone to the ground, holding their tummy and rolling with laughter. Gosh... so many stories and so little time to re-tell them all.

I remember hiking behind Pollywog for a while one day. She was constantly reaching out to the bushes on either side of her, grabbing handfuls of wild huckleberries and blueberries. Meanwhile, Donkey was talking about high school sports for some reason. I remember her fingers being stained a deep purple, along with her lips, teeth, and tongue. She called the good ones "Plumpers", according to Donkey. Its funny how the trail can bring out the kid in anyone. It wasn't long before I was doing the same. 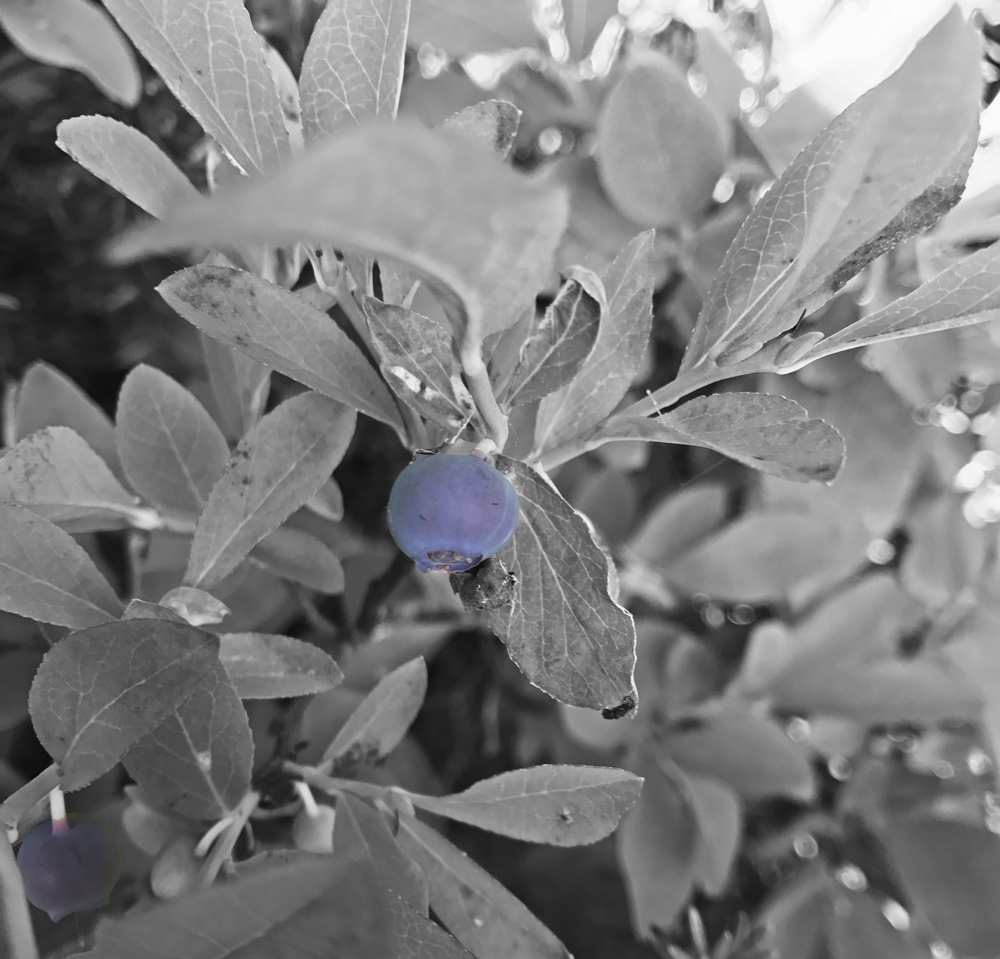 As funny as Donkey and Pollywog were, I initially felt like second fiddle to them. I like to think that I can be funny on occasion, but I simply could not keep up with them—that is, until one night at Mica Lake where I confounded them into a self-reinforcing, reimagining of reality. Donkey would nearly lose his mind trying to find a logical way out of my reinterpretation of the world. We were sitting on the ground making dinner when I asked everyone what their greatest fear was. We went around the circle, with everyone chiming in. The usual things came up: death, failure, etc. When it got to me, I said I was afraid that I was mentally handicapped, but no one had ever told me. Donkey was astonished. I remember him tilting his head, mouth open, and confused as I explained that I could be blathering like an idiot to them right now, and I wouldn't be aware of it. I might think I'm hiking the PCT, but I'm really in the backyard, filthy, eating bugs, and "cooking" mud.

Donkey's first impression of my fear was that I was bonkers, but the idea began to eat at him. Eventually, he was thinking "Maybe that's me too. Oh my gosh—maybe that's everyone in the group!" Watching his downward spiral into this maddening abyss was hilarious to witness. He began to reinterpret his (and everyone else's) past mistakes—mis-identifying people, losing something, getting confused, his collection of knives, forgetting the name of the last town he was in—as evidence that he too (and the rest of us) was mentally handicapped and no one had told him either. He gradually developed a coping mechanism for his new existential crisis: he assumed that this elaborate hoax was actually a TV show called "Ups and Downs" and we were the unwitting stars of the show—but that only led him deeper into this alternate reality.

I wonder if Donkey is still dealing with this vexing re-imagining of the world around him. I hope he is. 😜

Anyhow, Peanut, Joe Dirt, A-Game, Donkey, Pollywog, and I walked together to the border. The morning we arrived at the Monument at the Northern Terminus of the PCT, I had left early, leaving everyone else behind at camp. That meant that I got to witness—and record—everyone arriving at the Monument.

Joe Dirt arrived second, but Peanut, Donkey, and Pollwog were curiously nowhere in sight. Listing closely, I could hear them a little way up the trail, discussing... music? They were casually scrolling through Pollywog's phone to find an appropriate theme song to play as they marched up to the Monument. I assumed it would probably be something epic or something completely inappropriate. Pollywog decided on something completely inappropriate: she went with Like a Virgin by Madonna.

According to Pollywog, it's relevant because it says "wilderness". That's it. The rest is 80's pop nonsense.

Minutes later Pollywog would subject A-Game's arrival at the Monument to the same theme song. A-Game seemed to dig it, though.

Donkey and Pollywog ended their PCT journey at the border, with Donkey trying to convince Pollywog to go back and finish the Sierra section. At the time, she would hear none of it. She was done walking and there was also the fact that they had won a permit lottery to raft the Grand Canyon—a chance of a lifetime and they had only a week to get from Canada down to Arizona. The Sierra would have to wait. Hopefully they make it back to PCT—the Sierra section was a real stunner. 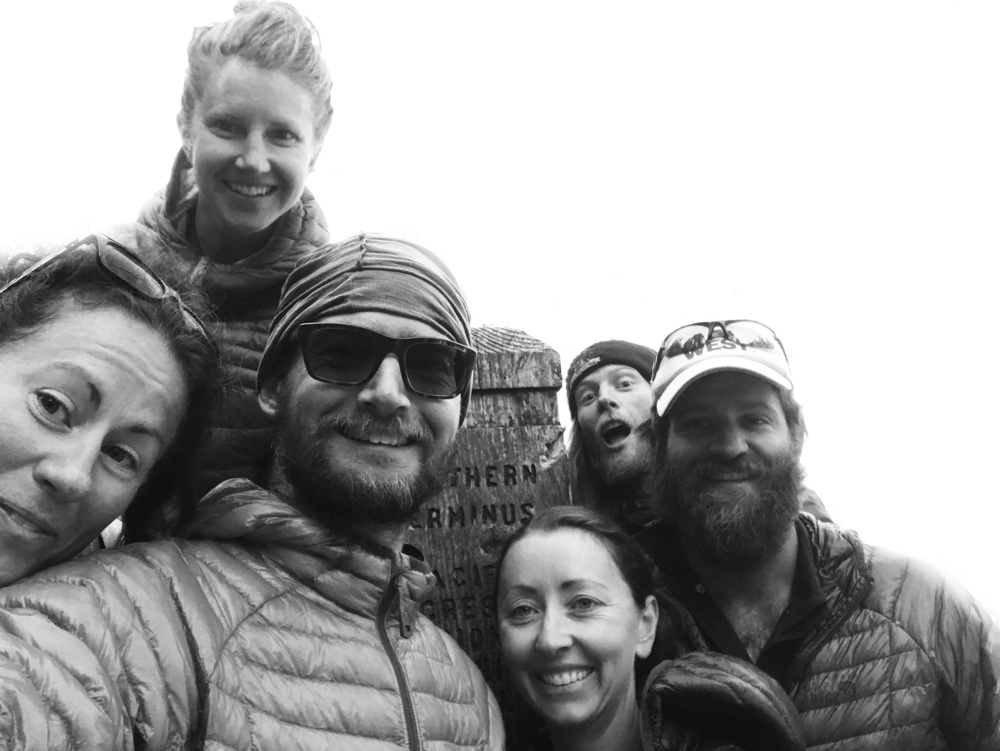 I didn't get to hike with Donkey and the Wog for very long—maybe a few hundred miles—but I loved every second of it.

What is Old is New... Again

This is not a Game