"Who is this French guy sitting with the Canadians?" I thought, as I happily slid off my pack at Arrastre Trail Camp. As I unpacked, made dinner, and

"Who is this French guy sitting with the Canadians?" I thought, as I happily slid off my pack at Arrastre Trail Camp. As I unpacked, made dinner, and setup my tent, I overheard the French guy talking about honoring his country's fallen soldiers. He wasn't French, he was Israeli. He was telling everyone at the picnic table about the Israeli Memorial Day, which was that very day. And that's the first time I met Lt. Dan, who is not French. 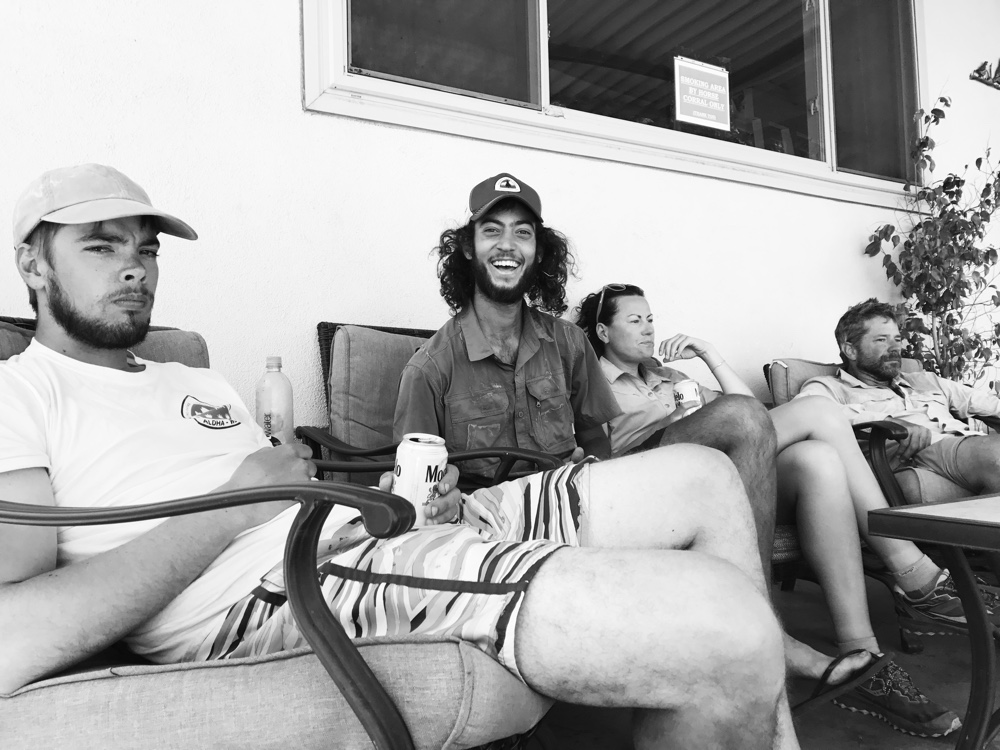 I got in touch with the Canadians again in Big Bear, and Lt. Dan was still with them. We all rented a cabin together that night and did our best to pack in eight thru-hikers. Since there were only three beds, we had to get a little creative for sleeping spaces. I slept on the floor in the living room. Lt. Dan slept in a closet.

The next morning, we all had breakfast together at a local restaurant, and then everyone took off for the trail together, leaving me behind in Big Bear. I was waiting for my new shoes to arrive at the Post Office. I took an Uber back to the trail a day later, the very moment my shoes arrived. I hiked like a mad-man for two days trying to catch Lt. Dan and the Canadians, finally catching up just two miles short of Deep Creek hot springs. This is where my friendship with Lt. Dan actually began.

His real name was Roi (pronounced Roy) and he was, in fact, Israeli. He rarely went by his trail name Lt. Dan. Roi had served for four years in the Israeli military and had earned the rank of Lieutenant. He started traveling immediately after being discharged from the military. By the time I met Roi, he had been traveling the world for about a year. Gringo once mentioned to me that Roi had a rare wisdom that came from experience, and there were times where I saw that in him. 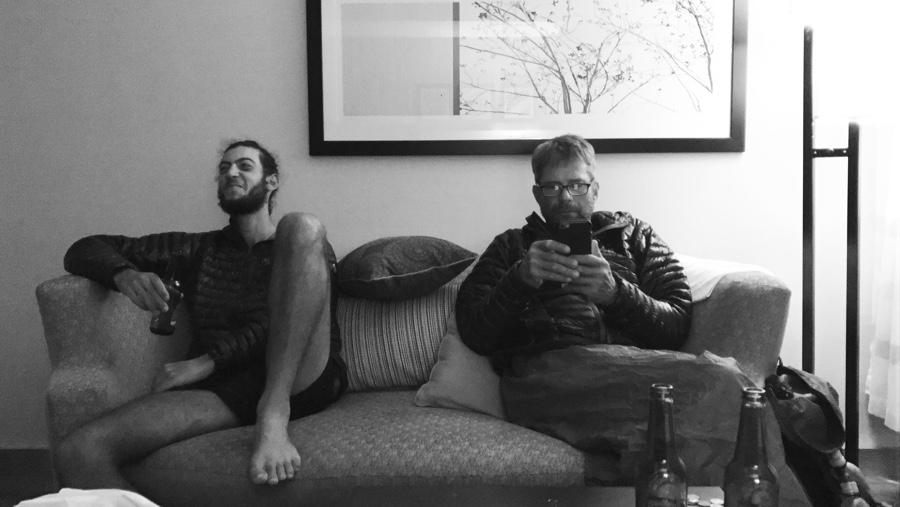 Roi (left) and Paul (right) waiting for laundry to finish.

I remember sitting in a circle amongst the rocks near the Deep Creek hot springs and eating dinner with the group. Roi, who had only met me once before, offered to boil water for my ramen noodles. I was stove-less at this point on the trail and that seemed crazy to Roi. I watch enviously as he made what he called a "ramen bomb" — basically just hot water, ramen noodles, and some kind of instant mashed potatoes all mixed together. He would later share his JetBoil with me every night, affording me hot water for my own ramen bombs, hot chocolate, or hot Apple Sluiter (powdered apple cider mix). Hot food and warm drinks really boost the morale.

Roi precariously gathers water from a creek buried under several feet of snow. This guy!

As time went on, Roi and I became inseparable. Whenever the group would split apart for while, Roi and I would stick together. We hiked roughly the same pace, although there were days where his youth got the best of me and I would wear myself out trying to keep up with him. Roi was from the desert, and as a result, he thrived in the heat of Southern California. I, on the other hand, was not from the desert. I did not thrive in the desert — I endured the desert. 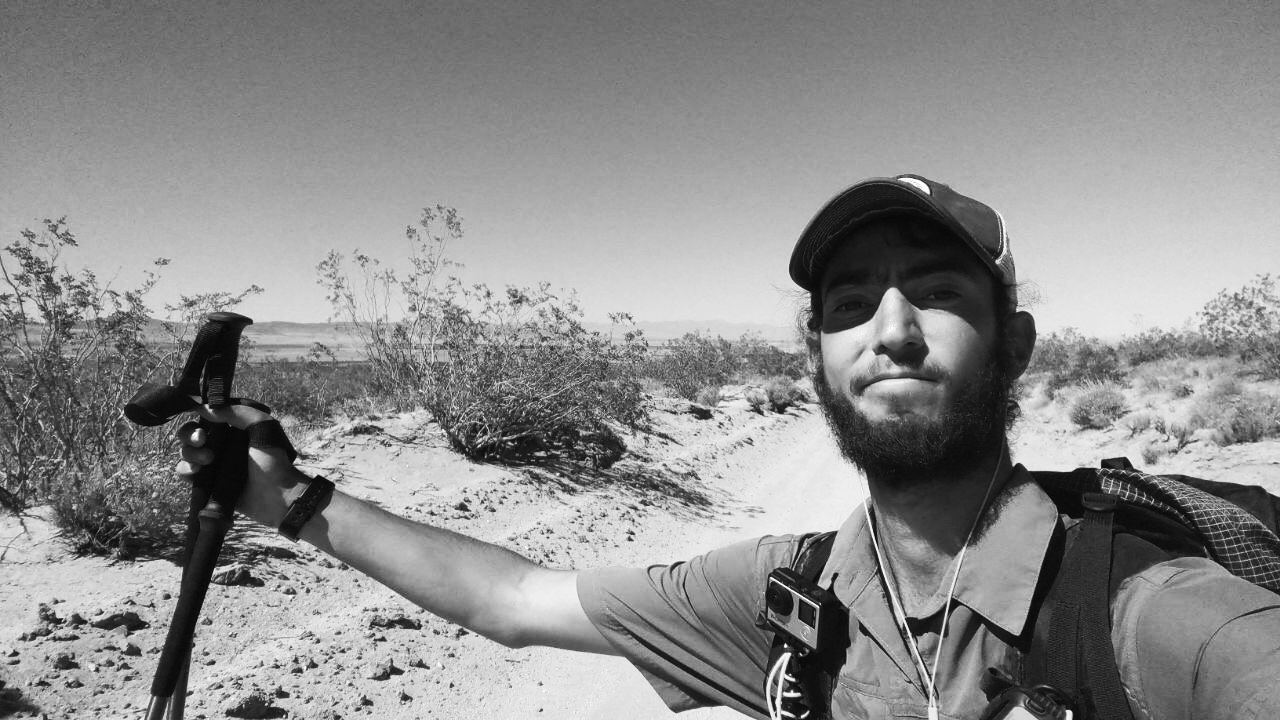 We would hike the remainder of the desert, cross rivers, summit Mt. Whitney, go up and over Forester Pass, endure the green tunnels NorCal, navigate the trail covered in blow down, suffer hordes of mosquitoes and flies, and walk the rim of Crater Lake...together. 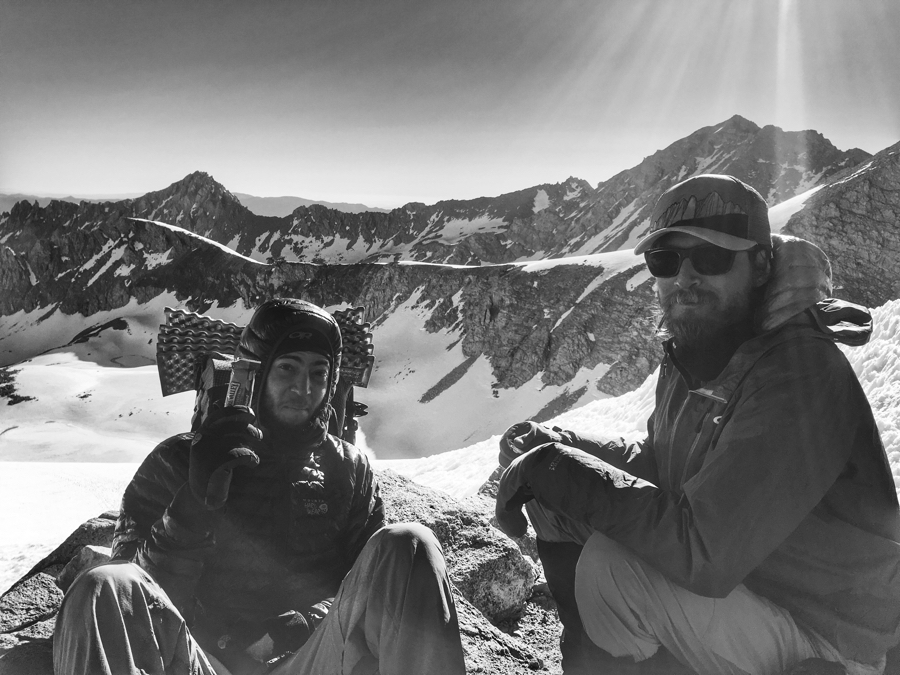 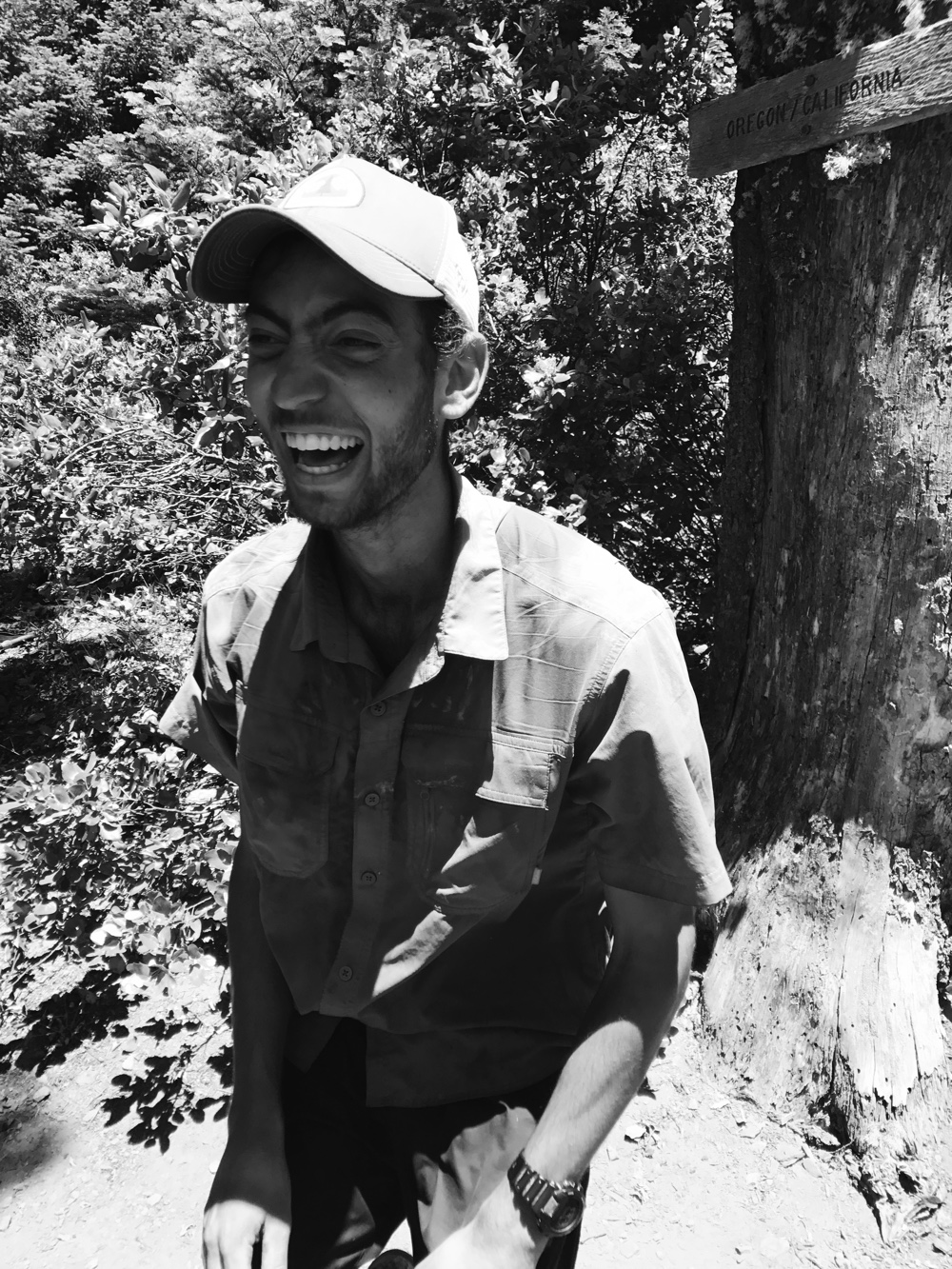 Finally made it to Oregon! A new state!

We would share innumerable experiences together in between, both good and bad. I watched Roi learn how to walk on snow. He was pretty slow at first, but by the time we reached the Sierra, he was a professional hiker, able to traverse just about anything the trail had left in store for him. Roi and I walked through California and Oregon together. We walked over the Bridge of the Gods and into Washington, together. 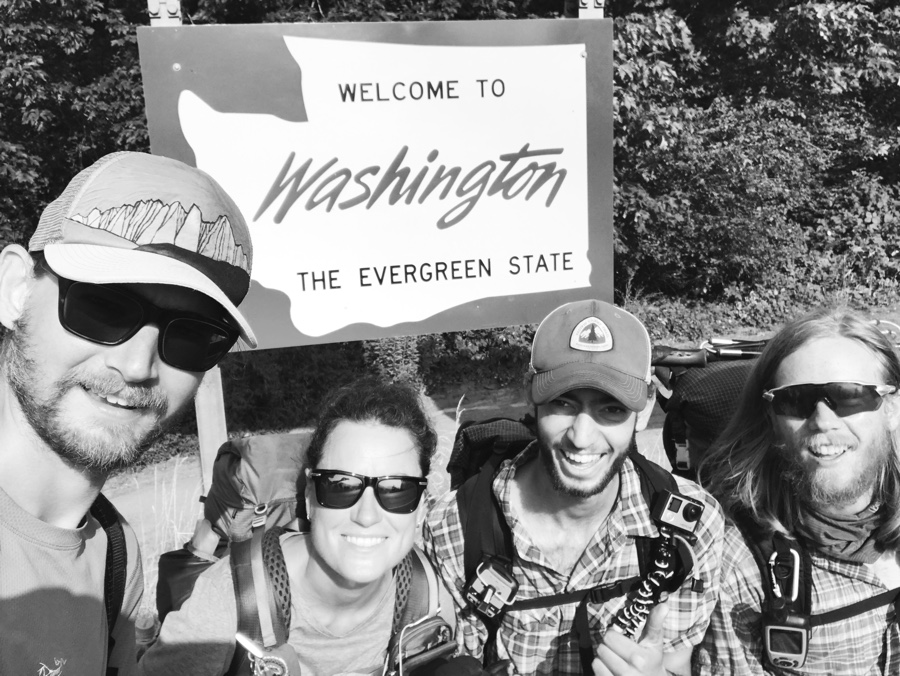 The last state! (From left to right) Me, Peanut, Roi, and Joe Dirt.

Roi and I had intended to do a 50-mile day up to Timberline Lodge together, but when the time came, I had a horrible shin splint and decided to cheer him on instead. Roy went on ahead without me. He may have been destroyed by the end of the day, but he did it! Man, I wish I could have been there.

OK. Notice how black his legs are? Roi had this habit of never cleaning his legs or feet between town days. He said he liked to see the shower melt the dirt off. Time and again I tried to get him to wash off in a stream or a lake, but I eventually gave up. Roi liked his dirt. Who was I to argue otherwise?

On trail, the two of us were essentially brothers. We would argue about things from time to time, but we couldn't imagine life on trail without each other. We did everything together.

That said, there was an unspoken tension growing between us, or maybe it was just inside me. I knew he had a deadline of early-October to finish the trail. He was in the United States on a six-month visa, which expired on October 6. I think this date was ever present in his mind — each time we'd stop in town, take a zero or a nero, or do less miles, he'd run through the time-vs-miles-remaining calculation in his head. It seemed stressful for him, and as a result, it became stressful for me too. Ever since we flipped up to Truckee, I sensed that Roi was more and more concerned about having enough time to finish the trail, and understandably so. He wasn't here to hike some of the trail until he ran out of time. He was here to hike the entire trail. 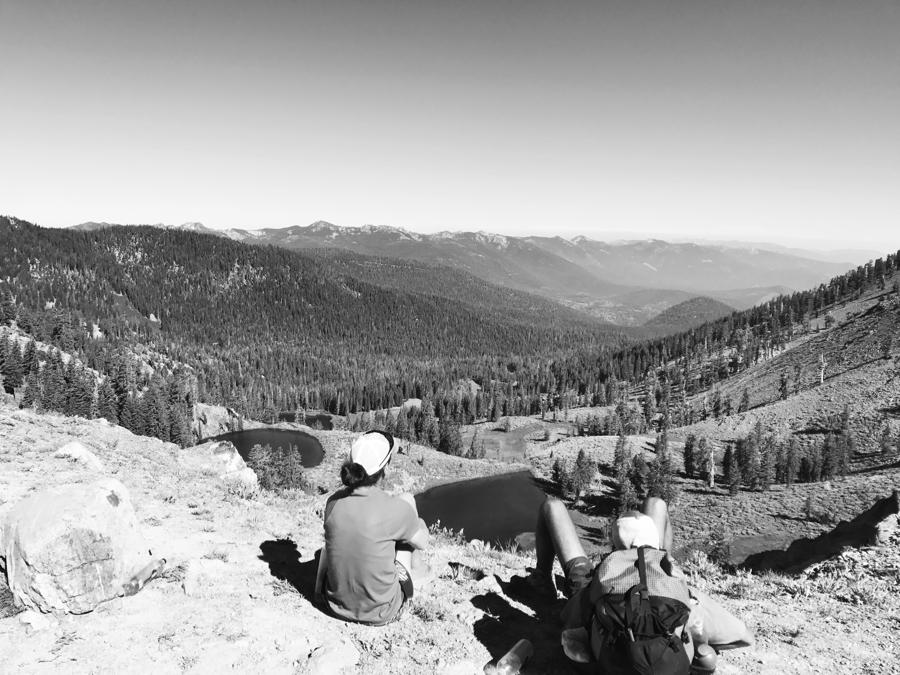 Roi and I parted ways in Trout Lake, WA. I knew the day was coming and I understood why he left — but it was still a surprise when he took the early hitch back to the trail. I never really got to say goodbye. I felt strangely awkward about our parting each time I'd catch up with him down the trail.

From then on, I would occasionally get into town just as he was leaving with other people. Back in Bishop, during that meeting at the Denny's, I remember that he and I looked at each other and wordlessly agreed to finish the trail together. In retrospect, it was never meant to be — in our minds, we each had a very different idea of how we would finish the trail. "Hike your own hike", they say. I realized later that I had been hiking Roi's hike for much of the trail, and that simply couldn't last forever.

Somewhere in Washington, Roi bought a plane ticket for home. His flight would leave on September 25, giving him a roughly a month to get to the Canadian border, flip back down to California, and finish up the Sierra. Roi would end up completing the entire trail a few days before I did. 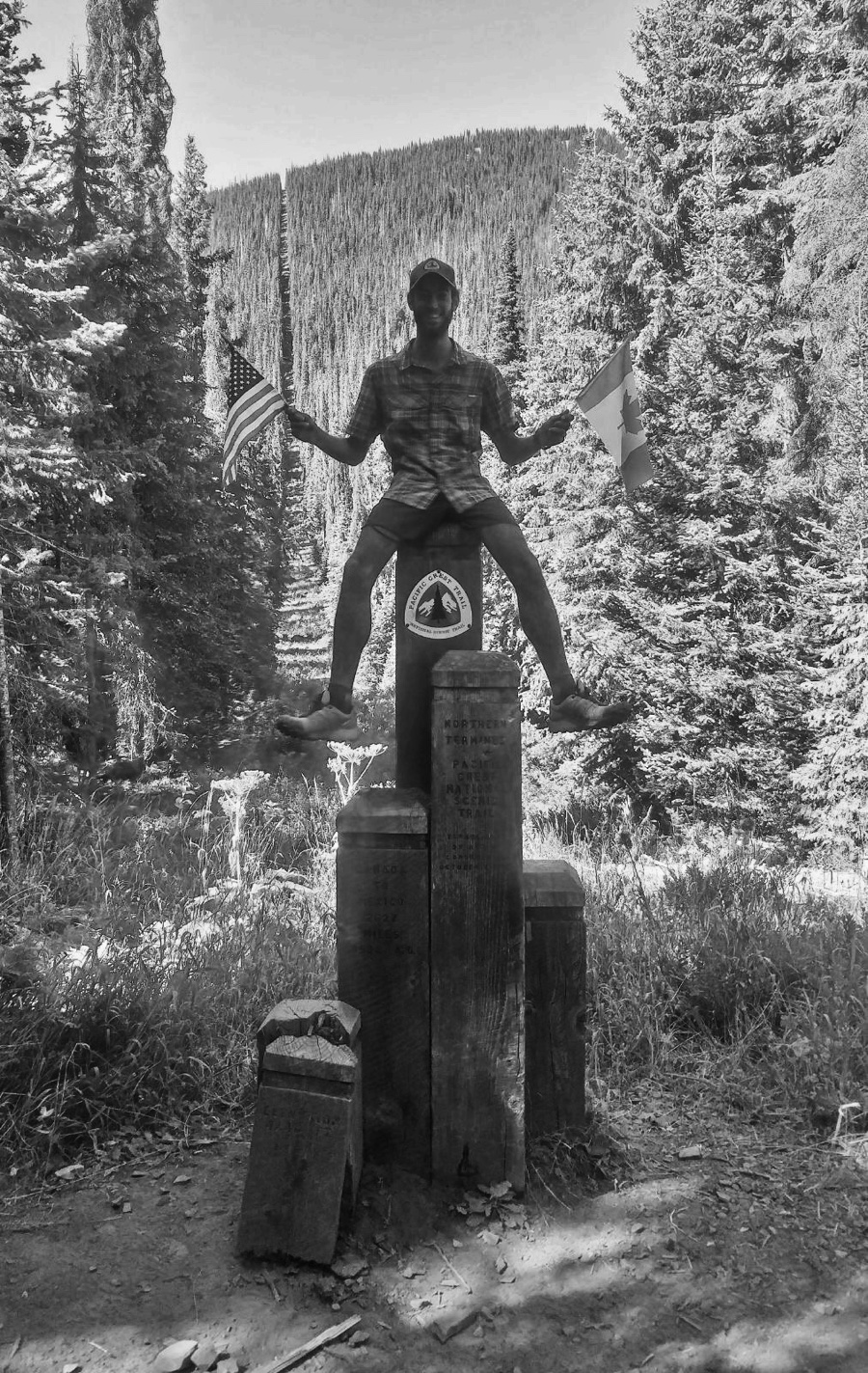 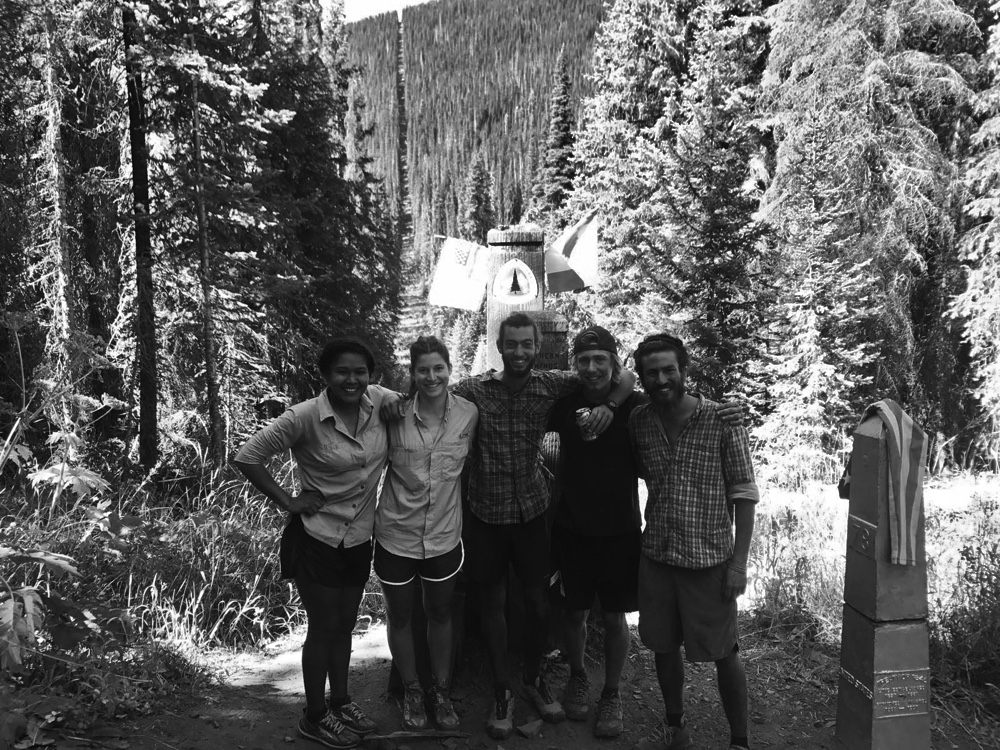 After we split up, I would occasionally use one of his signature phrases — "Lucky guy!" or "Aye my godness (oh my goodness)" — and along with giggles and laughter, it would bring back memories of the brother I met on trail.

The Story of My People: Part 4: Gringo