The Story of My People: Part 4: Gringo

I met Gringo at mile 77, in Julian, CA. My trekking poles had been stolen the day before, and I would spend the next three days waiting at Carmen's — a

I met Gringo at mile 77, in Julian, CA. My trekking poles had been stolen the day before, and I would spend the next three days waiting at Carmen's — a restaurant by day, hiker hostel by night — in Julian for Amazon Prime to deliver my new poles. Hikers would begin arriving at Carmen's in the early morning for breakfast, get some free pie from Mom's Pies down the road, resupply, and then loiter at Carmen's again in the afternoon, often waiting for a trail angel named Brewhiker to show up and give them a ride back to the trail. 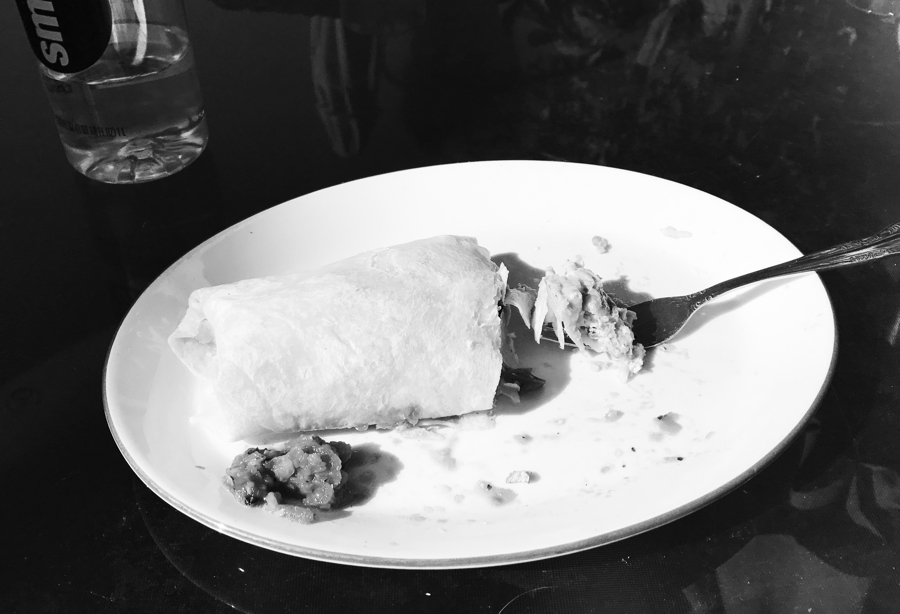 The Breakfast Burrito at Carmen's

I had just finished my free pie and decided to spend the rest of the day chatting with the hikers as they arrived at Carmen's. When I walked up the stairs to Carmen's outdoor-patio-turned-hiker-convention, my gaze immediately locked onto two of the most miserable looking human beings I had ever laid eyes on. One of them was Gringo, a man in his 60's, but with the face of someone in their early 50's. This face, however, was burnt red, with flecks of dust caked into some of the wrinkles around his eyes. If it weren't for his ultralight backpack and trekking poles nearby, Gringo was the picture of a tramp. 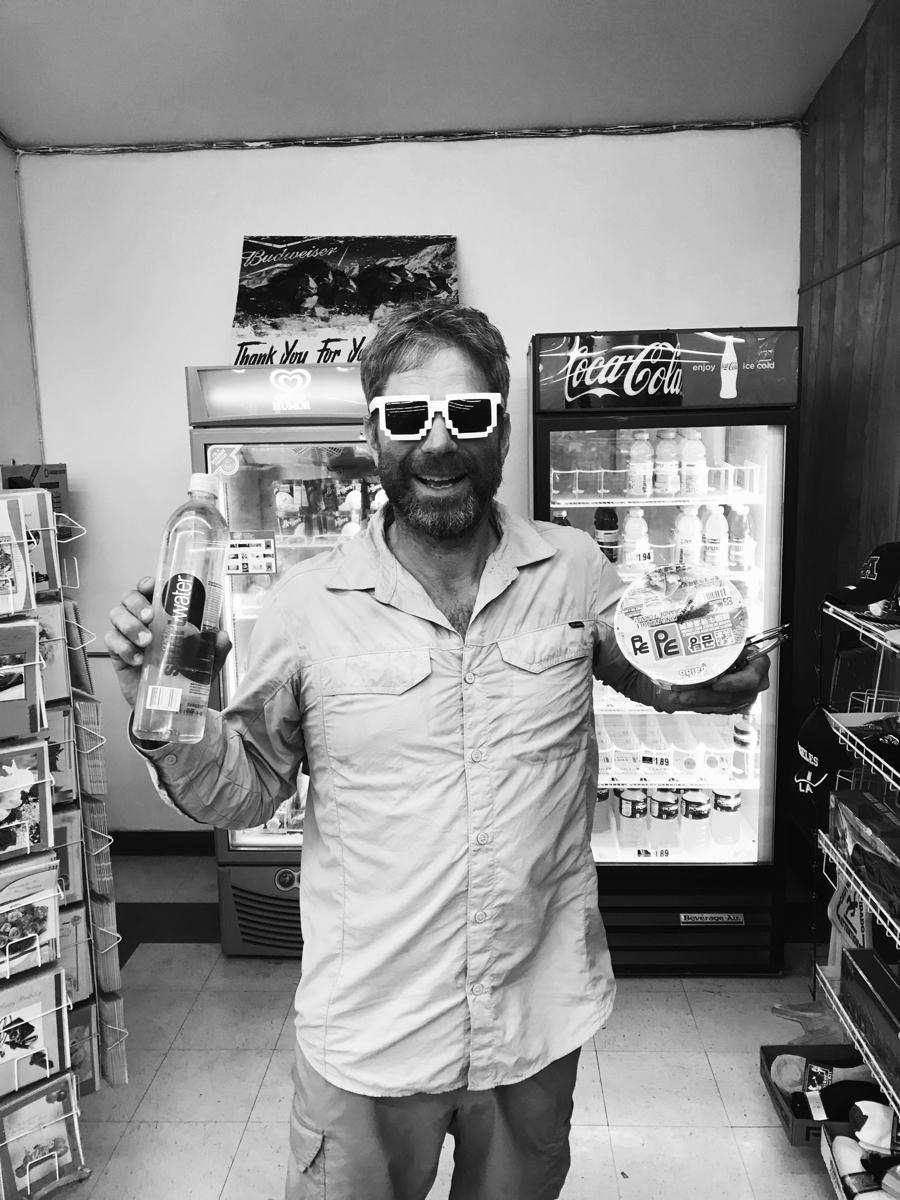 I'm not much of a conversationalist, but I tried to strike up a conversation with Gringo and his hiking companion, with little to no success. I went down the hiker-meet-and-greet checklist of standardized questions: what's your name, where you from, are you thru or section, what are you carrying, how much does it weigh, etc. What I got back was tired glares and one-word answers — but I was feeling especially chipper that morning, so I didn't give up. I switched from questions to telling bits and peices of my story so far. Nothing. I tried commiserating with them, about how hard and hot its been. No response. Eventually, I was able to pull out of him that he was originally from Washington, worked in Alaska, but lived in Mexico. Really.

I sat quietly at the table with Gringo and the other fella until it got a little awkward. As I got up to leave, I smiled and said, "Well, it was nice talking with you." "You too." was all I got in response. Everyone has their rough days, I suppose, and I didn't hold it against him. The desert isn't easy and it never lets up.

That was the technically the first time I met Gringo, but it didn't go well, so I'm not counting it.

The night I walked into Arrastre Trail Camp, there was a man sitting at the table with the Canadians and Peanut, smiling, joking around, and laughing. I did a double-take. Was this that quiet guy from Julian? No, it couldn't be. This man was...happy. This was the second time I met Gringo. In his defense, you don't really have an option to be anything other than happy when you are with the Canadians and Peanut. He was grinning and throwing his head back with laughter. Connor must have been at it again with his one-liners.

I would see Gringo every time I met up with the Canadians. At the McDonalds in Cajon Pass, Gringo, Lt. Dan, and I decided to wait out an impending storm in a hot tub at the local Courtyard Marriot. The Canadians and Peanut wanted to press on. And, in a way, this was the third time I met Gringo. 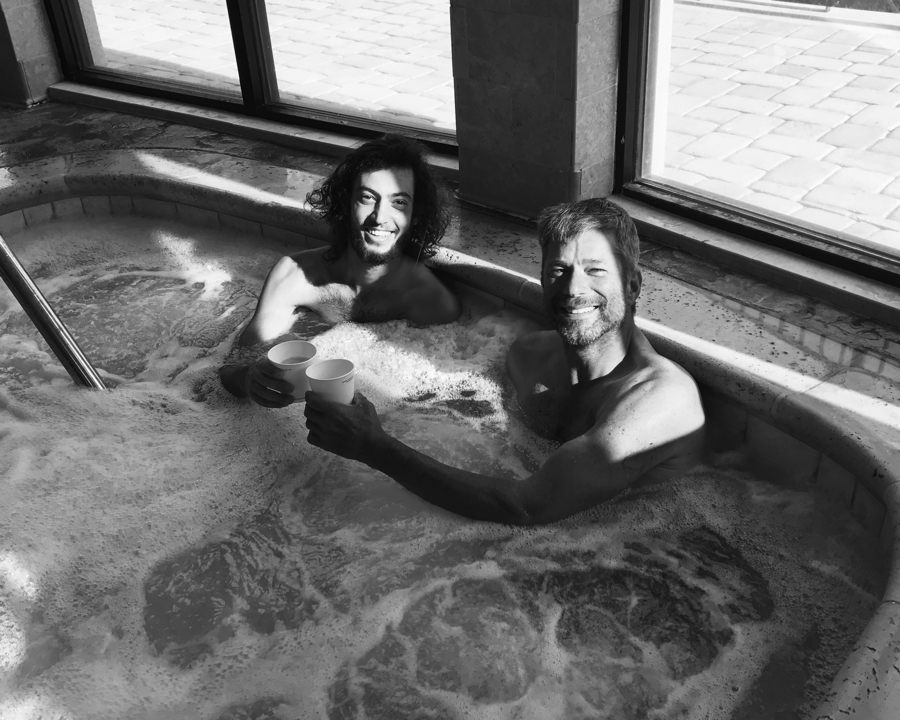 We sent this picture to Peanut. She got it in the middle of a snow storm.

For a while now, I had felt like a bit of a hanger-on with the Canadians, and I kind of thought of Gringo in that way too. When the Canadians and Peanut went on ahead of us at Cajon Pass, I got to know the real Gringo — Paul was his real name. Paul was a calm, tough, and methodical man. He planned each day on the trail, carefully noting where water was, how much elevation gain and loss there would be, and how far we would expect to go each day. He was so methodical that Lt. Dan and I would often blame him for not placing a water source earlier in the day for us, or for putting a climb at the end of the day instead of the beginning. "Paul, you really screwed up when you laid out this trail."

It wasn't until we left the hotel and the hot tub that I gained respect for Paul and understood just how tough he was. It was a bluebird day, but a little cool and breezy. Paul had noted that there would be a 12-mile climb that day and very few water sources along the way. About an hour into the day, I noticed a drop in temperature, the sun suddenly disappearing, and wait, was that... thunder?

And on your left, you can clearly see a storm.

I remember the next few seconds happening in slow motion. I turned to my left and looked down the valley. "Keep moving!" bellowed Paul, from quite a ways behind me. I turned back to face the trail and cranked up my speed to 4 miles per hour — but it was already too late. We had reached the base of the 12-mile climb, but the storm had caught us and was already raining down sleet.

Paul. Ever the planner.

Paul, a man in his 60's, would endure a freezing rain, biting wind, slush and ice-packed shoes, and a constant uphill grade for 12 miles. He could keep up with a 37 year old and 24 year old, doing the same big miles days. Paul was an impressive measure of a man. 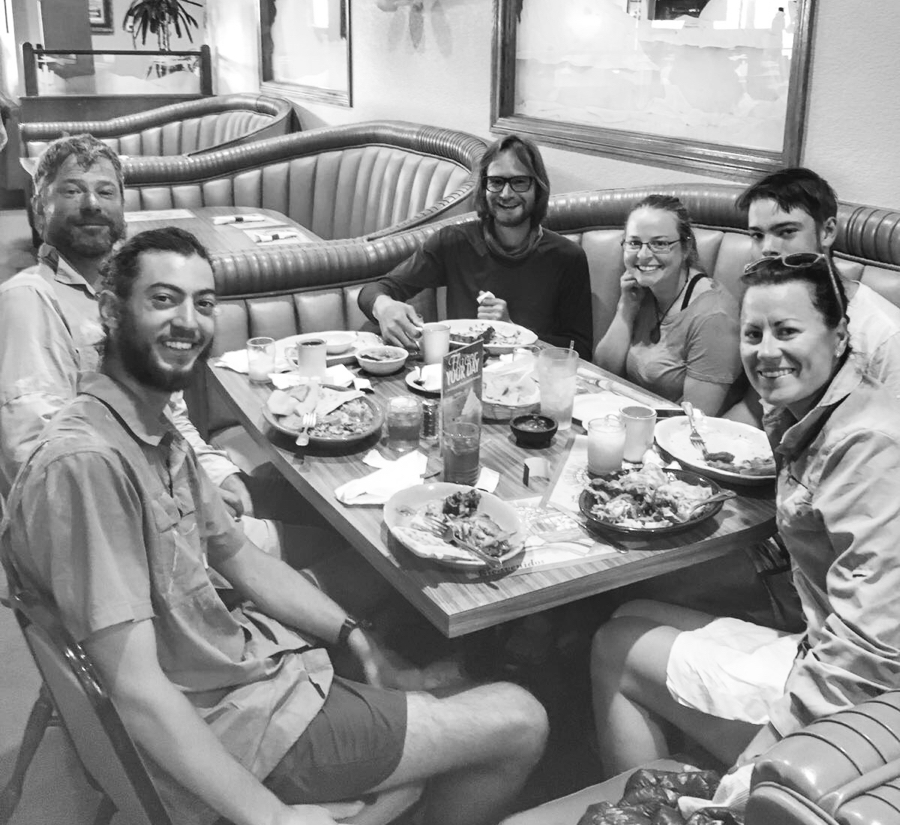 (Clock-wise, starting bottom left) Lt. Dan, Gringo, Me, Katie, Connor, and Peanut at a breakfast buffet in Agua Dulce. It's deceptively dangerous to be around thru-hikers while feeding.

Just outside of Agua Dulce, CA, I watched in horror as Paul rolled his ankle and tumbled to the ground, grasping for his foot and squinting and hissing in pain. Moments after that, Paul got up and walked another hundred or so miles on a busted foot. Why? Because he had too. We were too far out to call an ambulance or hitch a ride into the nearest town. I remember thinking that I would probably need Paul's level of grit and determination if I was ever going to finish this trail. 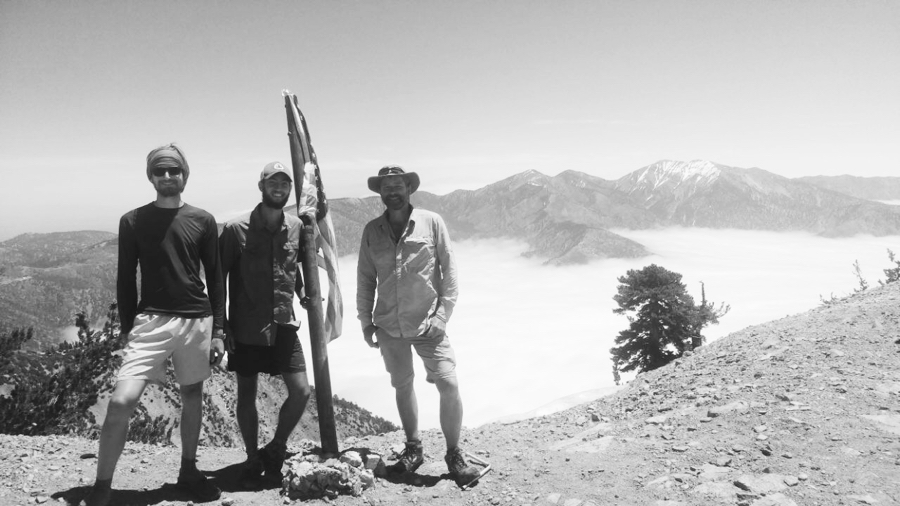 At the summit of Mt. Baden-Powell 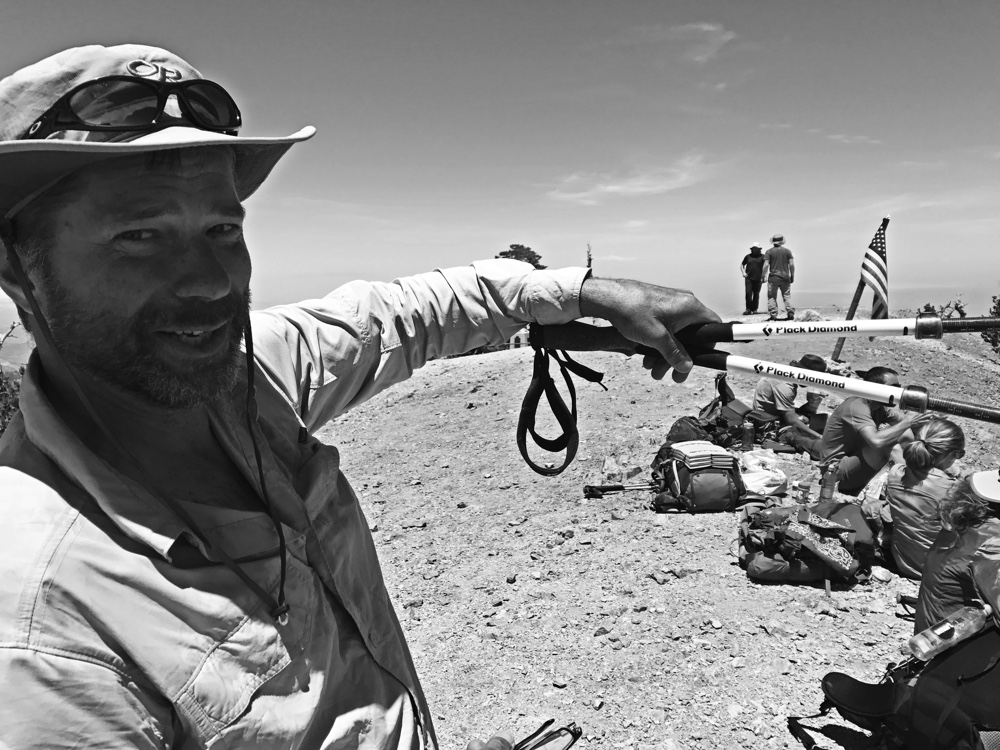 Paul shows off his high-end Plack Diamond carbon fiber trekking poles, not to be confused with the garden variety Black diamond poles.

As it turned out, I would. Somewhere in Oregon, I developed a shin-splint in my right leg. A shin-splint is essentially the shin muscle being slowly torn away from the shin bone. Every single step for the next 700 miles was a symphony of pain turned up to 11 — but I walked anyway, determined to finish, no matter what. Paul had sand. Now I did too. Thanks, Paul.

Paul and I hiked about 300 miles through the desert together, with Paul mapping and planning out each day. I realize now that I had relied on Paul to get me through the desert and up to Tehachapi. I can't actually imagine what it would have been like to do that without him. Paul and I separated at Tehachapi, only to meet again, briefly, before summiting Mt. Whitney. I never saw him on trail after that.

Paul briefly demonstrates how to walk on snow to Lt. Dan

The last thing Paul did for me was to give me some of his food. I left early in the morning to summit Mt. Whitney and Paul started out later that morning for Whitney Portal. Before he left, he dropped some of his extra food into my bear canister — just because that's who Paul was. Kind and a friend to the very end.

How many more miles to Canada?

The day before Whitney was the last time I walked the trail with Paul. After that, I would text him from time to time just to see where he was at and how he was doing. Texting him was reminiscent of my first meeting with Paul: brief questions and short answers — it's just not the same. I wish I could have finished with Paul, but the trail had different plans for both of us.

The Story of My People: Part 3: Peanut