The Story of My People: Part 2: The Canadians

The first time I heard Katie laugh, I knew I liked these people. It was mid-afternoon in the Southern California desert. Allen and I were making our way down to

The first time I heard Katie laugh, I knew I liked these people.

It was mid-afternoon in the Southern California desert. Allen and I were making our way down to Tule Spring at mile 137. I badly needed a water break. Allen is a fast hiker and keeping up with him left me drenched in sweat and slightly dizzy with fatigue. We reached the spring, filled up our water bottles, and sat down by a small group of hikers in the shade nearby.

I don't remember exactly what happened next, but I do remember that the first time I heard Katie laugh, I knew I liked these people. Allen was talking about the metric system and I think he made some rediculous comment about Celsius vs Fahrenheit, causing Katie to let out a bit of a belly laugh. Connor, her boyfriend, was trying to nap next to us — but as it always is with Allen, talking comes first. Connor woke up and joined in the conversation with his own clever quips and one-liners, causing everyone within earshot to hold their gut, laughing. Yup. I liked these people.

Hike heavy! Hike when it's hot!

We all introduced ourselves and mentioned where we from. Katie and Connor were originally from Ontario and just north of Michigan, where I'm from. They were Canadian! And I love Canadians! Who doesn't love Canadians? We talked about gear, weight, and when they saw me crunching on a brick of raw ramen noodles, we chatted about that too. "Hike heavy! Hike when it's hot!" was their group motto. These people were nuts, but I liked them immediately.

Standing nearby, there was another girl quietly filtering water and giggling at the goofy exchange between Allen, Katie, and Connor. I would later come to know her as Peanut, but that's a story for another time.

Allen and I passed the Canadians later that evening on the trail, and I honestly thought I'd never see them again. Little did I know that I would bump into the Canadians again, and again, and again. In fact, we all camped together that night, and I saw them just as I was leaving Paradise Valley Cafe the very next day.

I heard Katie and Connor's distinctive laughing before I saw them and my face must have lit up like the sun.

And that was it, or so I thought. Allen and I split up again at Idylwild and I was on my own. I wouldn't see Katie and Connor again until mile 256, the Arrastre Trail Camp. The day I hit mile 256, I was destroyed. My knees hurt and the pain was taking a toll on my mental state. It was just a rough day. When I hobbled into Arrastre Trail Camp, I heard Katie and Connor's distinctive laughing before I saw them and my face must have lit up like the sun. "People I know! Thank God!" I yelled. I was so happy to see them, even only having met them once before. Two other people had joined their small band too: Lt. Dan and Gringo. 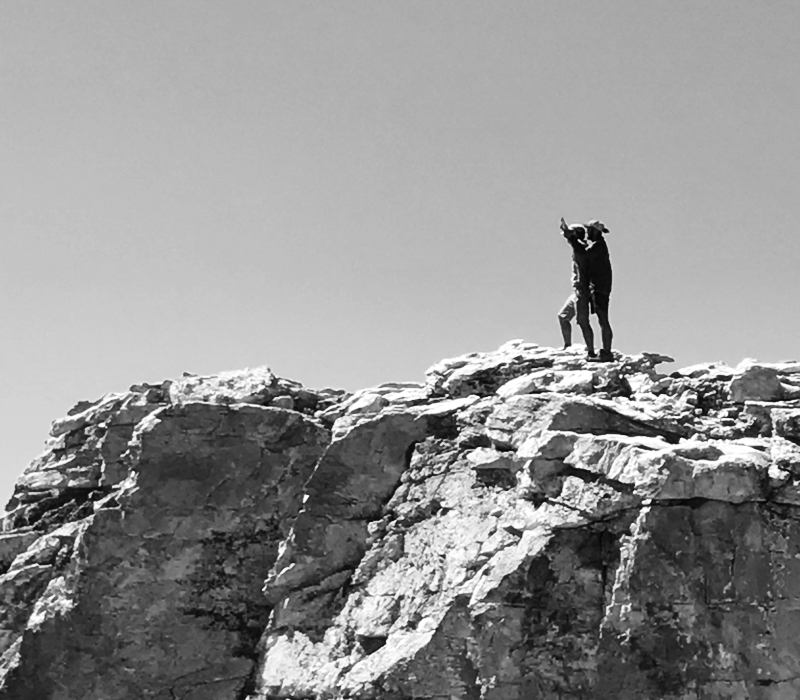 Connor (left) and Lt. Dan (right) recreating a scene from the movie Titanic

The next time I met up with the Canadians was Big Bear. Allen, Lt. Dan, Gringo, The Canadians, Peanut, and I shared a cabin there. I remember thinking that I wanted to hike the rest of the Pacific Crest Trail with these people. Lord knows I tried.

It wasn't until Deep Creek Hot Springs that my friendship with the Canadians was cemented for me. I remember hiking as fast as I could out of Big Bear to catch up with my new friends, who had left only a day before me. I was approaching fifteen minute miles for two days, and finally, two miles before reaching the hot springs, I found them soaking in a pool of water and joking around in the shade.

I would hike a good chunk of the remainder of the desert with at least some combination of Lt. Dan, Gringo, The Canadians, or Peanut. 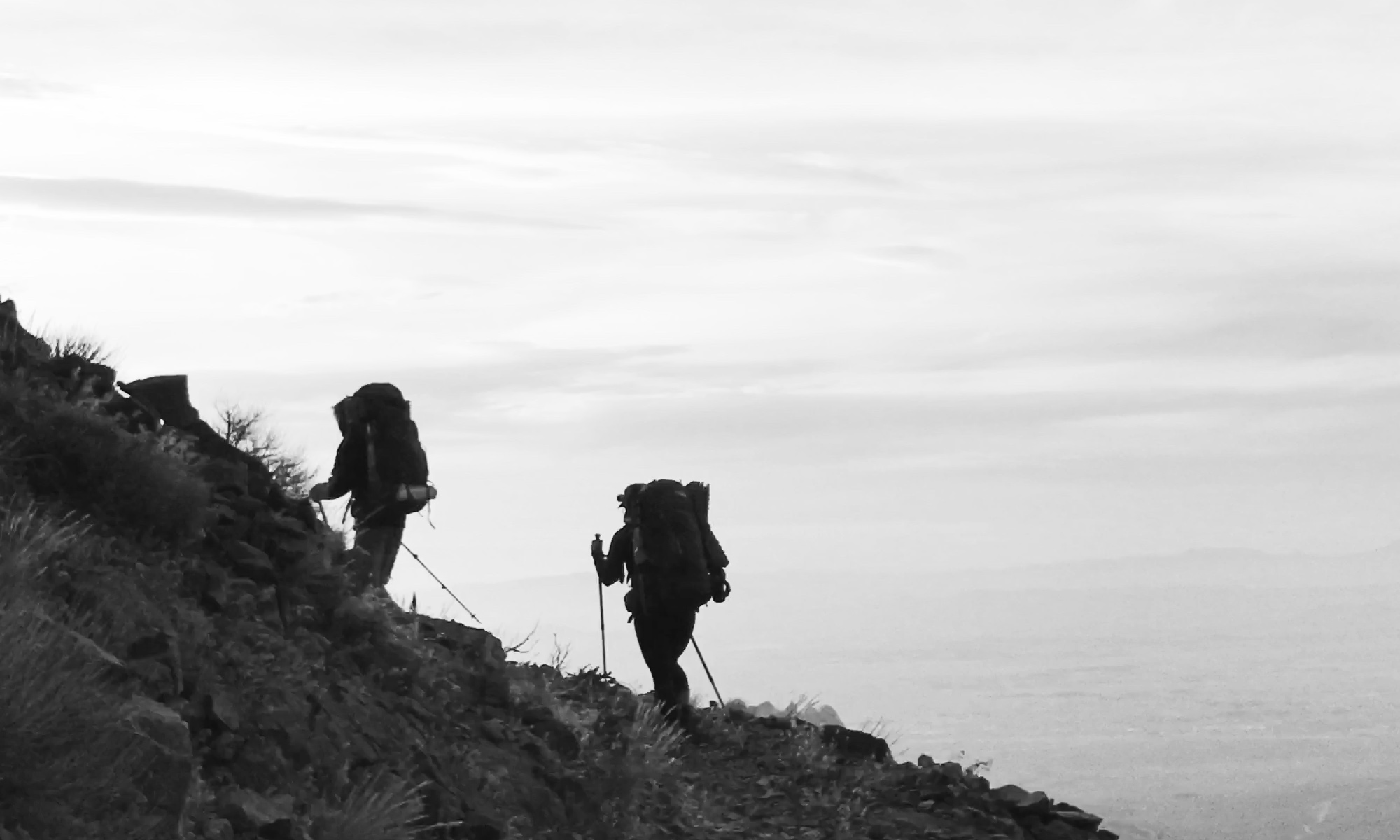 Connor and Katie lead the way

Katie was a short, whip-smart go-getter — and brave. Without hesitation, she'd eagerly walk across a log high over rushing water or stare down Mt. Whitney or Forester Pass.

Connor was a steady, practical guy, with a one-liner for every occasion. Route-finding came naturally to him, even through the nastiest of tree-well pocked, snowbound mountainsides. Ever a true Canadian, cold conditions were his element.

The amount of joy this combination brought to my days on trail has left me forever in debt to both of them. There were days when my whole body ached with pain, but it didn't matter. I could always count on a lively conversation at lunch or at dinner that would make me smile and nearly roll on the ground with laughter.

When we all stayed at the Happy Haven RV Park in Lake Isabella, they both became fast friends with my brother Tim and his wife Annabelle (they flew out from Vermont to hike with me in the Mojave desert!). Katie and Connor got me to boot-ski in the Sierra. I climbed Whitney with them. I faced the ice wall that was Forester Pass with them. I learned how to hike the trail with them. 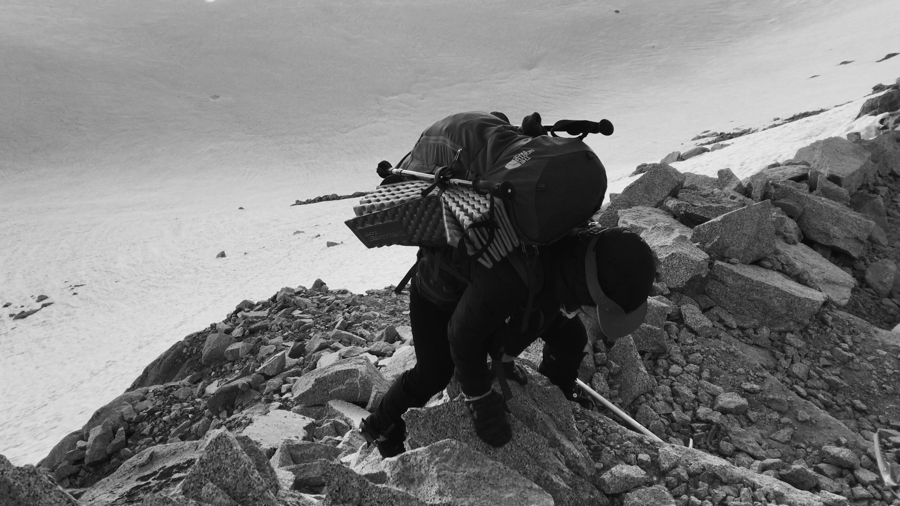 I remember Katie and Connor busting a gut in a hotel room, watching my horrified expression as I crunched into a Centrum Multi-vitamin. 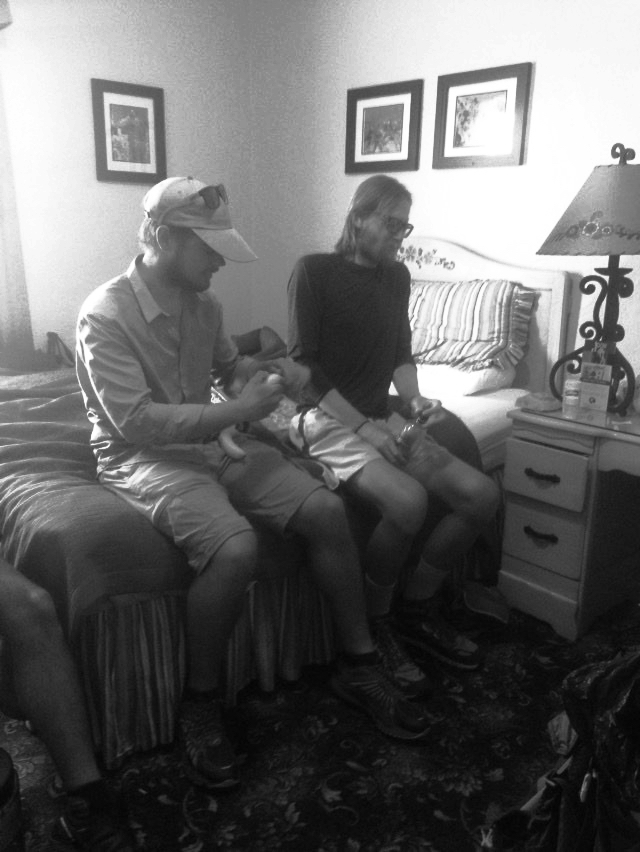 If you chew it, you get ALL the vitamins. - Katie

I remember sitting at the Denny's in Bishop and listening to Katie say that we all need to face the facts and understand that we probably aren't going to do the entire trail together. I remember my shoulders slumping and my heart sinking as she spoke. She was right, but it still hurt. That was one of my worst days on trail. I left the Denny's that morning mixed-up and heartbroken. Later that day, Connor gave me his hitch to Truckee, because he knew how nervous I got about hitch hiking. At least I had a few more days with them.

Leaving Sierra City, I saw them for the last time. I was pretty bummed that afternoon. These were my friends and it felt like I was turning my back on them. I don't remember signing up for this part of the trail.

The trail was still teaching me to let go, perhaps because it knew I had so many more people to meet along the way. I am proud to have walked so much of the trail with Katie and Connor. Mention the Canadians, and all sorts of nostolgia and memories coming flooding in.