I was sitting by a loud, crashing creek in Washington, the air moving at a brisk pace through a craggy split in the earth and down into the valley below.

I was sitting by a loud, crashing creek in Washington, the air moving at a brisk pace through a craggy split in the earth and down into the valley below. I had stopped for lunch and promptly plopped down into the rockfall surrounding the creek. I was accompanied by Peanut, Donkey, Pollywog, A-Game, and Joe Dirt.

The water was rushing around, through, and under the split in the earth. Maybe rushing is not the right word... raging? Roaring? Anyway, it was loud. From time to time, I could make out a small "Meep Meep" from the rocks surrounding us. Pika's are a small mouse/rabbit-like rodent and these dudes are everywhere in Washington. At one point, Donkey responded to one of them, triggering the little guy to just go off. "Meep! Meep Meep Meep! Meep Meep! Meep Meep Meep Meep Meep!" It went on, non-stop, for like two minutes.

When it was over, we all lit up with gut-busting laughter and wide-eyed astonishment. In between his giggles, Donkey remarked that the little pika was probably relaying the "Story of His People" to us, perhaps in the hope that we might tell it to the Pika's on the other side of the raging creek. "There are only a few of the exploration group left! Do not cross the river! There is only death!" Or something like that. It could have been stock tips, too.

But that got me thinking about the story of my people: those that I had walked with, missed walking with, and was still walking with. What would I Meep! with my last breath? I think I'd meep the Story of My People.

So, without further delay, in order of appearance, Part 1: Allen.

"You want half?" Allen was already awkwardly tearing his In-N-Out burger into two slapdash peices.

"Uh... sure!" I said, eagerly reaching for the sloppy mess that used to be a hamburger.

And that was how I met Allen from Ohio, a little more than 100 miles into the trail. I was at a picnic table in Warner Springs napping and waiting for my clothes to dry out. Allen just sat down next to me and started talking... and then never stopped talking for the next few days.

Allen is stocky ginger with a big, red beard. He has the uncanny ability to carry on a conversation, non-stop, while climbing up a hill. I don't think he actually needs to breathe oxygen. I once tried to keep his pace and keep up with my part of the conversation, but it nearly killed me. Peanut would later confirm this hazard when walking with Allen. He seemed to have endless stamina. Eventually, I figured out that if I took the initiative and asked him short, five-second questions, he would talk for about five minutes giving me time to catch my breath. When he was finished talking, I'd ask him another five-second question and get another five minutes of breathing. And that was Allen. Endless energy and unreserved friendship.

I just needed to walk with the right people. Allen was one of those people.

Originally, I had this bonkers idea that I was going to hike the trail alone. I didn't need people, and people didn't need me. A few days on the trail, and I was already in the process of re-evaluating that idea. Hiking with Allen made me realize that I want to walk with people. I want to share the hard days and awesome experiences with someone. I just needed to find the right people. Allen was one of those people.

Allen and I would see each other on and off until Lake Isabella, at which point we parted ways for the remainder of the trail. Each time I caught up with him, I would grin from ear to ear. At Paradise Valley Cafe, I witnessed Allen devour a regular bacon and eggs breakfast paired with the largest, bone-in ham steak I've ever seen in my life. "Was this hiker hunger?" I thought. "Was this level of gluttony going to happen to me?" 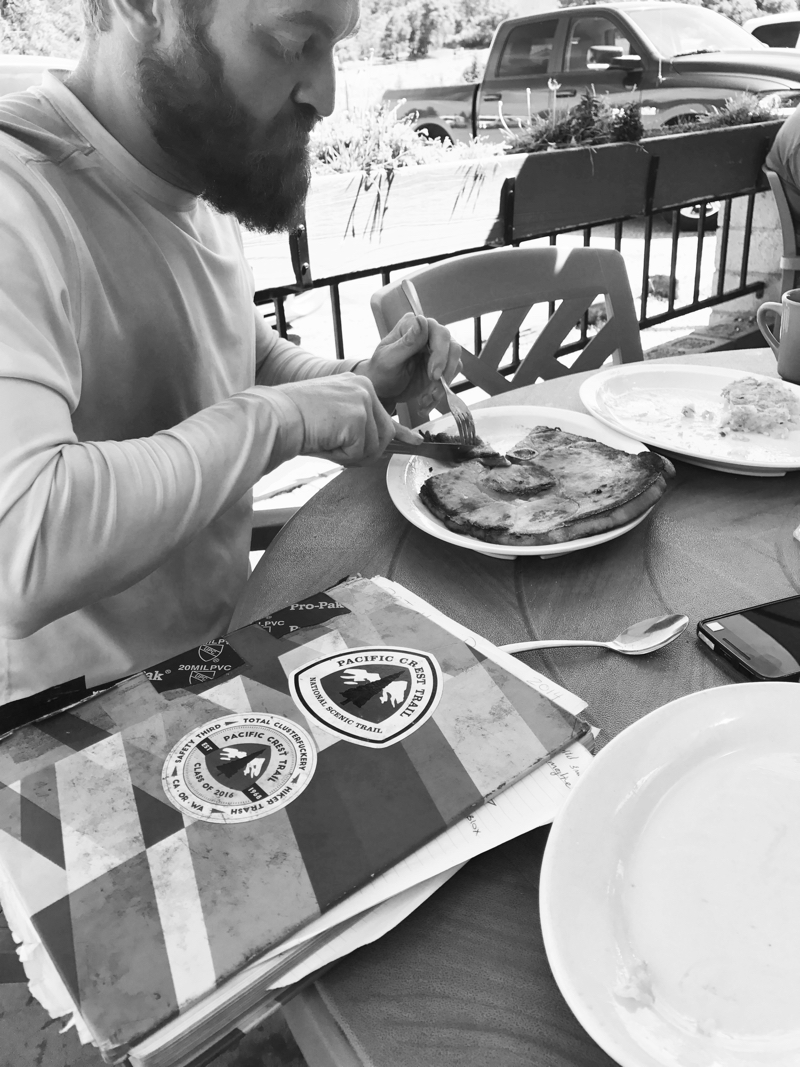 At Idylwild, he bought me an Ale-8-One, which is some kind of ginger pop. He was so excited to find it that he needed to share it with someone. That someone was me. 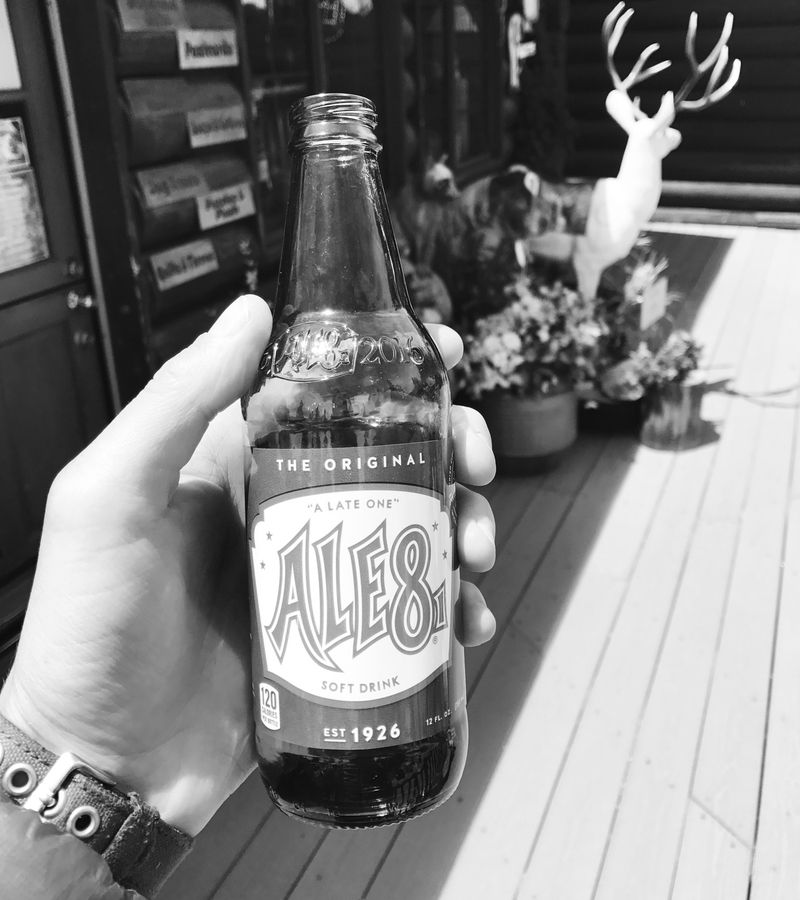 Ginger pop from a Ginger!

In Big Bear, he texted me out of the blue to meet up for breakfast at the Grizzly Manor Cafe. I bought him breakfast there. While we ate, he contacted Peanut and the Canadians, getting us a place to stay in town that night. We all had a family dinner together at a cabin that evening. Allen, Lt. Dan, and I tried walking through the McDonald's drive-thru after hours (no luck). He bought ice cream for Peanut. That's just who Allen was. Friendship wearing a bright, red beard.

I missed Allen after that. Of all the people I had the privilege of walking with, I feel shorted about my time with Allen. I wish I could have walked more of the trail with him, but it wasn't meant to be. 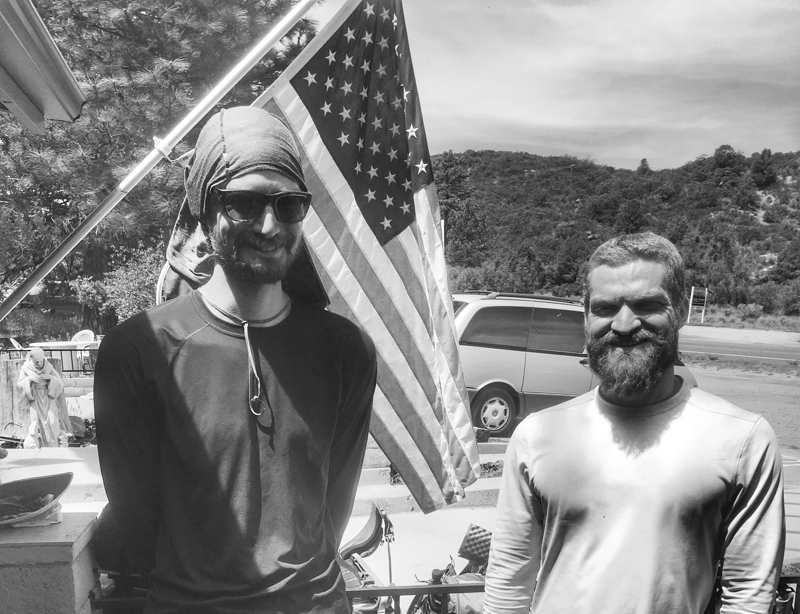 Allen left enough of an impression on me that it changed me. I wanted to be with people now. Shortly after the two of us met, Allen and I would later meet three people that changed my course on the Pacific Crest Trail forever. If I had never met Allen, I would never have met The Canadians and Peanut.

The Story of My People: Part 2: The Canadians