Ah, the Therm-A-Rest NeoAir Xlite. The perfect UL pad. I purchased the large model, because I'm 6'3". The large is also 5" wider than the small and regular

Ah, the Therm-A-Rest NeoAir Xlite. The perfect UL pad. I purchased the large model, because I'm 6'3". The large is also 5" wider than the small and regular models. This extra length and width meant the pad was heavier and bulkier, but it also meant that my feet and elbows wouldn't be on the cold hard ground as I slept. The Xlite was also thick, so being a side sleeper, I could roll around on the pad and my hips and bum would never press through to the ground.

I loved my Xlite and I expected to use it through my entire thru-hike of the PCT — if it weren't so friggin' noisy and if it didn't pop all the time. Getting onto the Xlite sounds like a mylar space blanket being trampled by a herd of mice. Once in place and ready for a good night's sleep, I would try not to move. Every tiny movement conjured up the noise again, annoying me and anyone else within a fifty-foot radius. Put a few hikers in close proximity, all with NeoAir's, and you've the perfect recipe for a sleepless night.

On one sleepless, crackly night I woke up groggy, irratible, and cold. Very cold. And confused. I was on...the ground? Had I slid off my pad during the night? Why does Steve Forbes need to fly back to his house to get his iPod? Can't we just buy another one when we get to the North Pole? I flung my arms out to find the pad again. Nothing.

That meant I was on my pad, but it was flat. I rolled off the flattened Xlite, found the valve in the dark, and started blowing until it was at my desired inflation point. I rolled back onto the pad and fell asleep. Gotta get that iPod to the North Pole. I woke 50 minutes later. Cold. On the ground. Again. I did this for four nights on trail. 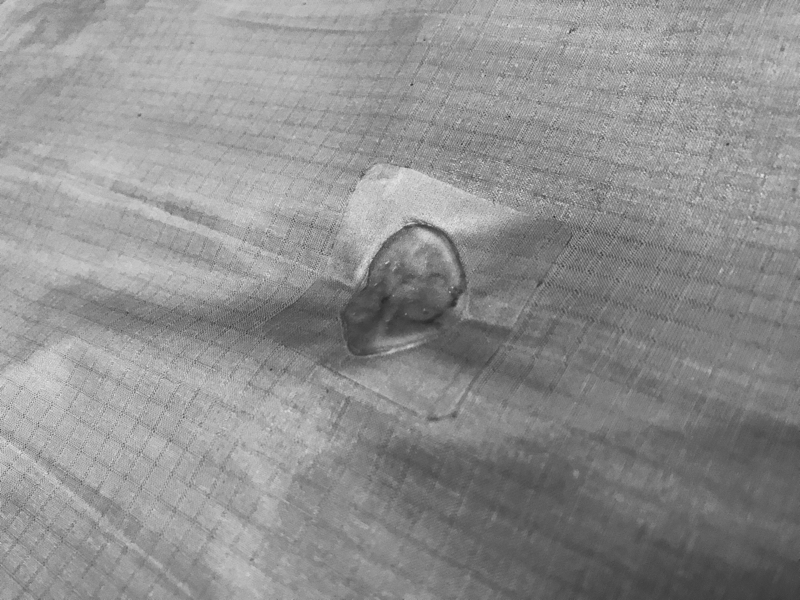 The NeoAir was popped and patched twice on trail. The third time, I had enough. This thing was going back home and I was getting a new pad. Any other pad would do at this point.

I tried a Klymit for a while, but it was heavy, short, and cold. So, that one got hikerboxed real fast.

Before I get to the namesake of this review, I need to describe the shameful valve on pretty much every other pad on the market, including the valve on the Xlite, which is a $200 pad. It's such a shoddy, run-of-the-mill valve that doing a search for the word "valve" on the Xlite product page turns up absolutely nada. It's just a black, plastic, screw valve. When you take your mouth away from it to catch your breath, the air escapes. To counter this, I developed an odd lip-smash technique where I'd blow into the valve and while I caught my breath, I'd smash the end of the valve into my lower lip to keep all my hard work inside the pad. It's a slow method that involves much slobbering and drooling. Not fun. 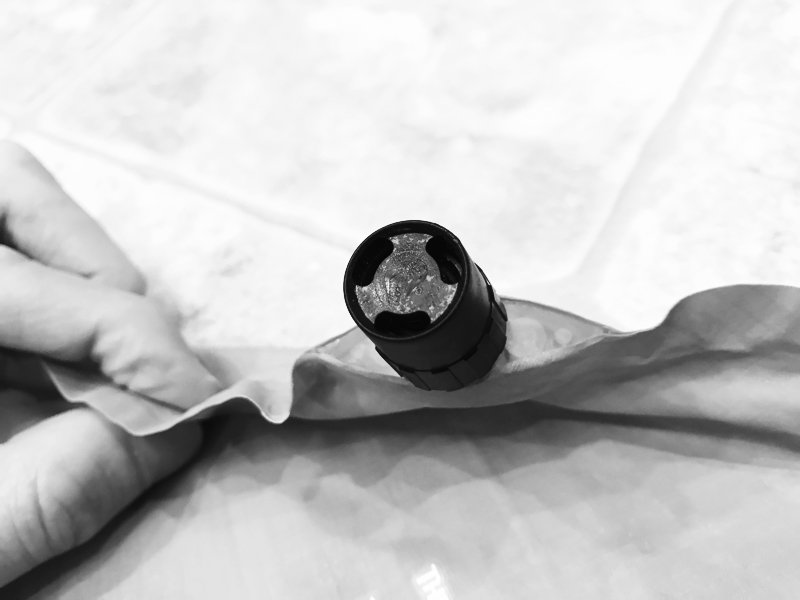 Deflating the Xlite is also slow. Unscrew the valve while laying on it. Wait until you hit the ground. Roll up the pad once to squeeze the remaining air out. Then roll it up a second time to pack it away.

Wait. "Isn't this review about the Sea to Summit pad?" you say. Why, yes it is!

Finally, we come to the star of this review: the Sea to Summit Ultralight Insulated. It rings up at $150, $50 less than the Xlite. The large is roughly the same dimensions as the Xlite, but's slightly heavier at 19oz. It's also insulated with the same reflective material as the Xlite, but it only covers the torso area. At least it's silent, for the most part.

Honestly, this was a throw-a-dart decision. I looked at the price and availability on Amazon, it's available sizes, and just bought it. I really knew nothing about it, but it ended up being a great pad for one, and only one, reason: the valve. Like I said, its not the lightest pad at 19 oz, and its not the warmest pad at an R value of 3-ish. The shell material was more durable than the Xlite, but that wasn't the feature that kept it around. It was something that most people never consider: the valve.

The valve on the Sea to Summit Ultralight Insulated is a multi-function valve with a nest-flap configuration. The outermost flap covers a check valve contained on the innermost flap. What a marvelous and obvious thing to include! Inflating the pad can be done in 8 to 10 breaths, simply because the check valve doesn't allow air to escape when you take your mouth away from the valve. 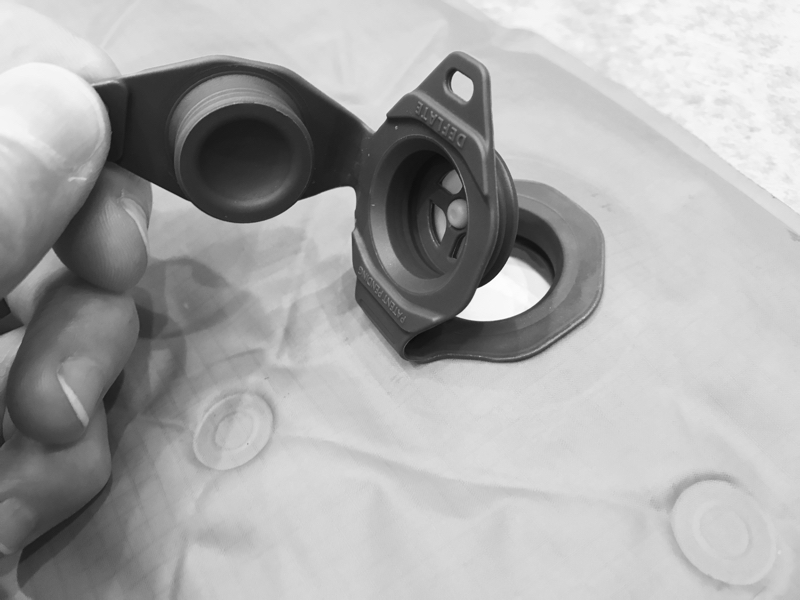 But wait, that's not all. If you pull the innermost flap containing the check valve, it opens a gaping hole in the pad. When I pulled the second flap out while laying on the pad, all of the air in the pad rushed out in a single, high velocity blast. All of it. No second step of rolling and squeezing any remaining air.

This multi-function valve design lets me quickly inflate in the evening, and quickly deflate and pack up in the morning. To me, the valve alone makes this lightweight pad a keeper.

In terms of comfort, the Sea to Summit is average. Rolling onto my side, the pad kept my hips from reaching the ground. Rolling onto my back, it's wide enough to keep my elbows off the hard ground. It's somewhat warm. It's reasonably quiet. It didn't pop and the valve never leaked for 2000+ miles. You don't get awards for that stuff — that should be the bare minimum.

Now that I'm writing this, the only standout, gee whiz, or-ma-gorsh feature is that valve. It's the cat's pajama's. The bee's knee's. The kipper's whiskers. The monkey's eyebrows. Sea to Summit knows it too. They highlight the valve on their product page.

Therm-A-Rest seems to believe that it has no competition and so it doesn't improve the third-rate features of its flagship pads.

So why write this review? It seems that the NeoAir is the darling of inflatable pads for thru-hikers, but perhaps only out of momentum. The majority of thru-hikers that used them had patched them several times or simply put up with reinflating it every hour or two during the night, as if this were an acceptable feature of an inflatable pad. It isn't. There are other pads out there with compelling features that have nothing to do with weight. Any NeoAir-ian who cared to notice the valve on my Sea to Summit suddenly had a jealous streak, and for good reason.

In short, don't just buy the NeoAir because everyone else does. Therm-A-Rest seems to believe that it has no competition and so it doesn't improve the third-rate features of its flagship pads. If you are in the market for an ultralight inflatable pad, get the best pad you can afford. I did, and it was the Sea to Summit Ultralight Insulated.