As part of the Big Three , I fretted about taking a quilt to the PCT—but after starting the trail, I stopped worrying about it and started loving it. I ended up trusting it so much that I just forgot about it. If that not a sign of good gear, I don't know what is.

As always, my perspective on this piece of gear comes from my time with it on the Pacific Crest Trail. I used my Revelation quilt for around 160 nights in nearly every temperature and weather imaginable: oppressive heat, well-below-freezing, cloyingly humid, nose-bleed dry, heavy snow, heavy rain, inside a tent, and cowboy camping at 11,200 feet. I've been everywhere, man.

Let's get the specs out of the way, shall we? My model is a built-to-order Revelation 20°, 6'6" length, 54" wide, 950 fill power DownTek down (treated), with all 10D nylon, and no weather resistant stripes. The Revelation has a zipper, cinch, and snap foot box closure, and it includes two pad straps to keep the quilt in place at night. My 2016 version weighs in at 19oz and it rings up at $370 USD. The late 2017 models have a little more down in them, so a quilt with the same specs will weigh a teeny bit more but will be warmer—and that's a good thing. 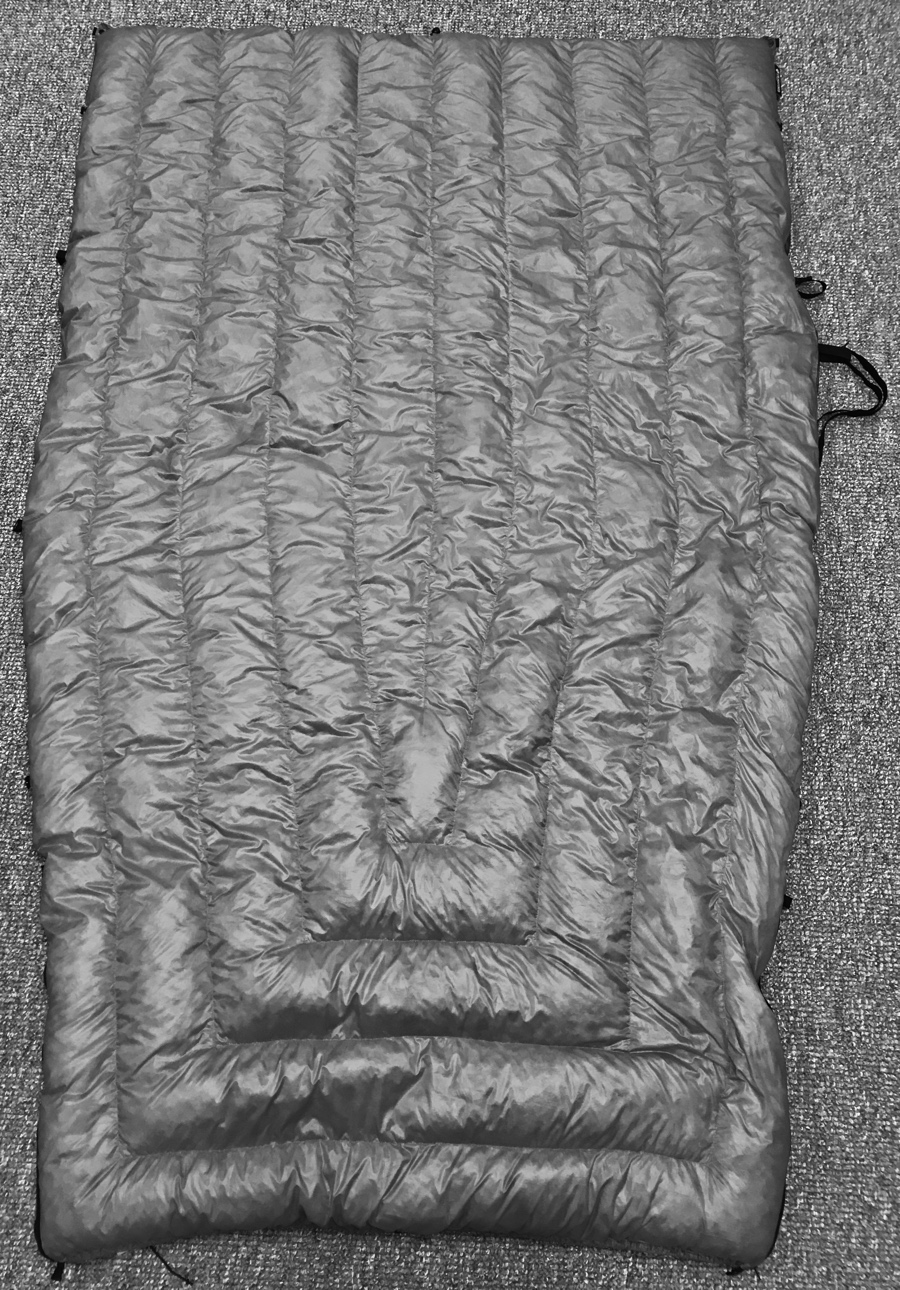 The outer shell is made of a semi-transparent, DWR-coated 10D nylon, which contributes to its feather weight (pun intended) of 19oz. Despite being very thin material, it's quite durable. I have no holes, rips, tears, or abrasions on the inner or outer shell. One thing I did notice was that the shiny finish that the Revelation had when it first arrived is now gone, replaced with a duller sheen. That means the DWR finish is probably gone too. That happens with use and isn't really a indicator of failure or damage.

The shell material is supposed to be down-proof and it is for the most part. Every once and a while I might find a little feather poking out through a seam in the shell, but not anywhere else. This is pretty much par for the course on any down product, quilts included.

The stitching appears to be roughly 8 stitches per inch, which seems to be pretty average. I'm no expert, but I assume that if there are too few stiches, the product will fall apart quickly. If there are too many stitches per inch, you run the risk of weakening the already very thin nylon. 8-10 stitches per inch appers to be the sweet spot for 10D nylon and Enlightened Equipment chose the lower end of the range. Whatever the case, it seems (pun intended, again) to work. The seams in my Revelation are all still intact, even after daily use for 6 months. Areas where the shell is stressed, like the corners, baffle ends, and pull cord openings are all back-stitched. Back-stitching reinforces those points with a little extra stitching. That's a good thing, and it seems (Sorry. Pun intended, again) to have produced a more durable product.

The two pad straps that come with the Revelation are helpful, but nothing really special. One is a stretchy, adjustable strap and the other is stretchy, but non-adjustable. No durability issues with either. They snap into flat buckles on each side of the quilt and hold the quilt on the sleeping pad. Um, good job, straps? 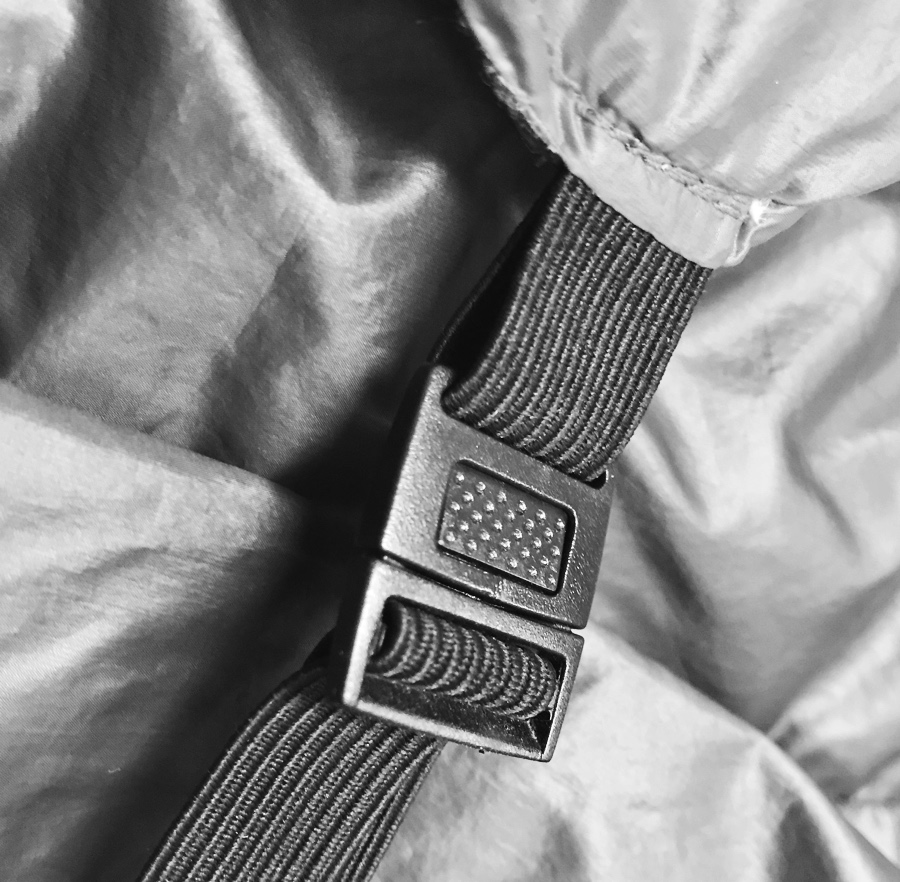 The Revelation uses cinches, zippers, and snaps for anything that needs closing up. The snaps hold together quite well under moderate stress, but they do come apart rather easily at the head end of the quilt. Other snaps are strategically located at each end of the foot box zipper which reinforcing stress points on the zipper, which is a great idea. If it's going to have a zipper, it better work. 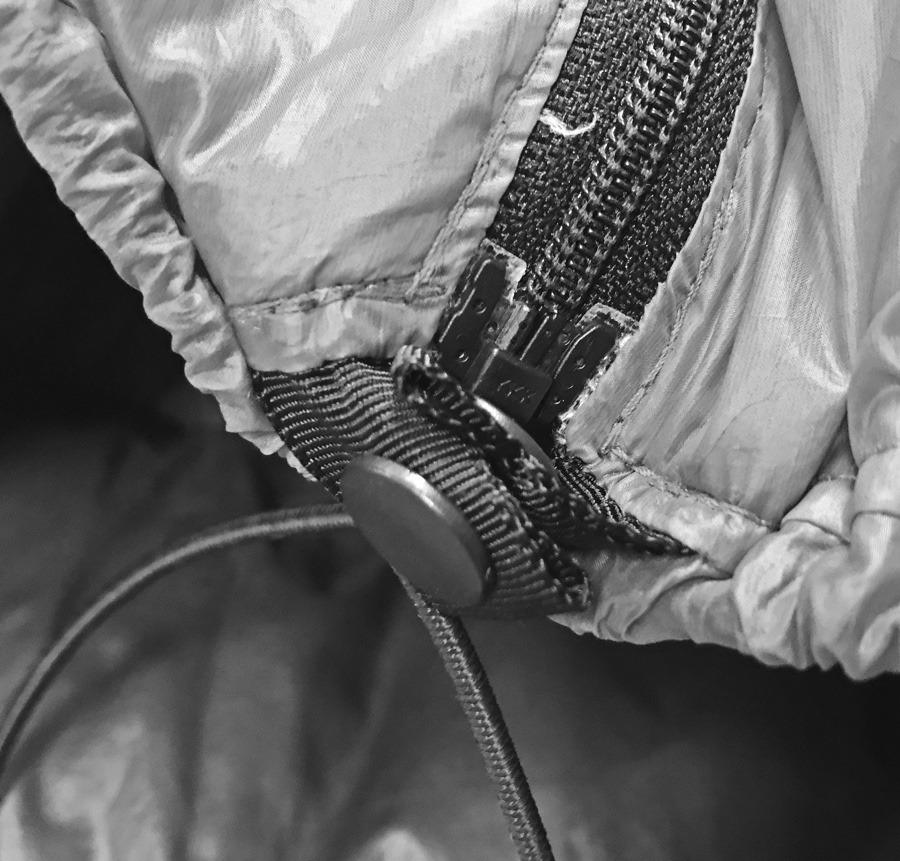 This bottom snap keeps the zipper from failing. Good idea.

The zipper closes up the foot box to rougly mid-calf, with two snaps after that to close it up even further. This is helpful on the really cold nights. It's a nice touch. 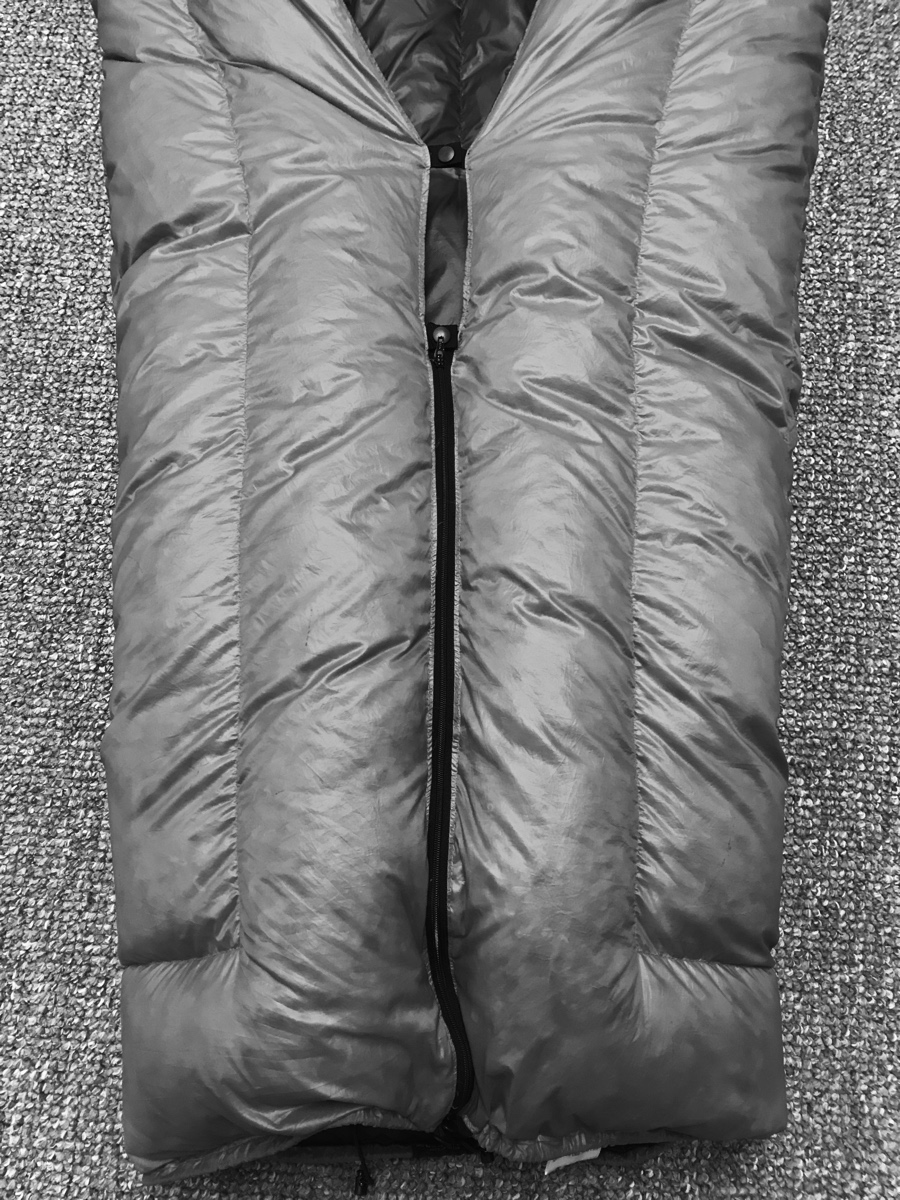 The footbox closed up.

The two pull cord cinches at the foot of the quilt can be pulled tight to close up the end of the foot box. This works reasonably well, but leaves a very small hole in the end of the foot box that will keep out all but the most determined drafts. I usually shove a sock in the opening if it becomes bothersome. The cords on my quilt are really long. I could probably cut a good 8 or 9 inches off and still be able to open the foot box as wide as it goes.

At the neck, I can snap the two corners of the quilt around my neck and pull the centrally located cinch to stop any pesky drafts from coming in around my head. This strategy works for the most part. There is no collar baffle like you would find on higher end sleeping bags or quilts, so it's not as draft-proof as it could be. That said, I didn't really consider it to be a problem. Some quilt manufacturers, like Katabatic, include a down-filled collar baffle, which is very effective at keeping out drafts. It's something to keep in mind if you are in the market for a new down quilt.

The cinch in the middle is super handy and easy to find in the dark.

My Revelation is rated to 20°F and that rating is pretty spot on, in my opinion. EE recommends getting a quilt with a rating about 10° lower than the conditions you expect to use it in, which allows for a little bit of a buffer in case you sleep colder than normal. In my experience, the Reveleation 20 was comfortable down to about 30°F, which is exactly what EE claims.

As temps slid below 30°F I would often start the night comfy and warm, but by early morning I would have a "phantom" feeling of cold—I wasn't actually cold, but the lack of food in my tummy and lower heart rate made me feel like I was cold. One night, the temperature plummeted to somewhere in the low teens, but I was prepared for that. Since I knew that temps lower than 30° could be uncomfortable with a 20° quilt, I wore extra layers that night, including my hooded down jacket. It worked, but barely. My wet shoes and socks were frozen solid by morning, but I survived. I'm counting that as a win.

I should note that I cowboy camped at Chicken Spring Lake (11,200 feet) in the Sierra, surrounded by snow and ice. I slept pretty comfortably that night in nothing but a thermal top and bottom.

In warmer weather, the 20° rating proved to be a little too much and I would occasionally wake up wet with sweat. This was often the case in humid weather in NorCal and pretty much all of Oregon. To combat sweating, I would simply open the quilt completely and just lay it lightly over me like a blanket. Warm weather was one of those times that I was glad I had a quilt instead of sleeping bag.

I guess if I were to do the Pacific Crest Trail over again and money were no object, I'd have two quilts: a 30° for warmer sections of the trail and a 0° for the colder sections. My 20° quilt kind of split the difference, but it was the perfect quilt only a handful of nights. More often, it was too warm or a bit on the chilly side. Oh well. Nothing is perfect.

I ordered my quilt with 950 fill power down. All that means is that an ounce of down will expand to fill 950 cubic inches of space. Compared to 20° quilts stuffed with 850 or 900 down, 950 provides the same temperature rating with less down. In other words, its a poofier down that makes a lighter quilt.

Humidity, moisture, rain, and snow. These are all mortal enemies of down anything, and down quilts are no exception—even down treated with DownTek. It is important to understand that down treated with water-resistent coating is not waterproof. Treated down will resist the effects of moisture a little bit longer than untreated down, but it will capitulate to water. After that, down is absolutely useless, so you have to keep it dry. If it does get wet, you need to dry it as throroughly as possible and as soon as possible. Soaked down clumps up and takes forever to dry out and poof up again.

Drying out the quilt was usually simple and quick. If it was sunny, ten minutes in direct sunlight would dry out the down and give it a nice, warm puffy feeling when I packed it away again. I never had it on trail where the quilt was so wet that I couldn't dry it out during lunch. That won't be the case for everyone. Lucky me, I guess.

Sleeping in a single wall tent, I occasionally had to deal with moisture build-up inside the tent. When condensation or humidity was really bad, moisture would run down the inside of the tent walls and drip onto the shell of my quilt. The shell of the Revelation is DWR coated, but that only lasts so long. Toward the end of the trail, I noticed the bag was surrendering to the effects of moisture more easily. I wasn't any colder, but the outside of the quilt was definitely "wetter" than when I started the trail. This isn't really a fault with the Revelation in particular, but more with down in general.

When packing the quilt, the Revelation with 950 down stuffs down super small, so it doesn't take up much space in my pack. That was something I was disappointed with regarding sleeping bags—they just don't seem to pack as well as I think they should. With that said, I did notice that the process of jamming the quilt into my pack and taking it out again every day made the down move around inside the baffles. Curiously, the down seems to collect in the foot box. A quick shake usually moves it back into place, but not always. If I don't shake or smooth the down into place, it leaves some cold spots in the quilt. If there were some easy way to fix this, perhaps by dividing up the baffles a little more, it would greatly improve the overall usability of the quilt.

The Enlightened Equipment Revelation 20 is a very good, well priced down quilt. I had originally planned to use a Mountain Hardware Phantom 15 (the long version) on the Pacific Crest Trail. Even though it's a very good down bag, at 2 lbs 4 oz it weighed far more than a comparably rated quilt. Because down traps the most heat when it's at full loft, the compressed down underneath me in the Phantom 15 did pretty much nothing to keep me warm. It was just extra down, extra nylon, and extra weight. A quilt recognizes this fact and simply does away with all that extra material, and relies on a good sleeping pad to trap the heat instead.

Shortly before leaving for the PCT, I ordered my Revelation quilt. I don't regret ditching the sleeping bag, not even a little bit.

I can say without a doubt that if I were to do another thruhike of the PCT, I would absolutely go with a down quilt. Would I go with a Revelation again? Maybe. I might consider going with Katabatic, but for the same temperature rating they seem a little heavier and are definitely more expensive. If the quality goes up, then the extra weight and expense might be justified. That said, if you are looking for a new quilt or want to replace your heavy, bulky sleeping bag with something lighter, the Enlightened Equipment Revelation is a solid choice.

Subtle is a simple & elegant Ghost theme for writers and bloggers. Feedback, questions, or ideas? Drop us a line via email.